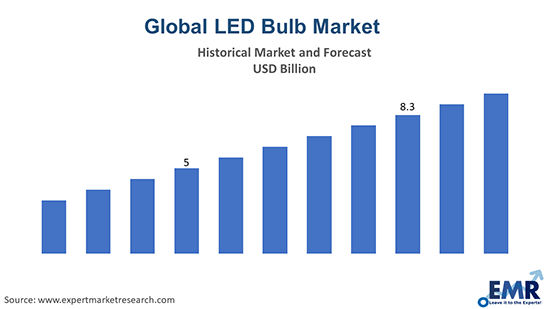 Based on the application, the retrofit segment dominated the market in 2020, followed by retail and hospitality, as LED bulbs are swiftly replacing the conventional lighting systems. Regionally, India accounted for a significant share of the LED bulb market on account of the increase in the local manufacturing of LED products and several government initiatives.

Light emitting diodes (LEDs) are one of the latest technological advancements in the lighting industry. LED bulb refers to an electric lamp comprising of numerous clusters of LEDs which are mounted on a base. In comparison to the conventional lighting sources, LED bulbs are associated with many advantages such as compact size, reduced energy consumption, long lifespan, and radiate lesser heat output. Also, LED bulbs are eco-friendly and offer a better colour rendering index (CRI) with zero toxic elements. Additionally, they are available in different shapes, colours, wattages, while some models are also equipped with dimmable controls. On account of this, LED bulbs are widely used in general lighting, healthcare, signal and signage, forensics, and street lighting. 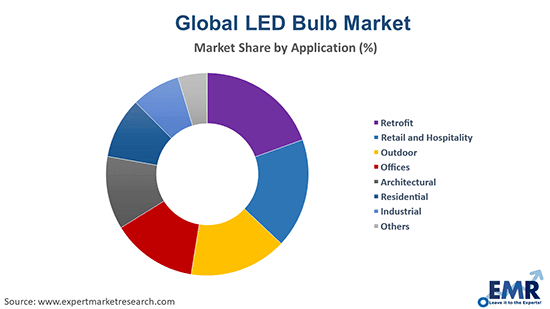 The LED bulb market can be broadly segregated on the basis of application segment into:

The EMR report looks into the regional markets in the global LED bulb market like North America, Europe, Asia Pacific, Latin America, and the Middle East and Africa.

LED bulbs are widely used in various verticals such as automotive, healthcare, general lighting, mobile devices, forensic, signal and signage, street lighting, and academics. Owing to the rapid urbanisation and industrialisation in the emerging economies, the demand for LED bulbs is expected to increase across various end-use industries. Furthermore, escalating global population and increasing sales of consumer electronics is likely to create a surge in electricity consumption. Increasing consumption of electricity, however, has not been supplemented by adequate electricity production, which in turn led to the growing demand for energy-efficient products like LED bulbs.

Further, increasing installations primarily drive the LED bulb market. It includes lights used in streetlights, downlights, high bays, track lights, and suspended pendants for various applications. Also, manufacturers are using unique marketing initiatives through different advertising mediums such as newspapers and television to increase consumer awareness about the advantages of these bulbs and expand their consumer base. Additionally, various awareness campaigns and policies in various countries for environmental protection and energy conservation are expected to augment the demand for LED bulbs over the forecast period. Also, constant encouragement by government and other regulatory bodies, along with rising product awareness amongst the population, is expected to impel the market growth. As a result, LED bulbs have emerged as one of the significant energy-efficient lighting solutions, which are envisaged to drive the LED bulb market forward in the coming years.

The report gives a detailed analysis of the following key players in the global LED bulb market, covering their competitive landscape, capacity, and latest developments like mergers, acquisitions, and investments, expansions of capacity, and plant turnarounds:

What was the global LED bulb market size in 2020?

The global LED bulb market reached a value of USD 5.9 billion in 2020.

The major drivers of the industry include rising disposable incomes, increasing population, rising industrialisation, and infrastructure sector, and the increasing sales of consumer electronics.

The constant encouragement by government and other regulatory bodies is expected to be a key trend guiding the growth of the industry.

The retrofit segment accounts for the largest market share, among other application segments in the industry.

The leading players in the market are General Electric Company, Cree Lighting, Osram, and Signify Holding, among others.

The global LED bulb market attained a value of USD 5.9 billion in 2020 driven by the growth in the infrastructure industry. Aided by the various awareness campaigns and policies in various countries for environmental protection and energy conservation, the industry is expected to witness a further growth in the forecast period of 2023-2028, growing at a CAGR of 9.8%. The industry is projected to reach USD 10.3 billion by 2026.

EMR’s meticulous research methodology delves deep into the industry, covering the macro and micro aspects of the industry. On the basis of application, the retrofit sector accounts for the largest share in the global industry. The major regional markets for LED bulb are North America, Europe, the Asia Pacific, Latin America, and the Middle East and Africa, with the Asia Pacific accounting for the largest share of the market. The key players in the above industry include General Electric Company, Cree Lighting, Osram, and Signify Holding, among others.