Global P-Tolualdehyde Market to Grow at a CAGR at a Healthy Pace During 2021-2026, Driven by the Flourishing Fragrances Industry 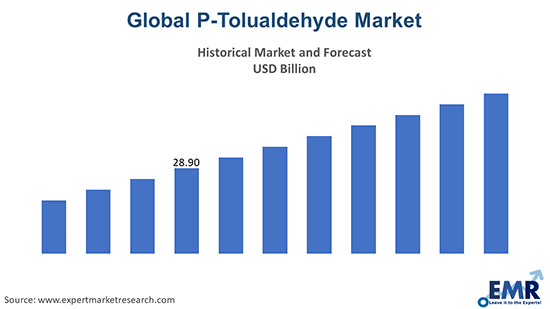 The p-tolualdehyde industry is being driven by the rising demand for fragrances, which is increasing owing to the rising disposable incomes, increasing standards of living, and rapid urbanisation. Regionally, the Asia Pacific region is a significant market for p-tolualdehyde, which has been affected positively by the shift of the chemical manufacturers to the region, as well as the rising consumption rate of the product. On account of this, the Asia Pacific region is expected to witness a healthy growth in the forecast period. Other regions, such as North America and Europe, are matured and, due to stringent government regulations, are expected to witness moderate growth in the coming years. The South Africa market is also predicted to have a significant growth due to the generation of abundant opportunities for fragrance manufacturers in the region. 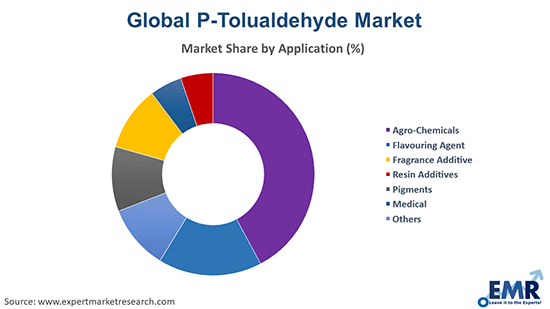 P-tolualdehyde, also known as para- tolualdehyde, is an aromatic aldehyde. It has a cherry-like fragrance just like benzaldehyde. It is a colourless liquid and has a higher density than water. The product is extensively used in preparing fragrances.

On the basis of types, the market is bifurcated into:

By applications, the market is divided into: 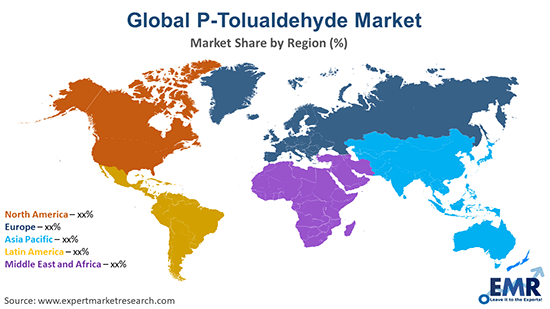 The rising demand for p-tolualdehyde in industries such as food and beverages, where the product is employed as a flavouring agent, is driving the market for p-tolualdehyde. Also, due to the high prominence of the product in the fragrances market, the p-tolualdehyde industry is expected to have a significant growth in the forecast period. Other factors, such as the rising disposable incomes and improving living standards, are driving the market growth further as affordability for leisure items increases, further influencing the buying patterns and inclinations towards grooming products and eating out. Further, p-tolualdehyde’s documentation under the GRAS (Generally Recognized as Safe) chemicals by the United States Food & Drug Administration (US FDA) is expected to impact the market positively. The growing inclination of consumers to buy products having natural and safe chemicals is expected to aid the market growth in the coming years.

The report gives a detailed analysis of the following key players in the global p-tolualdehyde market, covering their competitive landscape, capacity, and latest developments like mergers, acquisitions, and investments, expansions of capacity, and plant turnarounds:

What was the global p-tolualdehyde market size in 2020?

The global p-tolualdehyde market is being driven by the growth of the flavours and fragrances market, which attained a value of nearly USD 28.9 billion in 2020.

The flavours and fragrances market is projected to grow at a CAGR of 5% between 2021 and 2026; thus, further aiding the growth of the p-tolualdehyde industry.

The major drivers of the industry, such as rising disposable incomes, increasing population, increasing hygiene awareness, rising demand for flavours and fragrances, rapid urbanisations, and improving standards of living, are expected to aid the market growth.

The key trend guiding the growth of the market includes the rising allowance of the product by regulatory authorities.

What are the major regional markets of p-tolualdehyde, according to the EMR report?

What are the leading types of p-tolualdehyde in the industry?

The leading types of p-tolualdehyde in the industry are food grade and industrial grade.

The major application segments in the market are agro-chemicals, flavouring agents, fragrance additives, resin additives, pigments, and medical, among others.

The major players in the industry are Mitsubishi Gas Chemical Company, Inc, Merck KGaA, and Augustus Oils Ltd., among others.

EMR’s meticulous research methodology delves deep into the market, covering the macro and micro aspects of the industry. Based on types, the market is divided into food grade and industrial grade. On the basis of application, the industry is segmented into agro-chemicals, flavouring agents, fragrance additives, resin additives, pigments, and medical, among others. The major regional markets for p-tolualdehyde are North America, Europe, the Asia Pacific, Latin America, and the Middle East and Africa. The key players in the above market include Mitsubishi Gas Chemical Company, Inc, Merck KGaA, and Augustus Oils Ltd., among others.