Global 3D Audio Market to Reach USD 14.7 Billion by 2026, Aided by the Developments in the Entertainment Industry 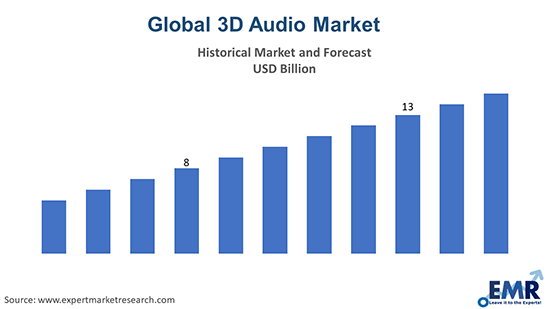 The global 3D audio industry is dominated by the North America region. This can be attributed to the increasing demand for enhanced audio experience, high consumer disposable incomes, and the availability of advanced technologies in the region. Further, the strong presence of leading companies in the region like Dolby Laboratories and Comhear Inc., among others has significantly contributed to the market expansion in North America. Meanwhile, the Asia Pacific is expected to witness a robust growth in the forecast period owing to the ongoing development in the region’s media and entertainment sector. The improving standards of living and the rising adoption of core communication technologies in the region are expected to provide enhanced growth opportunity for the market expansion over the forecast period.

3D audio, an acoustic system, is used to make sound in three-dimensional space for the intended audience. It refers to the utilisation of binaural sound systems to record, process, and replay audio waves. 3D audio effects are used to manipulate the sound produced by stereo speakers, surround-sound speakers, and headphones, among others. The use of 3D audio allows listeners to experience an audio that mimics real life. 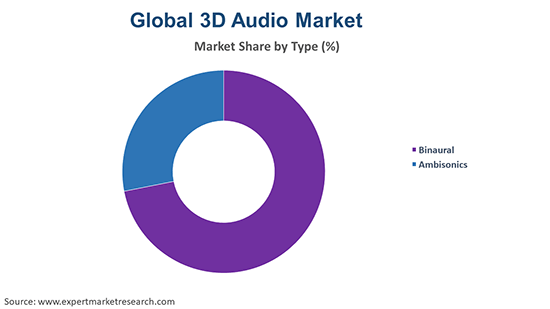 The market is bifurcated based on component into:

Among these, the outsourced segment is further divided based on type into IFM and others.

On the basis of products, the industry can be segmented into:

By sound type, the industry can be categorised into:

Based on end use, the market is divided into: 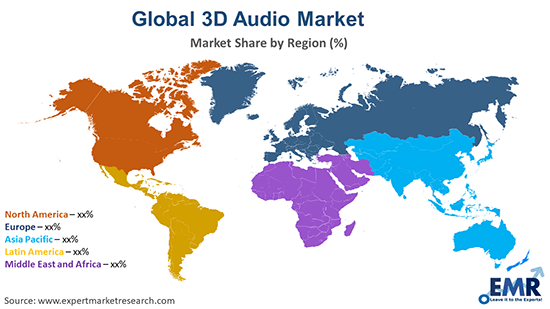 The global market for 3D audio is being driven by the ongoing developments in the media and entertainment sector. The 3D audio technology is proving to be an important part in both virtual reality (VR) and augmented reality (AR) applications. The increasing deployment of 3D audio systems in gaming consoles, home theatre, and other devices is significantly contributing to the industry growth. Further, the market is also supported by the growing consumer electronics industry, which, in turn, is pushing the growth of the 3D audio industry. Other factors like the increasing middle-class population, growing retail sector, and improving standards of living are also boosting the industry growth. Over the forecast period, the rapid technological advancements and the new product launches by the leading manufacturers are expected to favour the market growth.

The report gives a detailed analysis of the following key players in the global 3D audio market, covering their competitive landscape, capacity, and latest developments like mergers, acquisitions, and investments, expansions of capacity, and plant turnarounds:

What is the growth rate of the global 3D audio market?

The major drivers of the industry, such as the developments in the media and entertainment industry, advancements in virtual reality (VR) and augmented reality (AR), thriving consumer electronics sector, escalating disposable incomes, and the increasing demand for enhanced gaming experience, are expected to aid the market growth.

What are the key industry trends of the global 3D audio market?

The key market trends guiding the growth of the industry include the growing technological advancements and the launch of new products by the major players.

What are the major regional markets of 3D audio, according to the EMR report?

What are the leading components of 3D audio in the market?

The leading components of 3D audio in the market are software and services.

What are the major products of 3D audio in the industry?

The major products of 3D audio in the industry are loudspeaker, headphones/earphones, sound bars, and ARVs, among others.

What are the significant sound types of audio in the market?

The significant sound types of audio in the market are binaural and ambisonics.

What are the major end use sectors in the industry?

The major end use sectors in the industry are commercial and personal, among others.

The global 3D audio market is being driven by the rising consumer electronics sector. Aided by the advancements in virtual reality (VR) and augmented reality (AR), the market is expected to witness a further growth in the forecast period of 2023-2028, growing at a CAGR of 16%. The market is projected to reach USD 14.7 billion by 2026.

EMR’s meticulous research methodology delves deep into the market, covering the macro and micro aspects of the industry. Based on component, the market is divided into software and services. By product, the industry is segmented into loudspeaker, headphones/earphones, sound bars, and ARVs, among others. On the basis of sound type, the market is bifurcated into binaural and ambisonics. Based on end use, the market is segmented into commercial and personal, among others. The major regional markets for 3D audio are North America, Europe, the Asia Pacific, Latin America, and the Middle East and Africa, with North America accounting for the largest share of the market. The key players in the above market include Dolby Laboratories Licensing Corporation, Waves Audio Ltd, Auro Technologies Inc., Comhear Inc., Sennheiser Electronic GmbH & Co. KG, and Dysonics, among others.