The Asia Pacific region is the leading region in terms of consumption, with China being the largest consumer nation. The region alone accounts for almost 60% of the consumption share, which is more than 70 million tons. The Asia Pacific region is followed by Europe and North America, contributing a significant share to the consumption growth. The end-use sector is dominated significantly by the pharmaceuticals sector, accounting for 70% of the acetonitrile market share. 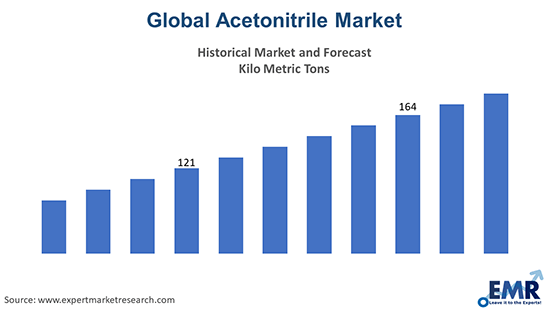 China is the leading consumer nation, along with being one of the major producers. In 2017, the total manufacturing output in China reached a volume of around 10 million tons. The rising demand for the product in the region is widely being supported by its increasing application in the end-use industries. The product finds wide end-uses as a solvent, HPLC solvents, semiconductor cleaning agent, and fine chemical intermediates. The rising demand in the application sector has provided an impetus to the growth of the acetonitrile market in China. 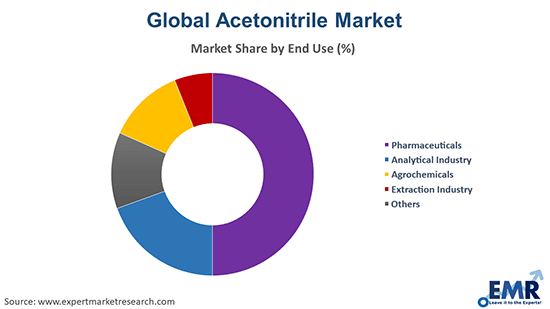 Acetonitrile is a colourless, toxic, water-soluble fluid, with the chemical formula C2H3N, which smells like ether. The chemical is generally used primarily in organic synthesis and as a solvent.

Acetonitrile finds its end uses in the following segments: 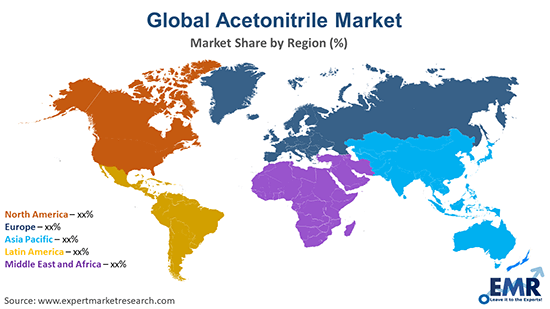 The global acetonitrile market is significantly being driven by the ever-growing pharmaceuticals industry. The demand for pharmaceuticals is rapidly increasing owing to the rising healthcare sector and the advancing technologies. The product is widely being used as solvents in manufacturing insulin and antibiotics. It also finds its uses in DNA synthesis. The pharmaceuticals industry is widely growing, especially in the developing regions of the Asia Pacific regions, with China and India accounting for the highest growth rate.

The acetonitrile market is also being aided by its rising application in the HPCL sector, that is, high-performance liquid chromatography. The rising use of acetonitrile in synthesising several nutrients is also propelling the market growth further. Acetonitrile has wide applications as a solvent in UV spectroscopy, polarography, and lithium batteries. The product helps in the casting, as well as moulding of plastic materials and for spinning fibres. It is also used as a solvent for extracting oleochemicals like fatty acids from animal and vegetable oils. In chemical laboratories, it can be used to detect chemical residues. The increasing use of acetonitrile as a semiconductor cleaning agent and as fine chemical intermediates is also providing an impetus to the acetonitrile market growth.

The report gives a detailed analysis of the following key players in the global acetonitrile market, covering their competitive landscape, capacity, and latest developments like mergers, acquisitions, and investments, expansions of capacity, and plant turnarounds:

The comprehensive EMR report provides an in-depth assessment of the acetonitrile market based on the Porter's five forces model along with giving a SWOT analysis.

What was the global acetonitrile market size in 2020?

The global acetonitrile market reached a volume of around 122 kilo metric tons in 2020.

What are the key industry trends of the global acetonitrile market?

The rising use of the product in the casting and moulding of plastic materials and for spinning fibres is expected to be a key trend guiding the growth of the industry.

Which end-use segment accounts for the largest market share?

The pharmaceuticals sector accounts for the largest market share, among other end-use segments in the industry.

EMR’s meticulous research methodology delves deep into the industry, covering the macro and micro aspects of the industry. On the basis of end-uses, the pharmaceuticals sector accounts for the largest share in the global acetonitrile market of 70%. The major regional markets for acetonitrile are North America, Europe, the Asia Pacific, Latin America, and the Middle East and Africa, with the Asia Pacific accounting for the largest share of the market of 60%. The key players in the above industry include Ineos AG, Asahi Kasei Corporation, Formosa Plastic Corporation, and Imperial Chemical Corporation, among others.