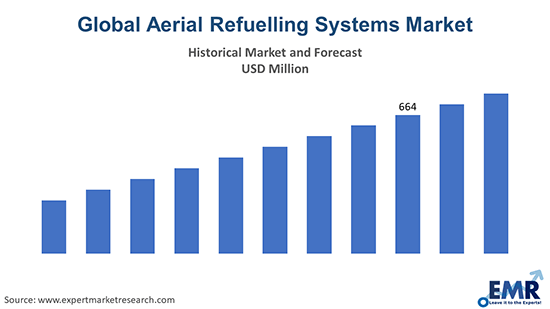 Tanker aircraft demand is expected to rise in tandem with increasing defence budgets in emerging economies, consequently boosting industry sales. With the number of sorties away from ground bases, refuelling has become a critical mission component. The AAR will help deploy to another country on short notice. The aerial refuelling systems industry is predicted to expand as more reliable approaches for increasing aircraft endurance and range are adopted. Aerial refuelling tankers are being upgraded to improve their airspeed, altitude, and range. Industry leaders are working to improve severe-environment suitability, lower lifecycle costs, autonomous service, and roll-on/roll-off capability. Due to the existence of the main refuelling fleets, North America accounted for a significant market share in 2019. About 400 KC-135s and 55 big KC-10s are in the US fleet. The US Air Force and Marine Corps are modernising their fleets in order to maintain their aerial dominance, which would have a positive effect on regional business growth. Furthermore, to improve refuelling capabilities, the area is witnessing the replacement of old refuelling tankers with more versatile ones. This is expected to boost the market growth of aerial refuelling systems. 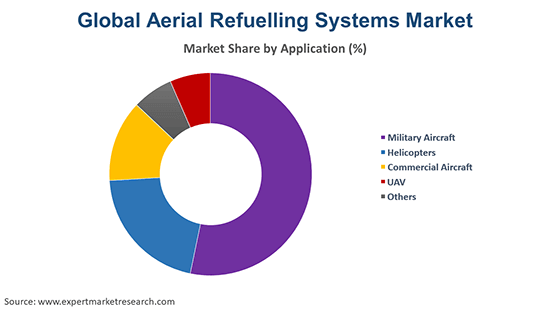 The market is bifurcated in terms of type into:

The market is divided on the basis of systems into:

In terms of component, the market is categorised into:

The market is segmented by application into:

By distribution channels, the market is bifurcated into: 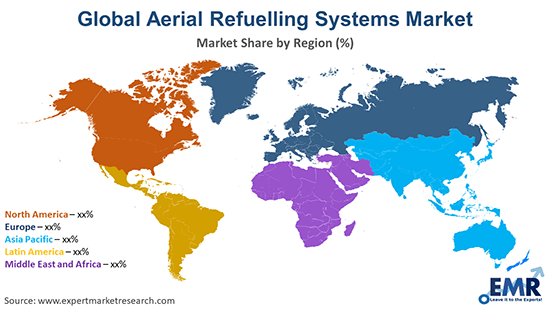 Air-to-air refuelling is becoming more common as it allows planes to take off with less weight. Guns, freight, and staff are all carried on defence aircraft, and if the plane is fully loaded, it may be difficult for it to take off. Air-to-air refuelling allows aircraft to be topped off for long-distance flights as well as loitering. This trend is propelling the aerial refuelling industry forward. Furthermore, inflight refuelling, also known as air-to-air refuelling, has been proposed as a way to reduce fuel usage on long-distance flights. Gas charges will be reduced as a result of the reduced fuel consumption, which will benefit both the airlines and the air forces financially. The demand for aerial refuelling is set to be fuelled by air-to-air refuelling. Furthermore, leading players' increased research and development is driving market growth, and this trend is projected to continue in the forecast period. The military industry and commercial airlines are the end users of the aerial refuelling industry. The air force of all major defence forces around the world uses aerial refuelling extensively because it allows fighter/combat aircraft to take off with less fuel and more payload. During long-haul operations, the commercial carrier uses aerial refuelling services, thereby aiding the market growth.

The report gives a detailed analysis of the following key players in the global aerial refuelling systems market, covering their competitive landscape, capacity, and latest developments like mergers, acquisitions, and investments, expansions of capacity, and plant turnarounds:

Demand for lesser weighted flights, demand for reduced fuel usage, and increasing investments in military are major industry drivers of this market.

Increasing research and development activities taken up by major players in the market, especially for defence purposes are the key industry trends driving growth.

What are the major regional markets of aerial refuelling systems, according to the EMR report?

The major regions in the industry are North America, Latin America, the Middle East and Africa, Europe, and the Asia Pacific, with North America accounts for a significant share in the market.

What are the types of aerial refuelling systems in the industry?

What are the major types of systems in the industry?

The major types of systems in the industry are probe and drogue, flying boom, and autonomous, among others.

What are the components of the product in the market?

The components of the product include refuelling pods, refuelling probes, drogues, hoses, and boom, among others.

The application sectors include military aircraft, helicopters, commercial aircraft, and UAV, among others.

What are the leading distribution channels of aerial refuelling systems?

The leading distribution channels in the market are OEM and aftermarket.

The major players in the industry are Lockheed Martin Corporation, Cobham Mission Systems Wimborne Limited, Eaton Corporation plc and Safran Aerosystems, among others.

The global aerial refuelling systems market has been driven by the increased demand for lesser weighted flights, demand for reduced fuel usage, and increasing investments in military. Aided by the increasing research and development activities taken up by major players in the market, especially for defence purposes, the market is expected to witness a further growth in the forecast period of 2022-2027, growing at a CAGR of 4.5%. The market is projected to reach USD 685 million by 2026.

EMR’s meticulous research methodology delves deep into the market, covering the macro and micro aspects of the industry. Based on its types, the aerial refuelling systems industry can be segmented into manned and unmanned aerial refuelling systems. On the basis of distribution channels, the industry is bifurcated into OEM and aftermarket. The components of the product include refuelling pods, refuelling probes, drogues, hoses, and boom, among others. The application sectors include military aircraft, helicopters, commercial aircraft, and UAV, among others. The major regions in the industry are North America, Latin America, the Middle East and Africa, Europe, and the Asia Pacific, with North America accounts for a significant share in the market.  The key players in the above market include Lockheed Martin Corporation, Cobham Mission Systems Wimborne Limited, Eaton Corporation plc and Safran Aerosystems, among others.