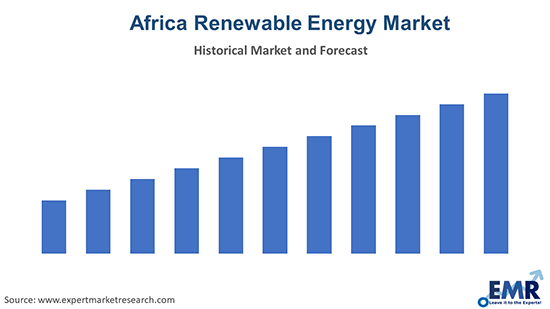 Africa is expected to witness a robust expansion of photovoltaic capacity in the coming years as the country is the production hub for the photovoltaic modules. The leading countries in terms of the largest installed capacity are South Africa, Ethiopia, Morocco, and Egypt. In 2018, the capacity addition in the region grew by more than 15%. The African region is led by South Africa, with the largest capacity installed for hydropower, solar, and wind energy.

Hydropower accounts for the largest share of the Africa renewable energy market, accounting for 68% of the market share. Hydropower is the leading type of energy in the region since most of the countries have efficient hydro energy plants installed for the same, leading to a high growth potential of the resource. The region also enjoys abundant sunlight, which results in increased solar power. The solar power generation can go up to 1100 gigawatts in the region. The investments made for solar energy are higher than those made on hydropower, despite the potential of the latter. The solar capacity in the region witnessed a growth of more than 50% in the recent years. The potential for wind energy is also being explored in the region with large scale wind plants being constructed in Kenya, South Africa, and Morocco. Africa also has good potential for bioenergy owing to the readily available feedstock.

Kenya, a major country within the region, is the only country to adopt geothermal generation due to its geographical location, which provides favourable conditions to develop geothermal energy. Ethiopia is also a major country in the Africa renewable energy market due to its surplus resources. The country has the potential to produce nearly 60,000 megawatts of energy from wind, solar, geothermal, and hydroelectric sources. The market in Ethiopia is likely to increase at a CAGR of almost 20% in the forecast period of 2022-2027. Hydropower accounts for almost 80% of the total renewable energy technology in the country.

Renewable energy is the energy that is generated from sustainable resources, which are naturally replenished on a human scale, like sunlight, wind, tides, rain, waves, and geothermal heat. It helps provide energy in four key areas: electricity production, water, air heating or cooling, transport, and rural (off-grid) energy services. Renewable energy offers multiple benefits, such as no greenhouse gas emissions due to reduced dependency on fossil fuels, increased reliability, low maintenance cost, and can help create a number of jobs. 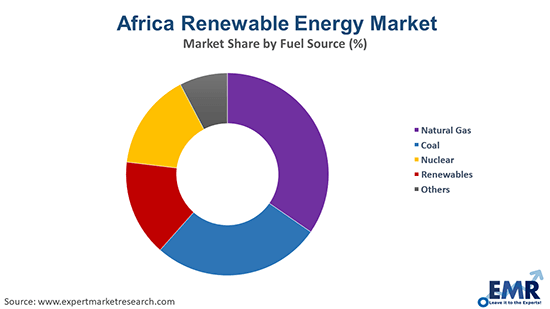 On the basis of type, the market can be divided into:

Based on the fuel source, the market can be segmented into the following:

The EMR report also covers the regional markets like South Africa, Egypt, Ethiopia, and Kenya, among others. 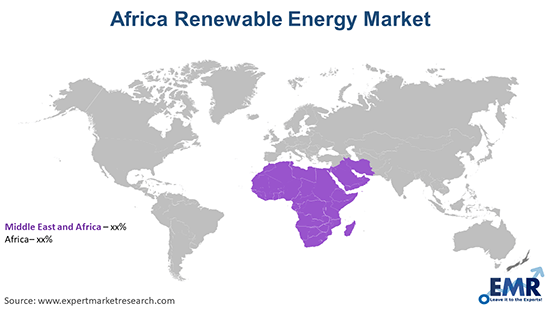 The Africa renewable energy market is being driven by the social as well as economic development in the region. The economy of the region is rising with the ongoing developments, which is providing impetus to the market growth. The region had low penetration of electricity, and with the help of alternative power sources, the region can overcome these problems. Africa has a high availability of resources, especially hydropower and solar energy. The region also has a lot of potential sources for the generation of power from alternative and sustainable sources. The exploration of these new resources can be associated with increased awareness among the population to find long-term solutions to save energy as well as minimise environmental damage to the environment.

In September 2021, the Souapiti hydropower plant in Guinea began to produce 1,900 GWh of clean energy per year and expanded the production of the downstream Kaléta hydro scheme to 1,000 GWh per year. The new Guinean hydropower plant entered into commercial operation following the provisional acceptance marking the transfer of ownership between the project owner, which is the Ministry of Energy and Environment of the Republic of Guinea and the operator Société de Gestion et d’Exploitation de Souapiti.

Additionally, in February 2022, Amazon announced the successful start of its first solar project in South Africa to supply clean, renewable power to AWS data centres and generate economic opportunities for local women and businesses. The new 10-megawatt solar plant is set up to generate up to 28,000 MWh (megawatt-hours) of renewable energy per year. Such developments are expected to positively influence the growth of the Africa renewable energy market.

Furthermore, within the African region, biomass is explicitly used in both domestic as well as the public sphere. Nigeria accounts for more than 95% of the biomass demand to meet the household requirements. The growing need for electricity in the region is expected to further support the market growth during the forecast period.

Key Players in the Market for Africa Renewable Energy

The report gives a detailed analysis of the following key players in the Africa renewable energy market, covering their competitive landscape, capacity, and latest developments like mergers, acquisitions, and investments, expansions of capacity, and plant turnarounds:

The comprehensive EMR report provides an in-depth assessment of the market based on Porter’s Five Forces model, along with giving a SWOT analysis.

What was the Africa renewable energy market size in 2020?

The Africa renewable energy market supports the global renewable market, which attained a installation capacity of nearly 2455 gigawatts in 2020.

What is the growth rate of the Africa renewable energy market?

The major drivers of the industry, such as social as well as economic development, growing need for electricity, and ongoing developments in the industry, are expected to aid the market growth of renewable energy in Africa.

What are the key industry trends of the Africa renewable energy market?

The key market trend guiding the growth of the market includes the rising awareness among the population to find long-term solutions to save energy as well as minimise environmental damage to the environment.

What are the major regional markets of renewable energy in Africa, according to the market report?

The major regions in the industry are South Africa, Egypt, Ethiopia, and Kenya, among others.

What are leading major renewable energy types in the industry?

The major players in the industry are Goldwind, Sustainable Power Solutions, and Scatec ASA, among others.

EMR’s meticulous research methodology delves deep into the market, covering the macro and micro aspects of the industry. Based on renewable energy types, the industry can be segmented into hydropower, wind, solar, bioenergy, solid biofuels, bagasse, and geothermal. The major regional markets for renewable energy in Africa are South Africa, Egypt, Ethiopia, and Kenya, among others. The key players in the above market include Goldwind, Sustainable Power Solutions, and Scatec ASA, among others.