Global Ammonium Perchlorate Market to Grow at a CAGR of 4.5% During 2021-2026, Aided by Aerospace Advancements

The global ammonium perchlorate market is expected to grow in the forecast period of 2023-2028 at a CAGR of 4.5%. 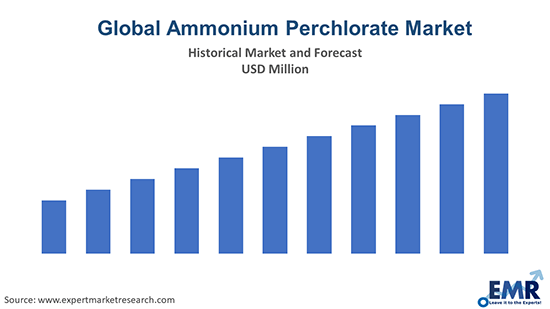 North America to be a Significant Market for Ammonium Perchlorate

China and India are predicted to be the major markets within the Asia Pacific region. China is one of the leading producers of ammonium perchlorate, owing to the rapid growth of the chemical industry in recent years. Ammonium perchlorate is a strong oxidizer and is an essential component of rocket propellants and explosives. The Middle East and African countries like Israel, Saudi Arabia, and Iraq are investing a massive amount in their military and defence departments. Russia, China, and India are also spending a large proportion of their GDP as their military and defence budget. This is further expected to drive the ammonium perchlorate market over the forecast period. 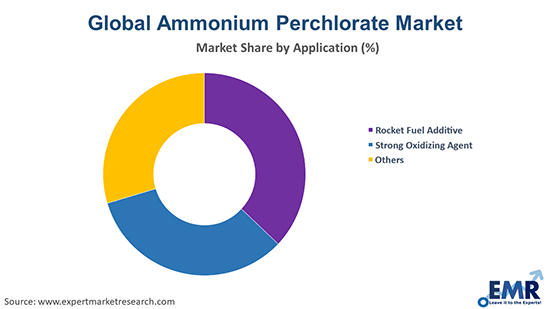 Ammonium perchlorate (NH4ClO4) is a salt of ammonia and perchloric acid. It is a powerful oxidizing agent and is highly explosive. During the oxidation of rocket fuels, oxygen from ammonium perchlorate combines with aluminium to produce a large amount of energy.

Based on the type, the market is classified into:

Based on the end-use, the market is categorised into:

The EMR report looks into the regional markets of North America, Europe, the Asia Pacific, Latin America, and the Middle East and Africa. 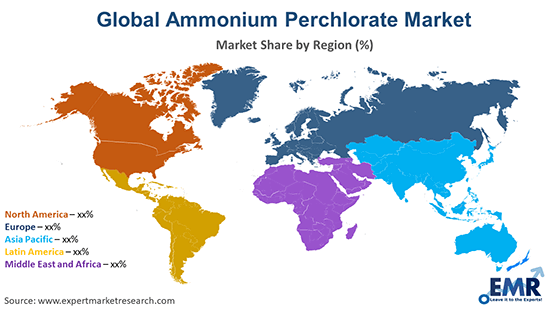 The global ammonium perchlorate market is driven by the rapid technological advancements in the aerospace and defence industry. Global military investments have increased over the years, owing to the rise in terror threats and to maintain security and safety. The primary employment of ammonium perchlorate is in the making of solid fuels. It accounts for nearly three-fourths of the fuel used in spacecraft. Ammonium perchlorate is also used in the making of smokeless flare signals. Its ability to generate huge energy on oxidation makes it perfect for usage in rocket propellants. Ammonium perchlorate is also used in explosives and fireworks due to its strong oxidizing properties. Hence, the growth in the aerospace and defence industry is expected to positively influence the demand for the product in the market over the forecast period.

The report presents a detailed analysis of the following key players in the global ammonium perchlorate market, looking into their capacity, market shares, and latest developments like capacity expansions, plant turnarounds, and mergers and acquisitions:

The global ammonium perchlorate market is projected to grow at a CAGR of 4.5% between 2021 and 2026.

The major market drivers include the rising military and defence investments and growing usage of the product in the automotive and aerospace industry.

What are the key industry trends of the global ammonium perchlorate market?

The key trend steering the market includes the usage of the product in smokeless and ash-less flare signals.

What are the major regional markets of ammonium perchlorate, according to the EMR report?

North America, Europe, the Asia Pacific, Latin America, and the Middle East and Africa are the major regional markets for ammonium perchlorate.

What are the major types of ammonium perchlorate in the market?

The major types of ammonium perchlorate are needle and spherical.

What are the major application segments within the market?

The major application segments within the market are rocket fuel additive and strong oxidizing agent, among others.

What are the end-use segments within the market?

The end-use segments within the market are aerospace and defence, pyrotechnics and fireworks, automotive, and others.

The global ammonium perchlorate market is being driven by aerospace advancements. Aided by the rising investments in military and defence, the market is expected to witness a healthy growth in the forecast period of 2023-2028, growing at a CAGR of 4.5%.

EMR’s meticulous research methodology delves deep into the market, covering the macro and micro aspects of the industry. Based on its product type, the ammonium perchlorate market can be broadly segmented into the needle, and spherical. Based on the application, the market is divided into rocket fuel additive, strong oxidizing agent, and others. By end-use, the market is categorised into aerospace and defence, pyrotechnics and fireworks, automotive, and others. The major regional markets for ammonium perchlorate are North America, Europe, the Asia Pacific, Latin America, and the Middle East, and Africa. The key players in the above market include American Pacific (APC), Aldebaran Sistemas S.L., Pandian Chemicals Limited, Dalian Gaojia Chemical Co., Ltd, and Tanyun Chemical, among others.