Global Ammunition Market to Grow at a CAGR of 3.5% During 2021-2026, Aided by the Increasing Defence Spending and Rapid Technological Advancements 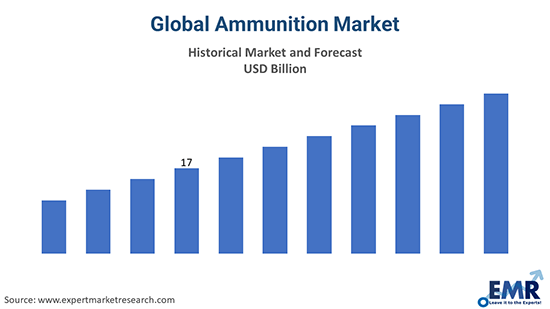 Based on application, the defence sector accounted for the largest share in the market owing to an increase in ammunition procurement by the armed forces or border security forces. This can be attributed to the rising cross-border conflicts, tensions between sovereign nations, increasing terrorism, and rising safety concerns. Over the forecast period, a significant increase in government spending by sovereign nations to enhance their military capabilities is expected to further fuel the demand for ammunition.

The centrefire ammunition, on the basis of product type, is anticipated to hold a significant share in the market. This type is generally used in rifles, shotguns, and handguns, which form an integral part of various military operations, including hostage rescue missions.

Based on calibre, small calibre ammunition is likely to hold a significant share in the market. The ammunition of this calibre is used in light weaponry, which provides the warfighter with the necessary lethality needed to defeat the enemies. These weapons include medium and heavy machine guns, which are highly efficient and ensure precision on the battlefield.

North America accounted for a significant share in the ammunition industry. A substantial increase in military expenditure, the rapid technological advancements in the defence sector, and the rising safety concerns have significantly contributed to the market growth in the region. The United States is one of the leading countries in the world in terms of defence capabilities. Over the forecast period, the increasing efforts by the US government to control terrorism and ensure the safety of its citizens are expected to bolster the demand for ammunition in the region.

Ammunition is defined as the material fired, scattered, dropped or detonated from any weapon or weapon system. It is the most lethal part of the weapon system and plays a decisive role in armed conflicts. Bombs, missiles, grenades, land mines, bullets, and warhead, among others are some of the examples of ammunition. 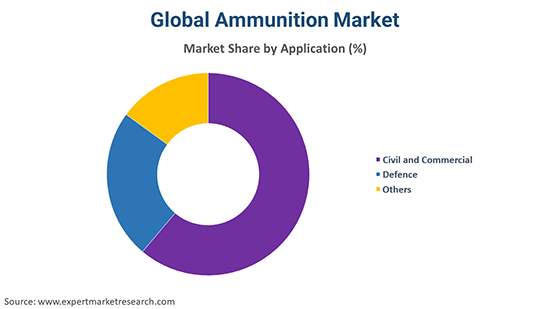 Based on calibre, the market is divided into:

On the basis of product type, the market can be segmented into:

The significant applications of the product include: 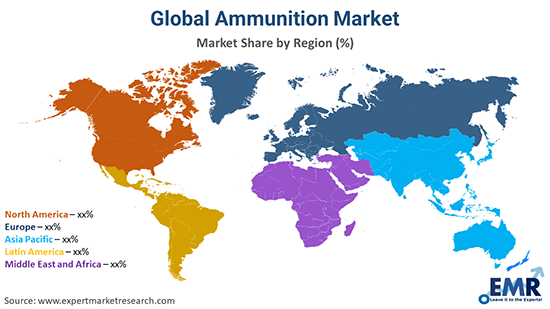 The growing security concerns and the increasing efforts by the government to provide enhanced safety to its citizens are aiding the ammunition industry growth. The market is being driven by the rising demand for ammunition in the defence sector owing to factors like the increasing international conflicts and increased terrorism. Over the forecast period, the favourable government initiatives and the increasing focus of emerging nations to enhance their military capabilities are expected to favour the market growth. Furthermore, the modernisation of weapons such as rifles, handguns, machine guns, and others will require more ammunition than usual. Therefore, it will further augment the market growth.

The report gives a detailed analysis of the following key players in the global ammunition market, covering their competitive landscape, capacity, and latest developments like mergers, acquisitions, and investments, expansions of capacity, and plant turnarounds:

What was the global ammunition market size in 2020?

In 2020, the global ammunition market attained a value of nearly USD 21 billion.

What are the major regional markets of ammunition, according to the EMR report?

What are the significant calibre types of the product?

Small calibre, medium calibre, large calibre, and rocket and missiles, among others are the major calibre types of the product.

What are the different product types of ammunition?

Rimfire and centrefire are the different product types in the industry.

Civil and commercial, and defence, among others are the significant applications of the product.

The major players in the industry are Ammo, Inc., BAE Systems, General Dynamics Corp, Northrop Grumman Corporation, and Hanwha Corporation, among others.

The global ammunition market attained a value of USD 21 billion in 2020, driven by the growing application of ammunition in the defence sector owing to the rising cross-border conflicts and growing terrorism. Aided by the growing technological advancements and the innovations by the key players, the market is expected to witness a further growth in the forecast period of 2022-2027, growing at a CAGR of 3.5%.

EMR’s meticulous research methodology delves deep into the market, covering the macro and micro aspects of the industry. Based on calibre, the market is divided into small calibre, medium calibre, large calibre, and rocket and missiles, among others. By product type, the market is bifurcated into rimfire and centrefire. The significant applications of the product include civil and commercial, and defence, among others. The major regional markets for ammunition are North America, Europe, the Asia Pacific, Latin America, and the Middle East and Africa. The key players in the above market include Ammo, Inc., BAE Systems, General Dynamics Corp, Northrop Grumman Corporation, and Hanwha Corporation, among others.