Global Amphibious Landing Craft Market is Expected to Grow at a CAGR of 4.3% in the Forecast Period of 2022-2027.

The global amphibious landing craft market is projected to grow at a CAGR of 4.3% during the forecast period of 2022-2027. 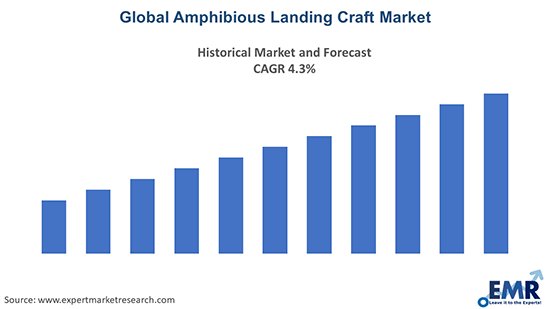 Based on type, the industry is divided into landing craft utility (LCU), landing craft air cushion (LCAC), and amphibious assault vehicle (AAV), among others.

The EMR report looks into the regional amphibious landing craft markets like North America, Latin America, the Asia Pacific, Europe, and the Middle East and Africa.

The report presents a detailed analysis of the key players in the global amphibious landing craft market, looking into their capacity, market shares, and latest developments like capacity expansions, plant turnarounds, and mergers and acquisitions:

What is the growth rate of the global amphibious landing craft market?

The major drivers of the market include the rapid technological advancements and emergence of advanced weapons.

Increasing number of troops deployed by countries like the US, Russia, and China, across their respective allies’ national borders will boost the need for specific variants of amphibious landing crafts, which is the key industry trends propelling the growth of the market.

What are the major regional markets of amphibious landing craft, according to the EMR report?

What are the major types of amphibious landing craft in the industry?

What are the leading operation types of amphibious landing craft?

Based on operation type, the industry is segmented into amphibious operations, naval operations, maritime security, and other operations.

The global amphibious landing craft market, driven by the Increasing number of troops deployed by countries like the United States, Russia, and China, across their respective allies’ national borders. Aided by rapid technological advancements and emergence of advanced weapons, the market is expected to witness a further growth in the forecast period of 2022-2027, growing at a CAGR of 4.3%.

EMR’s meticulous research methodology delves deep into the market, covering the macro and micro aspects of the industry. Based on its types, the amphibious landing craft industry can be segmented into Landing craft utility (LCU), landing craft air cushion (LCAC), and amphibious assault vehicle (AAV), among others. Based on operation type, the industry is segmented into amphibious operations, naval operations, maritime security, and other operations. The application sectors include vehicle transportation and infantry transportation, among others. The major regional markets for amphibious landing craft are North America, Europe, the Asia Pacific, Latin America, and the Middle East and Africa.

The global helicopter MRO services market is expected to grow at a CAGR of 4.7% during the period 2022-2027. The market is likely to be driven by expanding civil and military aircraft and helicopter f...
Read More

The global aviation high speed motor market was driven by the quest for cleaner modes of transport with better environmental performance in the historical period. Aided by the rising demand for sustai...
Read More

The global aviation headsets market was driven by the growing demand for headsets that reduce noise, offer more comfort and enable clear communication during flight in the historical period. Aided by ...
Read More