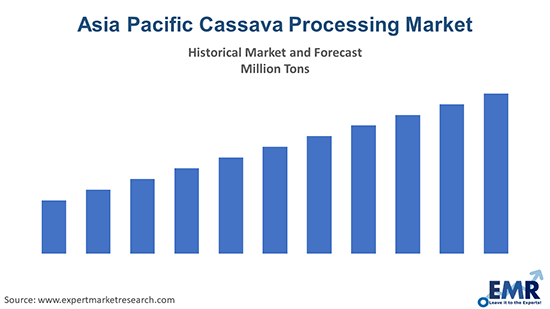 Cassava is a tropical plant whose different parts, including roots, leaves, and stem, can be transformed into a variety of food products. The starchy roots of cassava are a high energy source (carbohydrates) of various food crops, and they can be processed into cassava pellets, chips, flour as well as cassava starch. Most of the product is specifically eaten, and the rest is handled as starch, flour, pellets, chips, etc. Processing cassava helps eliminate the toxins, improves their resilience, decreases their weight, and increases their overall value. Processed cassava is widely used in a range of industries, including milk, fertilizer, paper and carton, cloth, medicine, glues, and adhesives. 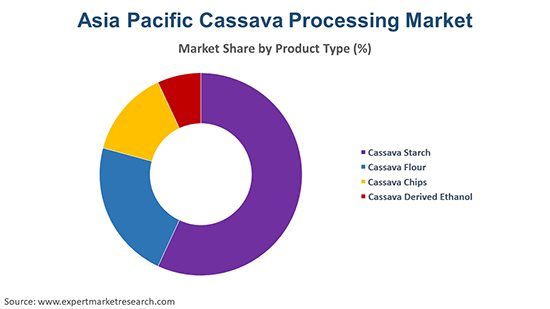 On the basis of product type, the Asia Pacific cassava processing market is divided into:

The product finds wide application in the following sectors:

Industrial applications are further divided into the following:

The major regions included in the market in the Asia Pacific are Indonesia, China, Thailand, Vietnam, Japan, and the Philippines, among others. 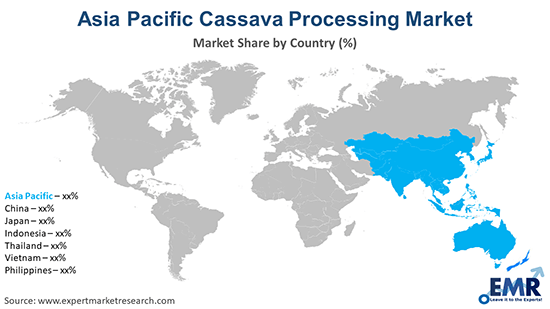 The cassava processing industry in the Asia Pacific is propelled by its growing applications in the end-use industries. It is also extensively used in the textile industry as a stiffing agent and as a protective agent for improving the weaving efficiency of the thread. It may also be used in animal feed as a substitution for maize or barley.

The market for processed cassava is strongly influenced by its increased use in the food industry. Cassava flour is widely demanded to make bakery items such as cakes, biscuits, cookies as well as bread. Processed cassava is often used in the manufacture of confectioneries, including gums, sweets, and others. It can also be used as a thickener in soups, sauces, baby food, gravies, and others. The market for processed cassava has also been helped by its use as a binder for sausages and processed meats to ensure that the cassava does not dry. Also, it is used to produce cassava chips, shrimp sticks, cassava butter cakes, and cookie, among other items. The rapidly rising demand for HFCS and paper production is boosting the market growth.

The growing use of these end-products like confectioneries and bakery products, among others, is significantly impacting the development of the cassava processing market. In addition, various factors like population growth, growing middle class, urbanisation, and increasing consumption of processed food are providing an impetus to the Asia Pacific cassava processing market growth.

The report gives a detailed analysis of the following key players in the Asia Pacific cassava processing market, covering their competitive landscape, capacity, and latest developments like mergers, acquisitions, and investments, expansions of capacity, and plant turnarounds:

The Asia Pacific cassava processing market is likely to be aided by the global market, which reached a volume of nearly 261 million tons in 2020.

The Asia Pacific market is projected to be supported by the global market, which grew at a CAGR of nearly 3% in the historical period of 2017-2021.

The global market is estimated to reach a volume of about 335 million tons by 2026, further propelling the growth of the industry in the Asia Pacific.

The major drivers of the industry include rising disposable incomes, increasing population, rising urbanisation, and the increased applications in the end-use industries.

The rising use of processed products in end-products like confectioneries and bakery products, among others is expected to be a key trend guiding the growth of the industry.

Indonesia, China, Thailand, Vietnam, Japan, and the Philippines, among others, are the leading regions in the market.

What are the major product types in the industry?

The major product types in the industry include starch, flour, chips, and cassava derived ethanol.

What are the leading application sectors for the product?

The leading application sectors in the industry include food, feed, and industrial. Industrial applications are further divided into biodegradable products, biofuels, papers, and textiles, among others.

The Asia Pacific cassava processing market is likely to be supported by the global industry, which reached a volume of nearly 259.57 million tons in 2020, growing at a CAGR of 3% between 2016 and 2020. Aided by the rising applications of the products in the end-use industries, the industry is expected to witness a further growth in the forecast period of 2022-2027.

The global industrial starches market attained a value of USD 51.62 billion in 2021, driven by the rapid growth of the food and food processing industry. Aided by the development of wastewater treatme...
Read More

The global dairy processing equipment market attained a value of nearly USD 9.8 billion in 2021, driven by the rising production and consumption of dairy products. Aided by the growing number of dairy...
Read More

The global UHT processing market attained a value of more than USD 3.7 billion in 2021, driven by the growing applications in dairy products. Aided by the integration of Artificial Intelligence (AI) i...
Read More

The global meat processing equipment market attained a value of USD 10.7 billion in 2020, driven by the growing awareness towards product consistency, production quality, and employee and food safety....
Read More