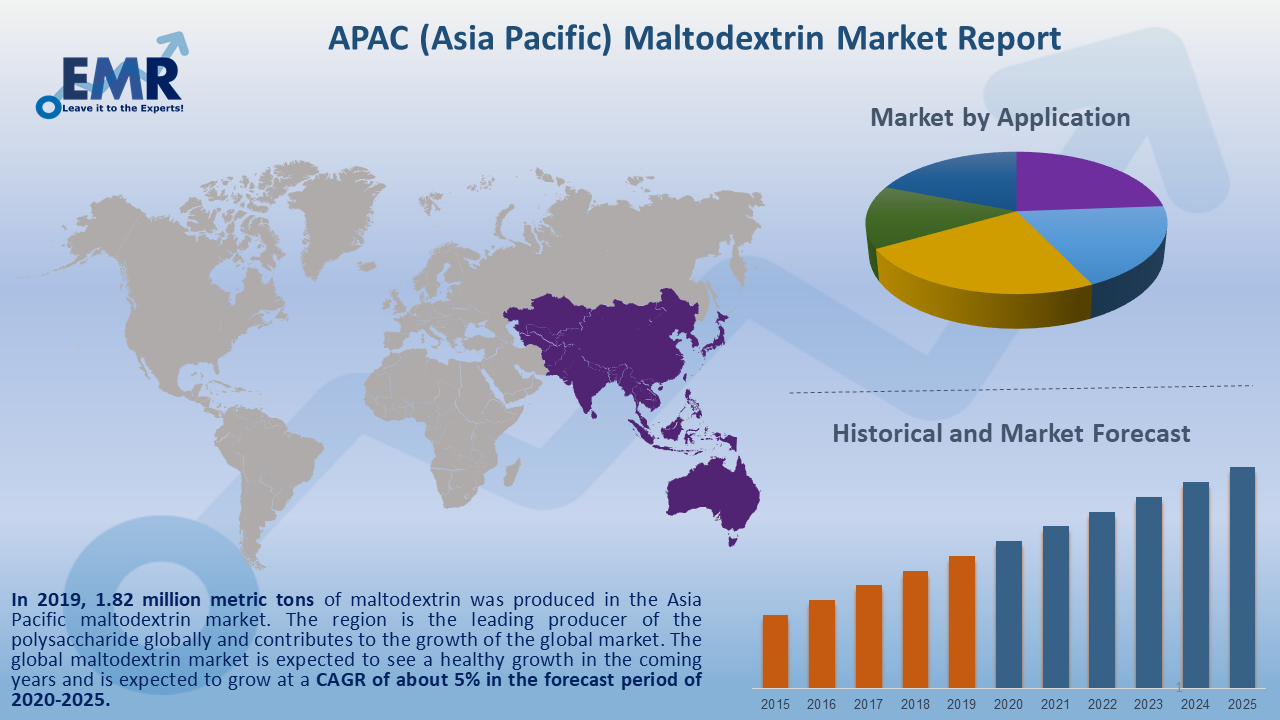 Globally, the maltodextrin industry is heavily dependent on its feedstock market. The polysaccharide is largely derived from corn and corn starch, with almost 70% of the maltodextrin being produced from this feedstock globally. In China and India, too, corn starch is the most common feedstock. China produced almost 20% of the global corn output in the period 2017-2018. In India, maize is a leading food grain, after rice and wheat. Potato and wheat are the other important maltodextrin feedstock grown in India. India is the second largest producer of potato and wheat. In Vietnam and Indonesia, on the other hand, the polysaccharide is generally derived from cassava starch. Indonesia is the largest producer of cassava in Asia.

Maltodextrin, a polysaccharide, is derived from starches like corn, cassava, wheat, and potato starch through the process of partial hydrolysis. It is commonly used as a food additive and has a flavour that varies from being mildly sweet to being devoid of any sweetness. While it finds its primary application in the food and beverage sector, it is also used in sectors like:

The EMR report looks into the maltodextrin markets in China, India, and South East Asia.

The Asia Pacific maltodextrin market is being driven by its robustly growing food and beverage industry, especially in China and India. China, which is the major maltodextrin market in the region, is also the largest food and beverage market in the area. In terms of sales in the food and beverage industry, India is projected to have the fastest growth, followed by China, Indonesia, and the Philippines. The thriving food and beverage industry in the region is the result of rising urbanisation and a growing middle class with increasing disposable incomes. The increase in the middle-class population in China, especially, has led to the growth in the consumption of premium products like high quality packaged food. Easy-to-prepare instant food products are also witnessing a rise in consumption in the Asia Pacific region. The region is also witnessing a growing demand for low calorie and low sugar food products due to a growing awareness about health and lifestyle diseases. Maltodextrin finds its significant application in the food and beverage sector as a food additive in processed products and as a sugar substitute. The increase in the demand for products in these segments in the area is propelling the Asia Pacific maltodextrin market growth. The industry is finding further impetus due to the polysaccharide’s ability to increase the shelf life of products.

The prices of maltodextrin are affected by its feedstock prices. In India, corn prices grew at a steady pace of 4.8% in the period between 2015 to 2017. In China, however, the prices of corn saw a significant decrease, falling from USD 354 per ton in 2015 to USD 269 per ton in 2017. This decrease was a result of the weakening in demand combined with an increase in supply and excess stocks.

The report gives a detailed analysis of the following key players in the market, looking into their capacity, market share, and latest developments like mergers and acquisitions, expansions of capacity and plant turnarounds:

The EMR report gives a detailed insight into the market by providing an analysis of the value chain along with a SWOT analysis. Porter’s Five Forces have also been analysed within the report.