The Asia Pacific sealants and adhesives market attained a value of nearly USD 21.6 billion in 2020. It is expected to witness a steady growth in the forecast period 2023-2028 and is projected to reach USD 28.3 billion by 2026. 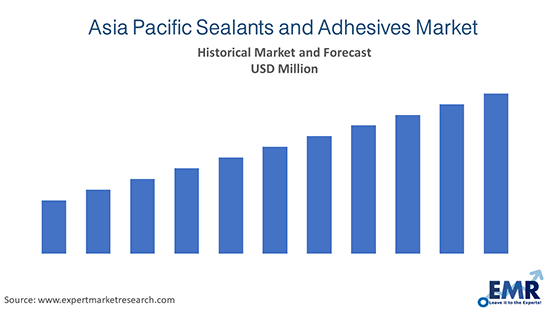 Globally, paper, board and related products along with building, construction, civil engineering, and craftsmen are the major end-use industries for adhesives. Construction is also a major end-use segment for sealants along with consumers and DIY. Silicones are the leading sealant types. Reactive systems and water-based adhesives, on the other hand, are the significant adhesive types. Water-based and hot-melt adhesives are preferred for applications in paper and board, among other related materials. Adhesives are used for various paper and board bonding applications like lamination of sheets, constructions of corrugated boxes, and building packaging materials for a diverse number of consumer products like books, paper towels, and toilet rolls along with large industrial tubes utilised by manufacturers. In construction, a significant application sector for both sealants and adhesives, adhesives find their use in laying tiles and carpets, roofing, flooring, wall coverings, drywall lamination, and timber jointing, among other related applications.

The Asia Pacific is one of the largest markets for sealants and adhesives driven by the rapidly developing emerging economies within the region. China is the leading market in the region accounting for over a half of the regional industry. Japan and India are also some of the significant markets in the Asia Pacific. The healthy growth of the construction industry in China and India is expected to aid the sealants and adhesives market. The global construction industry is projected to attain USD 15.5 trillion by 2030, with China and India along with the US accounting for almost 57% of the expected growth. The infrastructural growth in China is being driven by the expansions planned in the railway network by the China State Railway Group (CR). In India, the construction sector is buoyed by the planned investments into expanding the urban infrastructure and building affordable housing by the government.

Sealants usually have paste-like consistencies and are used to fill in the gaps between surfaces and joints. Adhesives, on the other hand, are used to attach two surfaces with adhesion. While adhesives are stronger than sealants, sealants are more flexible of the two. Sealants are categorised as: 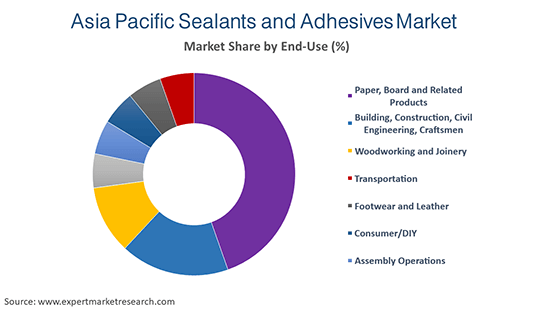 They find their applications in construction, consumer and DIY, transportation, and assembly, among others. Adhesives, on the other hand, find their applications in sectors like paper, board, and related products, building, construction, civil engineering, and craftsmen, woodworking and joinery, transportation, footwear, and leather, consumer/DIY, and assembly operations, among other sectors. They can be broadly be categorised as:

The report also gives an in-depth analysis of the major regional markets in the Asia Pacific like China, India, and Japan.

The Asia Pacific sealants and adhesives market is being driven by the growing infrastructural developments taking place in the region due to the rapid urbanisation. Nearly 60% of the global population resides in the Asia Pacific region. By 2040, the population of the cities in the region is expected to exceed 2 billion. The construction industry is, thus, finding impetus for its growth in the rapidly rising population. The sealants and adhesives industry will find further impetus in the rising construction of smart cities in the Asia Pacific. The investments in smart city technologies is expected to attain USD 45.3 billion in 2021 (excluding Japan).

The healthy growth of the economy in the region is also aiding the market growth, as it is driving the revenue growth of the various end-use sectors of sealants and adhesives like the construction and automotive sector. Between 2020 to 2023, the GDP in the emerging nation in the country is expected to grow at an annual average of 6.1%. India is expected to witness a robust economic growth in the coming five years, with its economy growing at an average of 7.3%.

The report provides a detailed analysis of the key players in the Asia Pacific sealants and adhesives market, covering their market share, capacity, and latest developments like mergers, acquisitions, and investments, plant turnarounds, and capacity expansions:

The comprehensive report by EMR looks into the manufacturing process of sealants and adhesives and analyses the costs involved. It assesses the market based on the Porter’s five forces model. A SWOT, as well as the value chain analysis, has been provided, as well.

What was the Asia Pacific sealants and adhesives market size in 2020?

The Asia Pacific sealants and adhesives market attained a value of nearly USD 21.6 billion in 2020.

The major drivers of the industry include the rising disposable incomes, increasing population, growing construction sector, and rising demand from the application sectors.

What are the key industry trends of the Asia Pacific sealants and adhesives market?

The infrastructural development in China is being aided by the expansions planned in the railway network by the China State Railway Group (CR). This is expected to be a key trend guiding the growth of the industry.

What are the major regional markets of sealants and adhesives in the Asia Pacific, according to the market report?

China, India, and Japan are the leading regions in the market, with China accounting for the largest market share.

What are the leading product types in the market?

The leading product types of adhesives in the market are reactive systems, solvent based, pressure sensitive, water based, and hot melt, while the major product types of sealants are silicones, acrylic, butyls, polysulphides, and polyurethanes, among others.

What are the major end use industries in the market?

While the major end use industries for adhesives are paper, board and related products, building, construction, civil engineering, craftsmen, woodworking and joinery, transportation, footwear and leather, consumer/DIY, and assembly operations, among others, the significant end use industries of sealants are construction, consumer/DIY, assembly, and transportation, among others.

The Asia Pacific sealants and adhesives market attained a value of USD 21.6 billion in 2020, driven by the growth in the construction industry. Aided by the rapidly developing economies, increasing demand from consumers and DIY, and the growing infrastructure sector, the industry is expected to witness a further growth in the forecast period of 2023-2028. The industry is projected to reach USD 28.3 billion by 2026.

EMR’s meticulous research methodology delves deep into the industry, covering the macro and micro aspects of the industry. Based on product types, the market for sealants can be segmented into silicones, acrylic, butyls, polysulphides, and polyurethanes, among others. The product types of adhesives are reactive systems, solvent based, pressure sensitive, water based, and hot melt. On the basis of end use industries, the sealants market is divided into construction, consumer/DIY, assembly, and transportation, among others, while the adhesives market is segments into are paper, board and related products, building, construction, civil engineering, craftsmen, woodworking and joinery, transportation, footwear and leather, consumer/DIY, and assembly operations, among others. The major regional markets for sealants and adhesives in the Asia Pacific are China, India, and Japan, among others. The key players in the above industry include Henkel AG & Company, KGaA, H.B. Fuller Company, Arkema Inc., Sika AG, Wacker Chemie AG, Saint-Gobain S.A, Evonik Chemicals Limited, Pioneer Adhesives Inc., Shandong Evergain Adhesive Co., Ltd, ITLS (H.K.) Co., Limited., and Pidilite Industries Limited, among others.