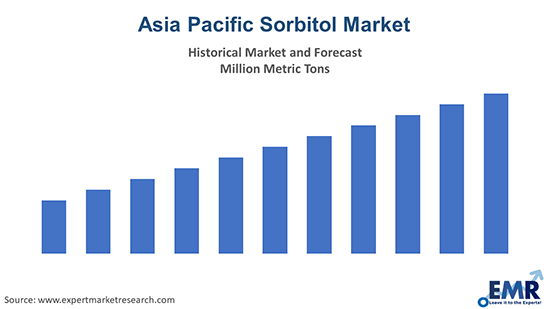 The Asia Pacific is the largest sorbitol market, globally, accounting for over half the global market. Thus, the growing production of the polyol in the region is aiding the global market growth, which is expected to grow at a CAGR of 2.4% in the forecast period of 2022-2027.

The Asia Pacific sorbitol market is expected to continue to lead the global market in the forecast period due to the higher flows of FDI into personal care and pharmaceutical firms in India and China. China, along with India, produces nearly 50% of the global sorbitol output. China is the leading market for the polyol in both the Asia Pacific market and the global market. The Asian country is also a major consumer of sorbitol, globally. The Asia Pacific region also has some largest exporters of the substance like China, India, and Indonesia. Its export in India has witnessed a growth in the recent years, and indicates a growing production of the polyol in the country. Japan, on the other hand, is its leading importer, with major import demand for the polyol stemming from the oral care industry.

Globally, corn is the leading feedstock for sorbitol. The application segments of corn, especially corn starch, is expected to witness a healthy growth in the forecast period. Its industrial and non-food applications are also expected to expand in the coming years. Corn is the primary feedstock from which sorbitol is derived in China. Between 2017 and 2018, China accounted for nearly a fifth of the global corn production. In India, too, corn is a significant feedstock of the polyol with maize being a major food grain in the country after rice and wheat.

Sorbitol is a naturally occurring sugar alcohol or polyol, which occurs in fruits like peaches and apples, among other plants. It is also produced artificially by the catalytic hydrogenation of D-glucose. Other sugar alcohols, also known as polyols, include xylitol and mannitol. Being non-cariogenic, sorbitol is widely used as a sweetener in oral care products, especially in toothpastes. Other than oral care, it finds its application in sectors like: 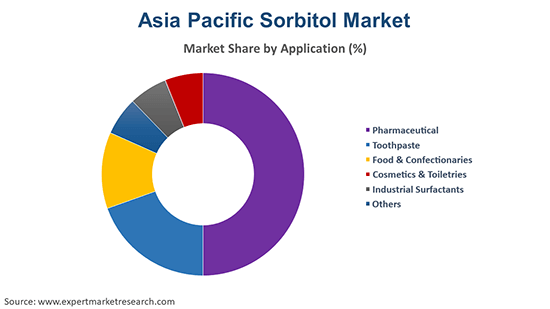 According to its types, it is widely bifurcated into liquid and powder types. The EMR report also provides the market for common feedstock of the polyol like corn, cassava, and wheat. The report also looks into the regional markets in the Asia Pacific region like China, India and South East Asia. 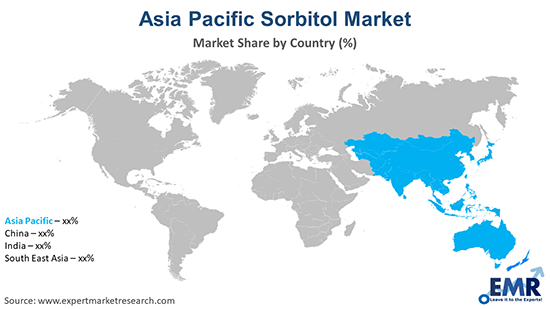 The Asia Pacific sorbitol market is being driven by the expansion in the downstream applications of the polyol. Favourable government policies in the region are also driving the industry. The growing economy combined with a rising middle class in the area is aiding the growth of the market. The rising urbanisation and middle-class population have led to a change in consumption patterns with people seeking out premium and healthier food options. With sorbitol finding a significant portion of its end-use in diet foods like sugar-free candies, chewing gums, and diet soda as a low-calorie sweetener, the growing consumer preference for diet or sugar-free products is aiding the industry growth in the region.

Toothpaste is a major end-use sector for sorbitol and is experiencing a growth in the Asia Pacific region. The polyol is used in toothpastes as a sweetener, which does not harm the teeth by causing cavities. It also keeps toothpastes from drying out. The market in the region is being aided by the rising oral care market in India. With a growing market penetration and investments by major international players in the country, the oral care industry in India is expected to be propelled forward.

In China, the majority of the sorbitol demand derives from the application of the polyol in the production of vitamin C and toothpastes. China is the leading producer of vitamin C in the world and accounts for over 90% of its total global output. With vitamin C being manufactured from sorbitol, the massive production of the vitamin in China is aiding the market in the country. Although the Asian country is one of the largest exporters of the polyol, it also imports crystalline sorbitol, which is used in the pharmaceutical sector. Along with China and India, the markets for the polyol in Indonesia and Thailand are also witnessing significant growth.

The report gives a detailed analysis of the following key players in the Asia Pacific sorbitol market, looking into their market share, capacity, and latest developments like mergers, acquisitions, and investments, expansions of capacity, and plant turnarounds:

The EMR report provides an in-depth insight into the market, giving a value chain and SWOT analysis as well as an analysis of Porter’s Five Forces.

What was the Asia Pacific sorbitol market size in 2020?

The growing production of the polyol in the region is aiding the global market growth, which is expected to grow at a CAGR of 2.4% in the forecast period of 2022-2027.

The major drivers of the market include the higher flows of FDI into personal care and pharmaceutical firms, favourable government policies, growing economy combined with a rising middle-class population, rising urbanisation.

What are the key industry trends of the Asia Pacific sorbitol market?

The growing production of polyol and growing consumer preference for diet or sugar-free products in key areas along with increasing exports are the key industry trends propelling the market's growth.

What are the major regional markets of sorbitol, according to the EMR report?

The major regions in the industry are China, India, Japan, ASEAN, and Australia, among others.

What are the types in the market?

Liquid sorbitol, and powder sorbitol are the types of sorbitol in the market.

The major applications in the market are pharmaceutical, toothpaste, food and confectionaries, cosmetics and toiletries, and industrial surfactants, among others.

The Asia Pacific sorbitol market is being aided by the rising production of sorbitol. In 2020, nearly 1.45 million metric tons of the polyol was produced. Aided by higher flows of FDI into personal care and pharmaceutical firms, and favourable government policies, the market is expected to witness further growth in the forecast period of 2022-2027, growing at a CAGR of 2.4%.

EMR's meticulous research methodology delves deep into the market, covering the macro and micro aspects of the industry. Liquid sorbitol and powder sorbitol are the types of sorbitol in the market. The major applications in the market are pharmaceutical, toothpaste, food and confectionaries, cosmetics and toiletries, and industrial surfactants, among others. The major regional markets for sorbitol market are China, India, Japan, ASEAN, and Australia, among others. The major players in the industry are Cargill, Incorporated, Ingredion, Incorporated, Archer Daniels Midland Company, Tereos Starch & Sweeteners, Roquette Frères S.A., Dancheng Caixin Sugar Industry Co. Ltd., Others.