The global baby shampoo and conditioner market attained a value of USD 2.10 billion in 2020. The market is expected to grow further in the forecast period of 2023-2028 at a CAGR of 6.3%. In 2026, the market is expected to reach USD 3.03 billion. The industry is being driven by the growing population and rising urbanisation, globally. 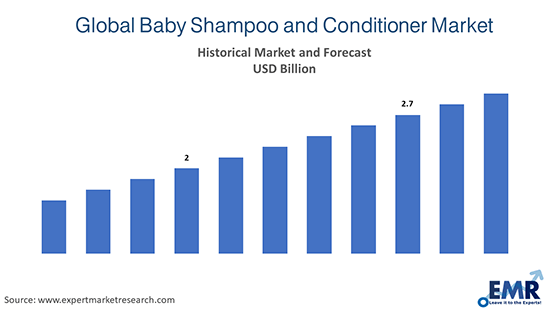 The market is currently dominated by non-medicated baby shampoos and conditioners. Non-medicated products contain different types of surfactants which condition the hair and remove excess oil from the scalp and hair. The non-medicated products account for nearly three fourth of the market. Consumers are increasingly seeking out products which are mild and are devoid of harsh chemicals. Medicated shampoos are used to treat specific conditions related to the scalp like psoriasis, seborrheic dermatitis, and fungal or bacterial infections. They contain ingredients like selenium sulphide, coal tar, or zinc pyrithione, which work to reduce the flakiness, scaling, and itchiness of the scalp.

Currently, Europe, Middle East, and Africa region is leading the market. The region is followed by the Asia Pacific region. The industry growth in these regions is aided by the burgeoning population.  Africa, particularly, has the most countries with some of world’s highest fertility rates. Niger has the highest fertility rate with 7.153 children per woman, followed by Somalia, the Democratic Republic of Congo, Mali, and Chad. In Europe, the countries with the highest birth rates are Ireland and France. China and India, meanwhile, are the most populous countries in the world. While China’s population is expected to grow at a much slower pace than before, India’s population is expected to grow at a robust pace through 2050. India’s current fertility rate stands at 2.303 children per woman. 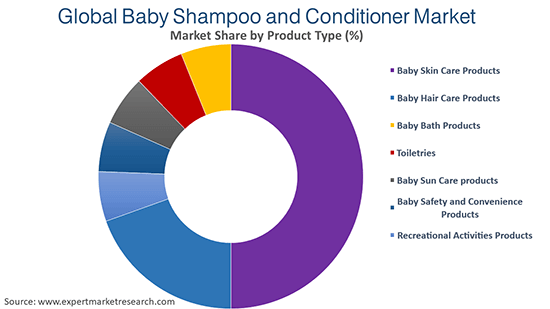 They are generally distributed through physical retail stores or through online platforms. The report gives an in-depth understanding of the regional markets like North America, Latin America, Europe, Middle East and Africa, and Asia Pacific. The report provides their historical (2018-2022) and forecasted (2023-2028) markets within these regional markets. 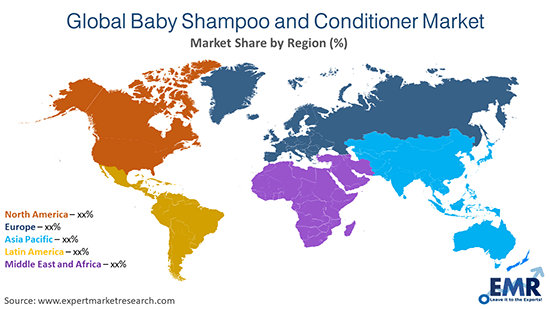 The global baby shampoo and conditioner industry will be driven by the growing population in the emerging economies. Currently, over 80% of the global population resides within developing economies. With rapidly growing urbanisation and a growing middle-class population, the market for baby shampoo and conditioner has the highest growth potential in these countries. The growth in economy is also leading to higher disposable incomes among the consumers, which is also aiding the industry growth. The decrease in infant mortality rates has further propelled the industry forward. In 2017, the infant mortality rate was 29 deaths per 1000 live births, a considerable decrease from 1990, which recorded an estimated 65 infant deaths per 1000 live births.

The market in the Middle East and Africa region has been witnessing a steady growth. This is primarily due to the high rates of fertility in African countries like Algeria and Morocco. While the Europe, Middle East and Africa region along with the Asia Pacific are the leading markets in this industry, Latin America is fast emerging as a significant market for baby shampoo and conditioner. The industry in the region is being driven by the rising disposable incomes and a growing middle-class population. While major players have invested in the Latin America markets like Argentina, Colombia, and Brazil, the falling rates of birth might restrain the growth of the industry within the region in the coming years.

Globally, there has been a rising demand from consumers for natural and sustainable products, thus, providing impetus to the industry for baby shampoo and conditioner products containing organic or natural products. The strong marketing initiatives undertaken by the key players in the industry is also aiding the growth of the industry.

The report gives a detailed analysis of the following key players in the global baby shampoo and conditioner industry, looking into their market share, capacity, and latest developments like mergers and acquisitions, expansions of capacity, and plant turnarounds:

The EMR report provides an analysis of the value chain and gives an overview of the manufacturing process and the costs involved.  It also offers a SWOT analysis along with an analysis of Porter’s Five Forces.

What was the global baby shampoo and conditioner market size in 2020?

The global baby shampoo and conditioner market reached a value of USD 2.10 billion in 2020.

The major drivers of the industry include rising disposable incomes, increasing population, and the growing population in the emerging economies.

What are the key industry trends of the global baby shampoo and conditioner market?

The rising demand from consumers for natural and sustainable products is expected to be a key trend guiding the growth of the industry.

What are the major regional markets of baby shampoo and conditioner, according to the EMR report?

What is the dominant product type in the industry?

Non-medicated is the dominant product type in the industry.

The leading distribution channels in the industry include hypermarkets and supermarkets, convenience stores, independent retailers, and online, among others.

The global baby shampoo and conditioner market attained a value of USD 2.10 billion in 2020, driven by the growth in the personal care industry. Aided by the burgeoning population, the industry is expected to witness a further growth in the forecast period of 2023-2028, growing at a CAGR of 6.3%. The industry is projected to reach USD 3.03 billion by 2026.

EMR’s meticulous research methodology delves deep into the industry, covering the macro and micro aspects of the industry. Based on product type, the global market for baby shampoo and conditioner can be segmented into medicated and non-medicated, with non-medicated accounting for the largest market share. By distribution channel, the industry is divided into hypermarkets and supermarkets, convenience stores, independent retailers, and online, among others. The major regional markets for baby shampoo and conditioner are North America, Europe, the Asia Pacific, Latin America, and the Middle East and Africa. The key players in the above industry include Johnson & Johnson Inc., Beiersdorf AG, Mothercare plc, Artsana USA, Inc., Pigeon Corporation, Others.