Based on product, the wearable segment is expected to hold a significant share in the global biosensors industry in the forecast period. This growth can be attributed to the rising incidences of diabetes and cardiovascular diseases, which require regular monitoring and instant diagnostics. These are portable and allow people to have a home-based diagnosis, which is cost-effective and reduces the time required for the diagnosis. In addition, through wearable biosensors, patients can keep track of their real-time health situation, which helps in effective treatment and early detection of diseases, which could reduce the mortality risk. 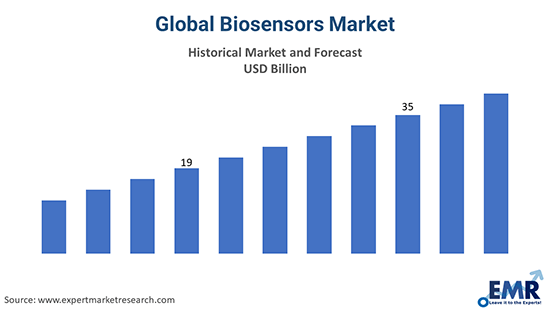 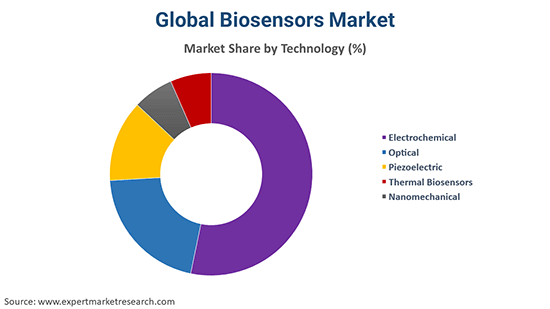 Biosensors are self-containing analytical devices that are used to detect the presence of a biological analyte. It recognises the analyte and produces a measurable signal. The device comprises a transducer and a biological component such as an enzyme, which reacts upon interaction with a biological analyte. This biological reaction is converted into an electrical signal by the transducer. Biosensors are used in multiple ways and can, therefore, be referred to as immunosensor, optrodes, glucometers, biocomputers and biochips, among others. Some commonly found biosensors include store-bought pregnancy tests and glucose detectors. 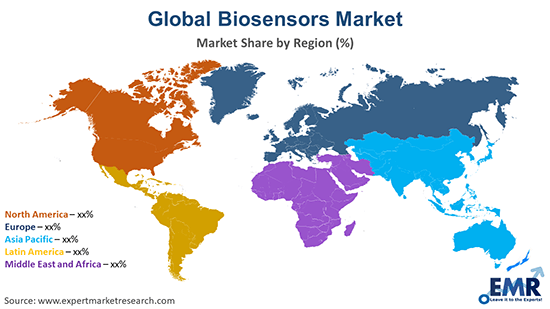 By product, the market is bifurcated into:

On the basis of technology, the industry can be categorised into:

Biosensors are increasingly being utilised in biomedicine, food safety standards, defence , security, and environmental monitoring, and with rapid advancements, the biosensor devices have become extremely helpful in the healthcare sector. Emerging trends of nanotechnology-based biosensors have increased the sensitivity limit of biosensors. Furthermore, the rising spread of chronic diseases such as cancer, diabetes, and other cardiovascular diseases has increased the demand for biosensors in the market, such as biosensors for blood glucose monitoring, pregnancy tests, and cholesterol monitoring. In addition, with the advent of coronavirus and its rapid spread, consumers are investing in oximeters, which are biosensors that monitor oxygen and blood pressure levels. These are some of the factors that are expected to impact the overall growth of the biosensors industry positively.

The report gives a detailed analysis of the following key players in the global biosensors market, covering their competitive landscape, capacity, and latest developments like mergers, acquisitions, and investments, expansions of capacity, and plant turnarounds:

What was the global biosensors market size in 2020?

In 2020, the global biosensors market attained a value of nearly USD 20.93 billion.

The major drivers of the industry, such as the increased demand for biosensors like oximeters, the growing concerns of cancer and diabetes, favourable properties such as user-friendly interface and portability, rapidly growing geriatric population, and multifaceted application possibilities of the biosensor technology, are expected to aid the market growth.

What are the key industry trends of the global biosensors market?

The key market trends guiding the growth of the industry include the rapid technological advancements and heightened investments in the R&D of biosensors technology.

What are the major regional markets of biosensors, according to the EMR report?

What are the significant product segments available in the market?

The significant product segments include wearable and non-wearable.

What are the important segments of the product, based on technology?

The major segments based on technology include electrochemical, optical, piezoelectric, thermal biosensors, and nanomechanical.

The major players in the industry are AgaMatrix Holdings LLC, Abott Laboratories Inc., Biosensors International Groups Ltd., and Medtronic Inc., among others.

The global biosensors market attained a value of USD 20.93 billion in 2020, driven by the growing incidences of cancer and diabetes. Aided by the rapid technological advancements, the market is expected to witness a further growth in the forecast period of 2023-2028, growing at a CAGR of 8.9%. The market is projected to reach USD 34.6 billion by 2026.

EMR’s meticulous research methodology delves deep into the market, covering the macro and micro aspects of the industry. By products, the market can be distributed into wearable and non-wearable. On the basis of technology, the industry can be segmented into electrochemical, optical, piezoelectric, thermal biosensors, and nanomechanical. The major regional markets for biosensors  are North America, Europe, the Asia Pacific, Latin America, and the Middle East and Africa. The key players in the above market include AgaMatrix Holdings LLC, Abott Laboratories Inc., Biosensors International Groups Ltd., and Medtronic Inc., among others.