Global Brewer’s Yeast Market is Expected to Grow at a Healthy Pace During 2021-2026, Aided by the Growth of Global Yeast Market

The global brewer’s yeast market is supported by the global yeast market, which attained a value of nearly USD 3.95 billion in 2020 and is further expected to grow in the forecast period of 2023-2028 at a CAGR of 9% to attain nearly USD 6.62 billion by 2026. 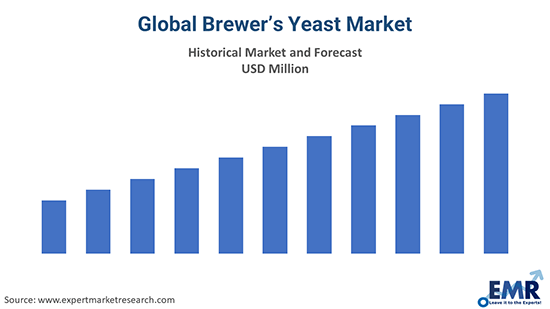 The market for brewer’s yeast is being aided by the growth of the feed supplement industry. Brewer’s yeast is extensively used as a feed supplement for pigs, ruminants, fish, and poultry. This is due to the rising awareness of animal nutrition and animal health, as well as the surging demand for the production of high-quality animal products. It also offers several health benefits to the animals, such as higher productivity and reproductive efficiency in ruminant animal species. Moreover, the soaring global population is increasing the demand for dairy, poultry, and seafood products, which is further accelerating the market growth of brewer’s yeast. Additionally, an increase in the consumption of meat and meat products owing to the nutritional benefits is augmenting the market growth.

The use of brewer’s yeast as a nutritional supplement is rising due to the growing awareness about the high level of chromium and vitamin B found in it, which assists in regulating the sugar level of the body, thereby propelling the market growth. Moreover, it is also a probiotic which promotes digestion, consequently augmenting the market growth. In addition, it is increasingly used as a supplement for minerals, particularly chromium and selenium. Brewer’s yeast is also associated with the treatment of several diseases, such as respiratory tract infections, common cold, influenza, season allergies, diarrhoea, acne, type 2 diabetes, and irritable bowel syndrome, among others, providing further impetus to the brewer’s yeast industry.

Brewer’s yeast is made from Saccharomyces cerevisiae, a unicellular fungus and is used in the production of beer and bread. Moreover, it has a bitter taste and contains small organisms called microflora that aids in maintaining the proper function of the digestive tract. 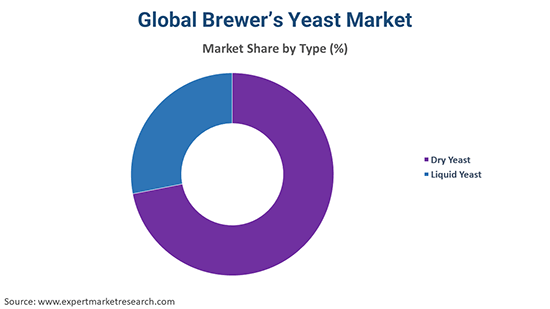 The major types of brewer’s yeast are:

Based on the applications, the industry is segmented into:

The EMR report looks into the regional markets of brewer’s yeast like North America, Europe, the Asia Pacific, Latin America, and the Middle East and Africa. 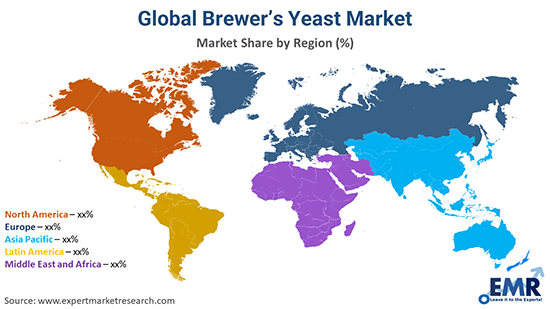 Rising awareness of proteins and nutrients consumption is leading the market growth for brewer’s yeast. Moreover, the use of brewer’s yeast as a stimulator of various immune functions such as the regeneration of cells is further boosting the market growth. Increasing research of the brewer’s yeast and the benefits and advantages associated with its consumption and usage is expected to further lubricate the market in the forecast period. It is also used as a flavouring agent in the food and beverage industry. Moreover, it is used as a good source of nitrogen containing protein in the agricultural sector, especially organic farming, which utilises natural materials for fertilisation, which is further invigorating the market growth. The surging popularity of online retail platforms and the wide availability of the brewer’s yeast are also catalysing the industry growth.

The consumer is shifting towards products containing nutritional benefits, which is driving the market for brewer’s yeast. Moreover, the increasing number of diseases such as type 2 diabetes is further propelling the market growth. As it is the by-product of brewing operations, it ensures minimum food wastage while providing maximum health benefits. The rising demand for dairy and poultry products and the use of brewer’s yeast as not only the animal feed but also as a flavouring agent is catalysing the market growth.

The report presents a detailed analysis of the following key players in the global brewer’s yeast market, looking into their capacity, market shares, and latest developments like capacity expansions, plant turnarounds, and mergers and acquisitions:

What was the global brewer’s yeast market size in 2020?

The global brewer’s yeast market is supported by global yeast market, which attained a value of nearly USD 3.95 billion in 2020.

The market is supported by global yeast market which is projected to grow at a CAGR of 9% between 2021 and 2026.

The market is supported by global yeast market which is estimated to witness a healthy growth in the forecast period of 2023-2028 to reach nearly USD 6.62 billion by 2026.

The industry is being aided by the increasing disposable incomes, changing lifestyles, growth of feed supplement industry, and rising awareness about the health benefits of the product.

What are the key industry trends of the global brewer’s yeast market?

The industry is expected to be defined by the increasing research of the brewer’s yeast and growing awareness about the immunity boosting capacity of the product over the forecast period.

What are the major regional markets of brewer’s yeast, according to the EMR report?

What are the major types of brewer’s yeast in the industry?

The major types of brewer’s yeast in the industry are dry yeast and liquid yeast.

What are the significant applications of brewer’s yeast?

The significant applications of brewer’s yeast are food supplements and feed supplements.

The major players in the industry are Titan Biotech Limited, Lallemand Inc., Leiber GmbH, and Cargill, Incorporated, among others.

The global brewer’s yeast market is supported by global yeast market, which attained a value of nearly USD 3.95 billion in 2020, driven by the growing feed supplement products used in animal feeds. Aided by the increasing use of the product in the treatment of diseases, the global yeast market is expected to witness a further growth in the forecast period of 2023-2028, growing at a CAGR of 9% and is projected to reach nearly USD 6.62 billion by 2026.

EMR’s meticulous research methodology delves deep into the market, covering the macro and micro aspects of the industry. Based on its types, the brewer’s yeast industry can be segmented into dry yeast and liquid yeast. On the basis of applications, the industry is divided into food supplements and feed supplements. The major regional markets for brewer’s yeast are North America, Europe, the Asia Pacific, Latin America, and the Middle East and Africa. The key players in the above market include Titan Biotech Limited, Lallemand Inc., Leiber GmbH, and Cargill, Incorporated, among others.