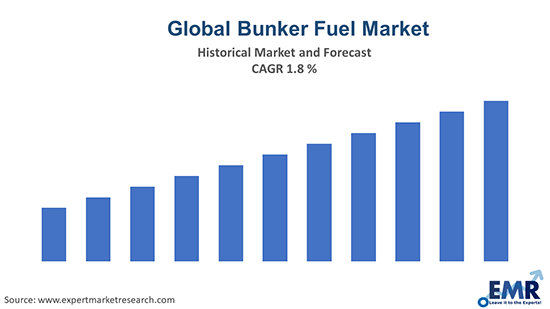 The market for bunker fuel is being driven by the rising activities associated with hydrogen resource development in offshore areas. The market is further aided by the rapidly growing bunker requirements in product tankers and crude oil. In addition, the rise in marine trade is also supporting the market growth of bunker fuel due to the increase in import-export activities. The rising oil and gas exploration activities in the emerging oil-producing regions, especially in the Asia Pacific region is expected to aid the market growth of bunker fuel over the forecast period. Moreover, the presence of oil-producing regions, which have unexplored reserves, are sufficient to meet the growing energy demand. As a result, the exploration of these untapped resources is anticipated to positively influence the demand for shipping vessels. This is expected to create lucrative growth opportunities, which will aid the market growth over the forecast period.

On the basis of type, the market is divided into:

Based on fuel grade, the industry can be segmented into:

By commercial distributors, the industry is categorised into:

On the basis of end use, the industry is divided into:

The market of bunker fuel is being driven by the rising demand for marine diesel oil. It is expected to retain its dominance over the forecast period as well. This can be attributed to the low sulphur contents in comparison to residual fuel oil, which consists of a high volume of contaminants, such as sulphur. However, factors like the emergence of LNG fuel technology as an alternative to bunker fuel and initiatives taken by the global shipping industry to reduce fuel consumption are expected to hinder the market growth of bunker fuel over the forecast period.

The report gives a detailed analysis of the following key players in the global bunker fuel market, covering their competitive landscape, capacity, and latest developments like mergers, acquisitions, and investments, expansions of capacity, and plant turnarounds:

What was the global bunker fuel market size in 2020?

In 2020, the global bunker fuel act market attained a volume of 4.3 million b/d.

The major drivers of the industry, such as the rising marine trade, growing oil and gas exploration activities, rising demand from the developing regions, and increasing demand for MDO, are expected to aid the market growth.

What are the key industry trends of the global bunker fuel market?

The key market trend guiding the growth of the bunker fuel market includes the exploration of these untapped reserves to meet the growing energy demand.

What are the major regional markets of bunker fuel, according to the EMR report?

What are the leading types of bunker fuel in the market?

The leading types of bunker fuel in the market are distillate fuel and residual fuel.

What are the significant fuel grades in the industry?

What are the major commercial distributers of bunker fuel in the market?

The major commercial distributers of bunker fuel in the market are oil majors, large independent, and small independent.

What are the leading end use sectors in the industry?

The leading end use sectors in the industry are oil majors, large independent, and small independent.

The global bunker fuel market attained a volume of 4.3 million b/d in 2020, driven by the growing marine trade. Aided by the rising oil and gas exploration activities, the market is expected to witness a further growth in the forecast period of 2023-2028, growing at a CAGR of 1.8%. The market is projected to reach 4.8 million b/d by 2026.

EMR’s meticulous research methodology delves deep into the market, covering the macro and micro aspects of the industry. Based on type, the market is bifurcated into distillate fuel and residual fuel. On the basis of fuel grade, the industry is divided into high sulphur fuel oil (HSFO), very low sulphur fuel oil (VLSFO), marine diesel oil (MDO), and liquefied natural gas (LNG), among others. By commercial distributors, the market is segmented into oil majors, large independent, and small independent. Based on end use, the industry is categorised into containers, bulk carriers, general cargo, and tankers, among others. The major regional markets for bunker fuel are North America, Europe, the Asia Pacific, Latin America, and the Middle East and Africa. The key players in the above market include ExxonMobil Corporation, Royal Dutch Shell plc., BP Plc, Total SA, Chevron Corporation, and Neste Oyj, among others.