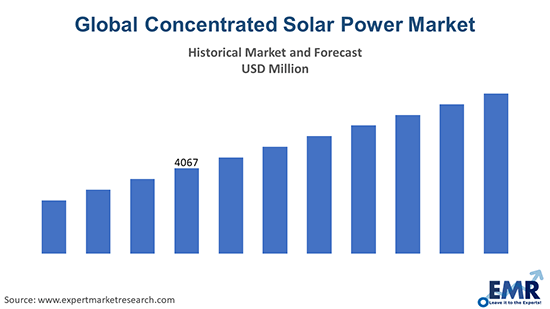 Concentrated solar energy is used in different applications such as heating fluid, primarily water or oil, which in turn generates steam or warm air. The steam generated is used to produce electricity by driving turbines linked to a generator. The increased technological advances are aiding the global concentrated solar power industry. Concentrated solar energy is a carbon-free source of electricity. It is best suited for areas with powerful radiation such as Southern Europe, Northern Africa, the Middle East, South Africa, parts of India, China, Southern America, and Australia.

Concentrated solar energy is electricity generation through mirrors to concentrate the sunrays at temperatures ranging from 400 to 1,000 ° C. Based on its technology, the market can be categorised as parabolic trough, power tower, linear Fresnel, and dish/engine system. Based on its end-use, the industry can be segmented into: 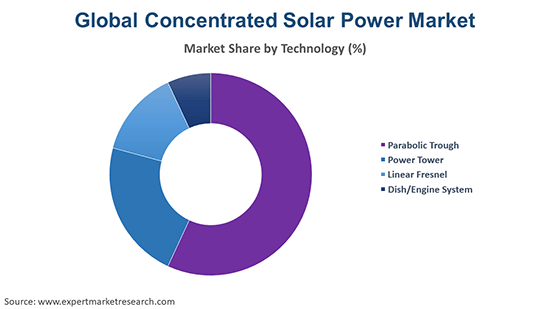 By components, the industry can be divided into solar field, power block, and thermal energy storage system.

The EMR report looks into the regional concentrated solar power markets like North America, Latin America, Europe, the Middle East and Africa, and the Asia Pacific. 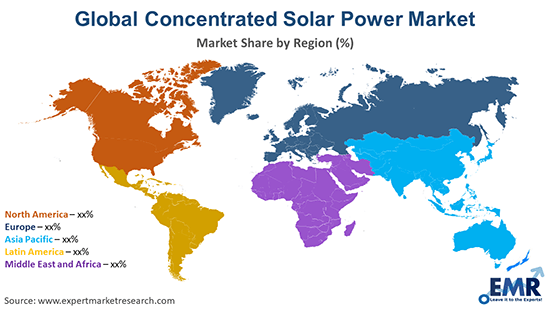 Increased government support for the implementation of renewable technologies combined with increased energy demand and power supply capacity without carbon dioxide gas emissions are driving the growth of the concentrated solar power industry. In addition, the rise in carbon-based environmental issues has led to an increased focus on reducing air pollution and an increase in the awareness regarding global warming. It is also anticipated that this factor will boost the industry growth during the forecast period. However, heavy costs incurred during the production of concentrated solar energy may hamper the market growth in the future.

The report presents a detailed analysis of the following key players in the global concentrated solar power market, looking into their capacity, competitive landscape, and latest developments like capacity expansions, plant turnarounds, and mergers and acquisitions:

The EMR report gives an in-depth insight into the industry by providing a SWOT analysis as well as an analysis of Porter’s five forces.

What was the global concentrated solar power market size in 2020?

The major drivers of the industry, such as the increasing environmental concern, adoption of renewable energy sources, favourable government policies and increased expenditure to promote green energy technologies, and the rising global demand for energy, are expected to aid the market growth.

What are the key industry trends of the global concentrated solar power market?

The key market trends guiding the growth of the industry include the growing research and development activities and the rapid technological advancements.

What are the major regional markets of concentrated solar power, according to the EMR report?

What are the leading technologies of concentrated solar power in the industry?

What are the significant end use segments of concentrated solar power in the market?

The significant end use segments of concentrated solar power in the market include utilities and enhanced oil recovery, among others.

What are the major components of the product in the industry?

The major components of the product in the industry are solar field, power block, and thermal energy storage system.

The global concentrated solar power market attained a value of USD 4120.20 million in 2020, driven by the rising awareness regarding various environment issues including climate change. Aided by the technological advancements, the market is expected to witness a further growth in the forecast period of 2023-2028, growing at a CAGR of 9%.

EMR’s meticulous research methodology delves deep into the market, covering the macro and micro aspects of the industry. Based on its technology, the concentrated solar power industry can be segmented into parabolic trough, power tower, linear Fresnel, and dish/engine system. On the basis of end uses, the industry is categorised into utilities and enhanced oil recovery segments, among others. By components, the industry is divided into solar field, power block, and thermal energy storage system. The major regional markets for concentrated solar power are North America, Europe, the Asia Pacific, Latin America, and the Middle East and Africa. The key players in the above market include Abengoa Solar, S.A., Brightsource Energy, Inc., ACWA Power Reinsurance Co Limited., Esolar, Inc., Solarreserve, LLC, Aalborg CSP A/S., TSK Flagsol Engineering GmbH, and others.