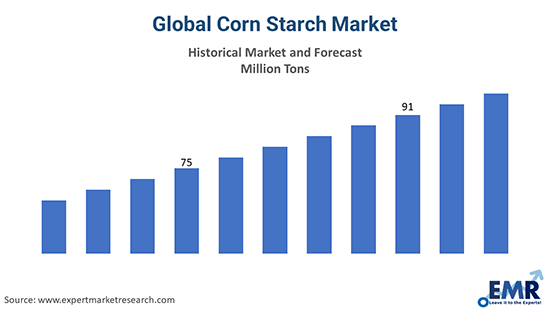 The US is a largest producer in the global corn starch market. The European Union is a significant global producer of corn, accounting for 6% of its total output and nearly 13% of its output in the EU is utilised in the production of starches along with glucose and other sweeteners. In 2017, the total starch production in the EU witnessed an increase of 1% as compared to the previous year, reaching over 9.4 million metric tons. Cooperatives and farmers in the region produced almost 24 million tonnes of agricultural raw materials for starch production. China is one of the major corn starch consuming nations, globally, having a significant share in the end-use sectors of processed corn starch like polyols and High Fructose Corn Syrup (HFCS).

The prices of corn starch are highly dependent upon its feedstock. Corn or maize accounts for nearly three-fourths of the total starch production, globally. The global corn output was nearly 1044.6 million tons in 2017. The US is a major corn producer, accounting for more than 35% of the global output. The country witnessed a record yield in 2017 due to favourable weather conditions conducive for the crop growth. It is also a leading exporter of corn. Globally, the corn consumption has witnessed a healthy growth over the past few years driven by the rising demand from major end-use sectors like ethanol, animal feed, and other industrial application. The production of sorbitol is another significant end-use sector of corn. The growth in demand is being driven by the major corn consuming nations like China and the US.

Corn starch, also known as maize starch, is a starch obtained from the grains of corn. It is derived from the corn kernel endosperm. It is commonly used in the food sector as a thickening agent for soups and sauces, and also finds extensive use in the production of corn syrup and sweeteners. 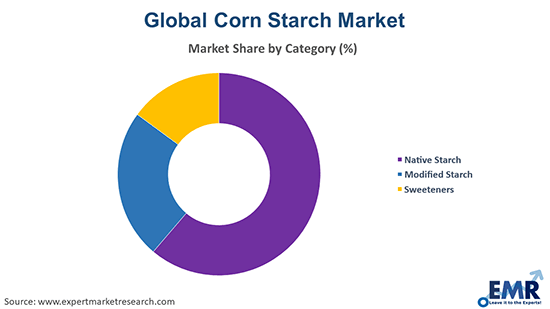 Based on category, the industry is segmented into: 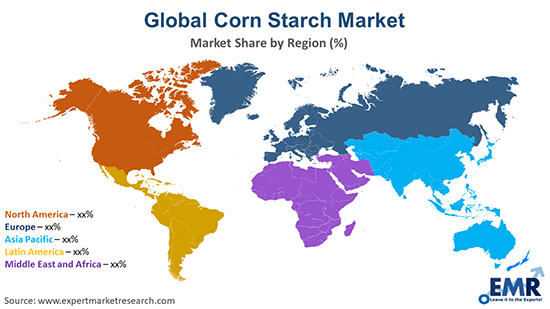 The global corn starch market is being driven by the high rate of corn production, globally. The industry is being aided by its growing application in the food industry. It is widely used as a thickener in food items like gravies, soups, and sauces. It also finds applications as a coating in deep-fried food to give them a crispy texture, and in baked goods to provide them with moisture and fullness. Being gluten-free, it is unaffected by the shift towards gluten-free products. The steady growth of the bakery industry is also aiding the growth of the product in the food sector. In 2018, the global bakery industry attained a value of USD 482 billion. The US, which is a leading corn starch market, is also a significant bakery market thus aiding the industry. Sweeteners represent one of the major categories of corn starch, which is expected to see a healthy growth in the coming years.

This industry is also being driven by its rising application in the non-food sectors like the textile and paper industries. The increase in the consumption of paper in countries like China, the US, and Japan, is further propelling the industry forward. It is also widely used in the manufacture of latex materials like gloves and diaphragms. The rising demand for the product in the biofuels sectors is projected to drive the market growth in the coming few years. Growing population and rapid urbanisation are also providing impetus to the global industry growth.

The report gives a detailed analysis of the following key players in the global corn starch market, covering their competitive landscape, capacity, and latest developments like mergers, acquisitions, and investments, expansions of capacity, and plant turnarounds:

What was the global corn starch market size in 2022?

In 2022, the global corn starch market attained a volume of nearly 84.86 million tons.

The major drivers of the market include growing production of corn, increasing demand in the food industry, growing consumption of processed food products, rising demand in textiles and paper industry, rising disposable incomes, and rapid urbanisation, are expected to aid the market growth.

What are the key trends in the corn starch market?

The increasing demand for corn starch to prepare biofuels is the key trend guiding the growth of the corn starch market.

What are the major regional markets of corn starch, according to the EMR report?

The major regional markets are North America, Europe, the Asia Pacific, Latin America and the Middle East and Africa.

What are the major categories of corn starch in the market?

Native starch, modified starch, and sweeteners are the major categories of corn starch in the market.

What are the significant applications of corn starch?

The significant applications of the product are food and beverages, animal feed, pharmaceuticals and chemicals, textile, and paper and corrugates.

The global corn starch market attained a volume of 84.86 million tons in 2022, driven by the increasing corn production and rising demand in food industry for thickening applications. Aided by the growing demand for biofuels, the market is expected to witness a further growth in the forecast period of 2023-2028, growing at a CAGR of 2.7%. The corn starch market is projected to reach 94.90 million tons by 2028.

EMR’s meticulous research methodology delves deep into the market, covering the macro and micro aspects of the industry. Based on category, the industry can be segmented into native starch, modified starch, and sweeteners. On the basis of application, the industry can be segmented into food and beverages, animal feed, pharmaceuticals and chemicals, textiles, paper and corrugates, and others. The major regional markets for the product are North America, Europe, the Asia Pacific, Latin America, and the Middle East and Africa. The key players in the above market include Cargill, Incorporated, Archer Daniels Midland Company, Ingredion Incorporated, Tate & Lyle Plc, Grain Processing Corporation, Roquette Freres, and Tereos SA, among others.