Global Crude Oil Market to be Aided by the Expected Growth in the Global Fuel Oil Market at a CAGR of 2% over the Forecast Period of 2021-2026. 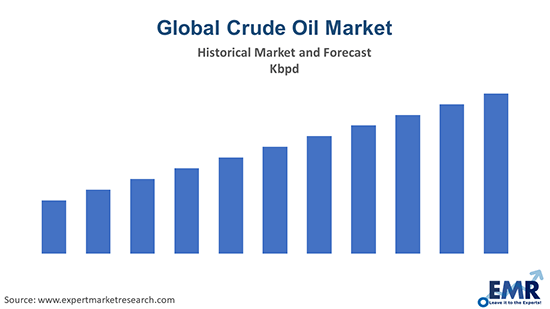 In 2018, there was a slight increase in the proven crude oil reserves globally as compared to 2016. The global reserve was estimated to be around 1729 thousand million barrels in 2018. Non-OECD countries represented the majority of these reserves, accounting for 85.7% of these reserves. North America and the Middle East and Africa had the largest crude oil consumption in 2018, followed by Australia, Japan, and the Netherlands. North America is one of the largest oil-consuming regions, driven by large shale oil deposits and the technological capability to exploit such reserves. Within the region, the United States extensively imports crude oil from Canada and Mexico to be further refined in the country’s refineries. In the Asia Pacific region, China, India, and Korea are the major demand centres for crude oil, aided by the increase in commercial vehicles.

The Middle East is the largest oil-producing region in the world. The region also has the geographical advantage of being close and having easy access to the Asia Pacific and Europe, which happen to be the highest importing markets for crude oil. In 2018, the Middle East exported nearly 24640 million tons of crude oil. In the Asia Pacific and the Middle East, in spite of having a significant presence of private suppliers, the state-owned National Oil Companies (NOCs) is dominating the fuel market. In Africa and Latin America, the industry is dominated by the NOCs, and there is a low presence of private suppliers in the market. In North America and Europe, the oil suppliers are highly matured, giving intensive competition to the top global suppliers such as ExxonMobil, BP, and Shell.

Crude oil is an unrefined petroleum product, which occurs naturally and has to be further refined to produce diesel, gasoline, and other petrochemicals. It is a limited non-renewable resource, i.e., it cannot be replaced at the rate of its consumption.

The report covers the macro and micro aspects of the industry, like trade and price analysis. It also covers the regional markets of the product like North America, Europe, the Asia Pacific, Latin America, and the Middle East and Africa. 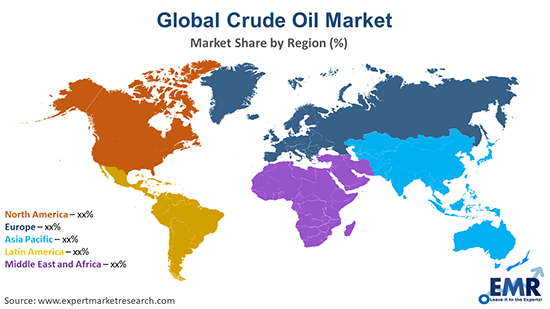 In North America, the crude oil market is expected to be driven by the shale oil deposits and reserves, supported the region’s access to superior technologies, which help in exploiting these reserves. An increase in the export opportunities for refinery products like diesel and gasoline are also expected to aid the market growth. In Europe, which is the third-largest oil-consuming region, the market is propelled by the rise in the fuel demand for vehicles, as a result of increasing the imports in Europe. The Asia Pacific is the largest consuming region of crude oil. There is high demand from emerging economies such as China, India, and South East Asian countries owing to the anticipated rise in the number of commercial vehicles. The market in these emerging economies is also supported by the burgeoning population and rapid urbanisation.

The increase in economic activities is strengthening the market in Africa, along with the discovery of new shale oil reserves in the region. The Middle East is the largest oil-producing region in the world. The market in the region is driven by the high domestic consumption and the import demand from regions like the Asia Pacific and Europe.  The market in Latin America is aided by the large shale oil reserves in Argentina, which are the second largest after the North American reserves. The industry in Latin America is expected to be driven by the rise in upstream demand. The recovery in the GDP of major oil-consuming regions is also supporting the growth of the crude oil market. However, in the forecast period, the growth of the industry might be adversely affected by the rising shift towards alternative energy sources by regions like the European Union.

June 2020: BP (NYSE: BP) has reached an agreement with Dragon Oil, a wholly-owned subsidiary of the Emirates National Oil Company (ENOC) based in Dubai, to sell its interest in the Gulf of Suez Petroleum Company (GUPCO) in Egypt.

The report gives a detailed analysis of the following key players in the global crude oil market, covering their competitive landscape, capacity, and latest developments like mergers, acquisitions, and investments, expansions of capacity, and plant turnarounds:

What was the global crude oil market size in 2020?

The major drivers of the market include the shale oil deposits and reserves, rise in the fuel demand for vehicles, high demand from emerging economies, burgeoning population, rapid urbanisation, increase in economic activities, rise in upstream demand, high domestic consumption and the import demand.

What are the key industry trends of the global crude oil market?

The rising demand for fuel oil and an increase in the export opportunities for refinery products like diesel and gasoline are the key industry trends propelling the market's growth.

What are the major regional markets of crude oil, according to the EMR report?

The major regions in the industry are North America, Latin America, Middle East and Africa, Europe, and Asia Pacific.

The global crude oil market attained a volume of nearly 100149.7 Kbpd in 2020, driven by the rising demand for fuel oil. Aided by rise in the fuel demand for vehicles and increase in the export opportunities for refinery products, the market is expected to witness further growth in the forecast period of 2021-2026, growing at a CAGR of 2%.

The global crude oil improvers market is predicted to grow at a CAGR rate of 4.90% in the forecast period of 2022-2027. Where North America has a strong base in the market, the Asia Pacific shows rapi...
Read More

The global gasoline market was driven by the rise in the number of automobiles in the historical period. Aided by the rising population and rapid industrialisation, the market is expected to grow at a...
Read More

The global charcoal briquette market is driven by the surging demand for energy and technological advancement. Aided by growing environmental concerns among consumers, the market is expected to witnes...
Read More

The global aviation gasoline (Avgas) market attained a value of USD 1.8 billion in 2021, driven by the increased need for small piston aircraft for sporting activities. Aided by the growing number of ...
Read More

The global carbon capture and sequestration market attained a value of nearly USD 6.3 billion in 2021, driven by the emerging need to reduce carbon dioxide concentrations in the atmosphere. Aided by t...
Read More