Global Cyclamate Market to Grow at a CAGR of 2% During 2021-2026, Driven by the Increased Demand from the Food and Beverage Industry.

The global cyclamate market is expected to grow in the forecast period of 2023-2028 at a CAGR of 2%.

The Asia Pacific to be a Significant Market for Cyclamate

The Asia Pacific has emerged as a major regional market for the global cyclamate industry in the historical period and is expected to continue its growth over the forecast period as well. This can be due to the growing food and beverage industry in countries such as India and China. Europe is also expected to witness a steady growth over the next few years owing to the robust demand for cyclamate in the regional food and beverage industry. The cyclamate industry in North America, however, is predicted to have a sluggish growth rate due to the restriction on the usage of cyclamate by the FDA. Cyclamate is under the process of re-approval in North America. 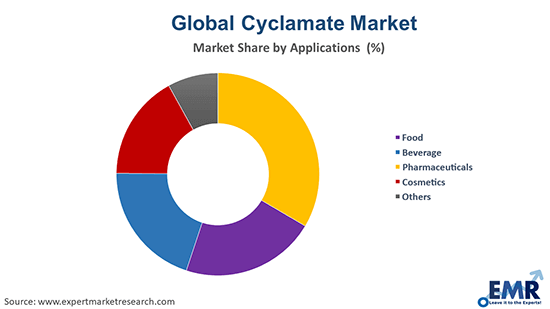 Cyclamate is an artificially synthesized salt of sodium or calcium used, especially as a sweetener. It is about 30-50 times sweeter than sucrose (table sugar). Cyclamic acid is a white, odourless crystalline powder that is soluble in water and ethanol, whereas calcium cyclamate and sodium cyclamate are freely soluble in water but partially soluble in benzene and diethyl ether. Cyclamate is produced from cyclohexylamine. It can readily dissolve in both hot and cold liquids.

The major types of cyclamate are:

The EMR report looks into the regional markets of cyclamate like North America, Europe, the Asia Pacific, Latin America, and the Middle East and Africa. 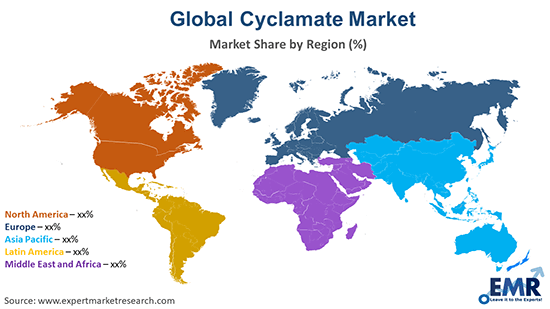 Cyclamate is primarily consumed in the food and beverage industry. Strong demand for food and beverage products across the globe is expected to fuel the global cyclamate industry growth. Sodium and calcium cyclamate are used as non-sweeteners in energy drinks. Cyclamate is used in a wide range of products like cereals, biscuits, chocolates, and soft drinks. The growing pharmaceutical industry is predicted to bolster the cyclamate industry growth owing to its consumption in the production of various drugs. Moreover, cyclamate is comparatively cheaper to most of the sweeteners available in the market, making cyclamate a cost-efficient product in the sweeteners market. These factors are expected to have a favourable effect on the growth of the cyclamate industry over the forecast period.

The report presents a detailed analysis of the following key players in the global cyclamate market, looking into their capacity, market shares, and latest developments like capacity expansions, plant turnarounds, and mergers and acquisitions:

What is the growth rate of the global cyclamate market?

The global cyclamate market is projected to grow at a CAGR of 2% in the forecast period of 2023-2028.

The major drivers of the industry, such as rising disposable incomes, growing demand from the food and beverage industry, growing population, and rising consumption in pharmaceuticals, are expected to aid the market growth.

What are the key industry trends of the global cyclamate market?

The key trend in the market is the increasing consumption of the product in food and beverages.

What are the major regional markets of cyclamate, according to the EMR report?

The major regional markets of cyclamate are North America, Europe, the Asia Pacific, Latin America, and the Middle East and Africa.

What are the leading types of cyclamate in the industry?

The leading types of cyclamate in the industry are cyclamic acid, sodium cyclamate, and calcium cyclamate.

The major application segments in the industry are food, beverage, pharmaceutical, and cosmetics, among others.

The global cyclamate market is being driven by strong demand from the food and beverage industry. Aided by the adoption in pharmaceuticals, the market is expected to witness further growth in the forecast period of 2023-2028, growing at a CAGR of 2%.

EMR’s meticulous research methodology delves deep into the market, covering the macro and micro aspects of the industry. Based on its types, the market can be segmented into cyclamic acid, sodium cyclamate, and calcium cyclamate. Based on the application, the market can be categorised into food, beverage, pharmaceutical, cosmetics, and others. The major regional markets for cyclamate are North America, Europe, the Asia Pacific, Latin America, and the Middle East and Africa. The key players in the above market include Tongaat Hulett, Productos Aditivos, S.A., Jinyao Ruida (Xuchang)Biology Technology Co., Ltd., Foodchem International Corporation, Golden Time Chemical (Jiangsu) Co., Ltd., Hugestone Enterprise Co., Ltd., and PT. Batang Alum Industrie, among others.