The electric insulator market is being driven by the refurbishment of ageing grid technology. Owing to the growing integration of renewables and distributed technologies onto the grid, industries are upgrading their existing infrastructure. The ceramic/porcelain material segment holds a significant share in the global electrical insulators market. The growth of the segment is the result of the increased preference of these insulators owing to its physical strength. 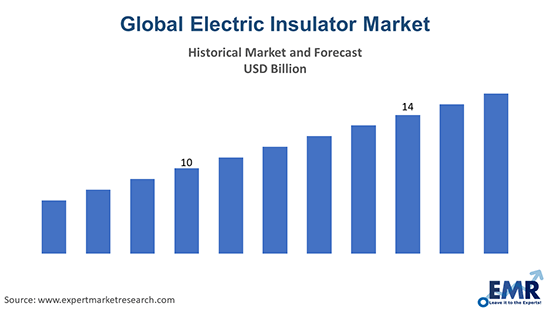 The Asia Pacific is expected to account for a significant market share in the forecast period. Within the Asia Pacific, the rapid industrialisation and urbanisation and the growing need to enhance power generation capacity has led to the rapid expansion of transmission and distribution (T&D) infrastructure in countries such as China, India, and Japan, thus, aiding the industry growth in the region. Further, African nations have announced that they will achieve universal electricity access by 2026, further focusing on the adoption of clean and renewable energy solutions, which will generate increased demand for new off-grid connections, which in turn, will drive the growth of electric insulator industry over the forecast period.

An electric insulator is a material with weak electrical conductivity due to lack of free-flowing electrical charges. When an electromotive force (EMF) source is applied, it displays characteristics such as high resistivity and helps to regulate the electric current flow efficiently. Besides this, electric insulators prevent the current from flowing in the direction where it is not needed. Thus, electric insulators are commonly utilised in coating wires, in electricity distribution networks, and as dielectrics in capacitors. 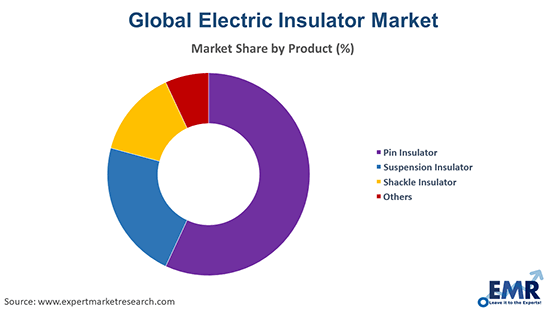 On the basis of product, the electric insulator industry is divided into:

The various materials available in the industry include:

Based on voltage, the industry has been divided into:

On the basis of category, the industry has been bifurcated into:

Based on installation, the industry is categorised as:

By rating, the market is segmented into:

On the basis of applications, the industry is divided into:

The various end-use sectors for electric insulators include: 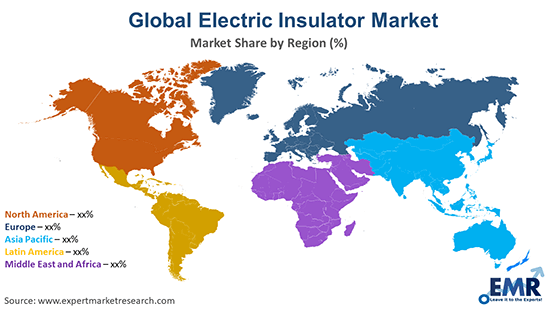 The global electric insulator market is being supported by the growing demand for energy and the refurbishment of ageing grid technology. Many developed economies are currently investing in the renovation of aging grid infrastructure, further developing sustainable electrical networks in order to deliver electricity generated from renewable sources. The increased demand to adopt renewable energy sources owing to the rising environmental concern is driving this trend, which, in turn, will propel the demand for the electric insulator.

One of the main functions of insulators is to provide protection against the harmful effects of electricity, making them useful in networks for electricity transmission and distribution (T&D). Furthermore, because of properties such as low thermal expansion and high dielectric strength, insulators find extensive applications in various industries as a safety measure.

Moreover, rapid urbanisation and growing industrialisation in the developing nations is leading to increased demand for energy, thus, leading to the expansion of transmission and distribution (T&D) infrastructure. The government in such regions are also encouraging the adoption of renewable energy sources by providing subsidies and other benefits to the consumers and electric insulator manufacturers. This is expected to further aid the global electric insulator market growth over the forecast period.

The report gives a detailed analysis of the following key players in the global electric insulator market, covering their competitive landscape, capacity, and latest developments like mergers, acquisitions, and investments, expansions of capacity, and plant turnarounds:

The global electric insulator market reached a value of USD 10.8 billion in 2020.

The major drivers of the industry include rising disposable incomes, increasing population, and the growing demand for energy and refurbishment of ageing grid technology.

The increasing demand for adopting renewable energy sources owing to the rising environmental concern is expected to be a key trend guiding the growth of the industry.

North America, Europe, the Asia Pacific, Latin America, and the Middle East and Africa are the leading regions in the market, with the Asia Pacific accounting for a significant market share.

What is the leading material of electric insulator in the industry?

Ceramic/porcelain is the leading material type in the industry.

What are the various voltage levels of the product?

The voltage levels can be categorised into low, medium, and high.

What are the major categories in the industry?

The major categories can be divided into bushings and other insulators.

What are the major installation sectors for the industry?

The installation sectors can be segmented into distribution networks, transmission lines, substations, and railways, among others.

What are the leading rating levels in the industry?

What are the most significant application sectors for the product?

The most significant application sectors for the product are transformers, cables, switchgears, busbar, and surge protection devices, among others.

What are the dominant end-use sectors for the product?

It finds wide end-uses in utilities and industries, among others.

The global electric insulator market attained a value of USD 10.8 billion in 2020 driven by the rapid urbanisation and growing industrialisation. Aided by the growing demand for energy and refurbishment of ageing grid technology, the industry is expected to witness a further growth in the forecast period of 2022-2027, growing at a CAGR of 5.7%. The industry is projected to reach USD 14.5 billion by 2026.

EMR’s meticulous research methodology delves deep into the industry, covering the macro and micro aspects of the industry. Based on product types, the global electric insulator market can be segmented into pin, suspension, and shackle insulators, among others. By material, the ceramic/porcelain segment leads the industry. Based on voltage, the industry is divided into low, medium, and high voltage. Bushings and other insulators are the major categories in the industry. Based on installation, the market can be segmented into distribution networks, transmission lines, substations, and railways, among others. By rating, the industry is divided into <11 kV, 11 kV, 22 kV, 33 kV, 72.5 kV, 145 kV, and others. On the basis of application, the industry can be divided into transformers, cables, switchgears, busbar, and surge protection devices, among others. The major regional markets for electric insulator are North America, Europe, the Asia Pacific, Latin America, and the Middle East and Africa, with the Asia Pacific accounting for the largest share of the market. The key players in the above industry include NGK Insulators, Ltd., Aditya Birla Insulators, Siemens Gas and Power GmbH & Co. KG, General Electric, and Hubbell Incorporated, among others.

The global string inverter market attained a value of above USD 3.4 billion in 2021, driven by the growing applications in the residential, commercial, and industrial sectors. Aided by technological a...
Read More

The global power distribution unit (PDU) market is being driven by the rising demand for power, rapid urbanisation, and technological advancements in industries including healthcare and transportation...
Read More

The global generators market attained a value of USD 60.5 billion in 2021, driven by the rising applications of the product in the automotive, aerospace, and other industries. Aided by the rising inve...
Read More

The India AC drives market is being driven by the increased industrialisation and urbanisation and the rising energy demands. Aided by the growing focus on energy conservation solutions, the market is...
Read More

The global hydropower generation market attained a value of more than USD 210.7 billion in 2021, driven by the rising demand for cleaner energy sources. Aided by the efficiency of hydropower plants, t...
Read More