These types of equipment are specially designed for minimally invasive procedures. Varicose vein disease symptoms include large, swollen veins that frequently appear on the legs and feet. It occurs when arteries are not working efficiently, leading to blood not circulating easily. Varicose veins can break down or grow into varicose ulcers on the skin in severe cases. 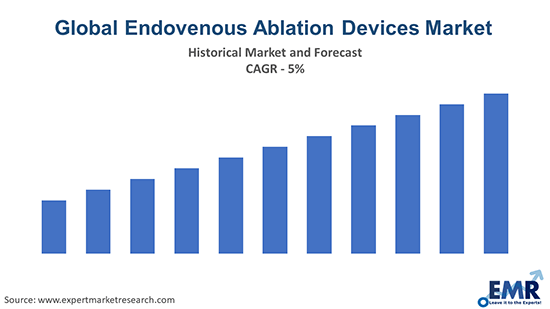 Endovenous ablation is an image-guided procedure, which is minimally invasive. It uses radiofrequency to cauterize (burn) and close anomalous veins, which lead to varicose veins. 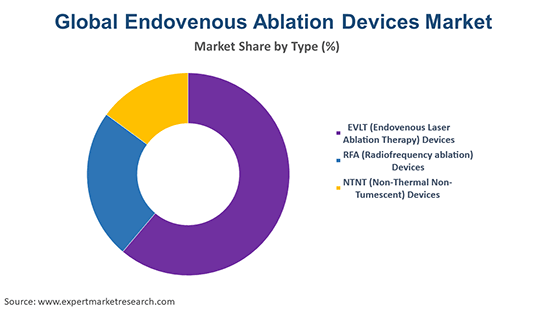 The endovenous ablation devices market can be divided based on segments like type and application. The industry can be broadly categorised based on types into:

Based on application segments, the industry can be divided into:

The EMR report looks into the regional endovenous ablation devices markets like North America, Latin America, Europe, the Middle East and Africa, and the Asia Pacific. 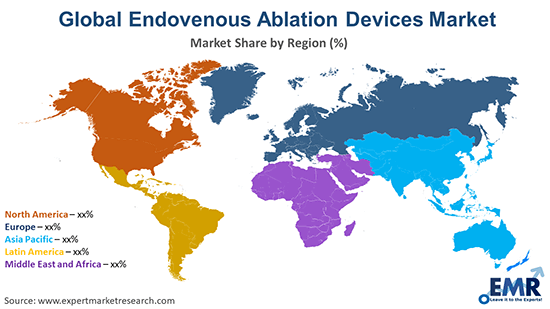 The report presents a detailed analysis of the following key players in the global endovenous ablation devices market, looking into their capacity, market shares, and latest developments like capacity expansions, plant turnarounds, and mergers and acquisitions:

What is the growth rate of the global endovenous ablation devices market?

The global endovenous ablation devices market is projected to grow at a CAGR of 5% between 2022 and 2027.

What are the key industry trends of the global endovenous ablation devices market?

The growing prevalence of chronic venous insufficiency (CVI) and the introduction of endovenous ablation devices as an option to endovenous laser ablation and radiofrequency ablation (RFA) are the key trends driving the market growth.

What are the major regional markets of the global endovenous ablation devices, according to the EMR report?

The major regions in the industry are North America, Europe, Asia Pacific, Latin America, and the Middle East and Africa.

What are the types of devices in the industry?

The major applications include commercial and research among others.

The major players in the industry are AngioDynamics, Inc., Medtronic plc , Sciton Inc., Teleflex Incorporated , and Venclose Inc., among others.

The global endovenous ablation devices market has been driven by the growing prevalence of chronic venous insufficiency (CVI) in the historical period. Aided by the growing prevalence of varicose veins and increasing geriatric population, the market is expected to witness a further growth in the forecast period of 2022-2027, growing at a CAGR of 5%.

EMR’s meticulous research methodology delves deep into the market, covering the macro and micro aspects of the industry. Based on its types, the global endovenous ablation devices industry can be segmented into EVLT (endovenous laser ablation therapy) devices, RFA (radiofrequency ablation) devices, and NTNT (non-thermal non-tumescent) devices. By application, the market is divided into commercial and research, among others . The major regional markets for the global endovenous ablation devices are North America, Europe, Asia Pacific, Latin America, and the Middle East and Africa. The key players in the above market include AngioDynamics, Inc. , Medtronic plc , Sciton Inc., Teleflex Incorporated , and Venclose Inc., among others.

The rising cases of chronic diseases drove the global healthcare regulatory affairs outsourcing market in the historical period. Aided by the increase in demand for drugs and medical devices at a lowe...
Read More

The global energy recovery ventilator market was driven by the increased emphasis on air quality in the historical period. Aided by the growing number of green buildings and rising awareness amongst p...
Read More

The global cerebral somatic oximeters market was driven by the increasing popularity of cerebral devices in the historical period. Aided by the rising demand for superior quality healthcare treatment ...
Read More