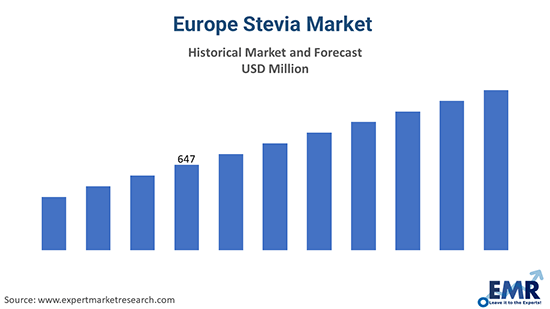 The Europe stevia market is being aided by the growing global industry. The global market is expected to grow at a CAGR of 8.4% to reach a value of USD 844.20 million.

Europe is a leading regional market for stevia, globally after the Asia Pacific. The continent accounts for over a fifth of the global industry in terms of consumption and is being driven by the accelerating year-on-year use of stevia in the region. Since it accounts for only a small percentage of the global output of the natural sweetener, it imports stevia leaves to meet the rising domestic demand. The imported leaves are then processed into pure stevia sweeteners. The growing consumer interest and increase in investments and innovations by the companies involved are further aiding the Europe stevia market. Europe, along with the Asia Pacific was the leading region for the launches of foods and beverages containing the natural sweetener as an ingredient. The two regions were followed by Latin America and North America as major markets for stevia as well as in the number of foods and beverages product launches, which were comprised of the natural sweetener.

Stevia is a zero-calorie natural sweetener produced from the leaves of Stevia rebaudiana, native to Paraguay and Brazil. It is used as a sugar-substitute, deriving its sweetness from its active compound, steviol glycosides, which are 30-150 times sweeter than sugar. According to the extract types, it is available as leaves, liquid, or powder. 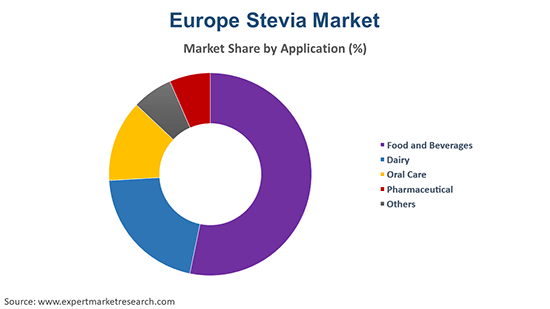 It finds extensive application in the following sectors:

The EMR report also looks in-depth into the regional markets in Europe like Germany, France, the United Kingdom, and Spain, among others. 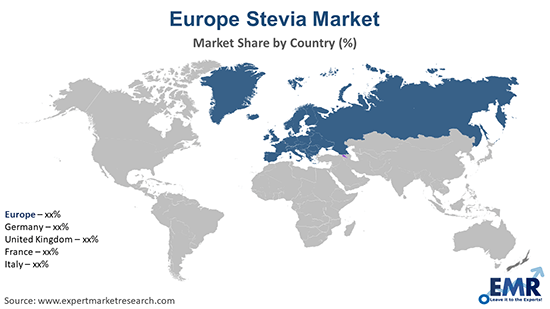 The Europe stevia market is being driven by its thriving food and beverage industry along with a rising awareness about diseases related to sugar consumption. The increasing rates of obesity, leading to people seeking out healthier alternatives to sugar, is also aiding the Europe stevia market. The industry is also finding further impetus for its growth in the increasing consumer interest in innovative and healthy products. Being a natural sweetener, stevia is witnessing a greater adoption of its use as the consumers are seeking out natural or organic products and moving away from artificial sweeteners. The rising innovations in ready-made meals, soft drinks, and dairy products, with major players investing further on R&D undertakings, are acting as a catalyst for the Europe stevia market. The natural sweetener is finding expanding use in RTD tea, fruit drinks, and carbonated soft drinks as consumers are looking for low or no sugar, natural alternatives.

The Europe stevia market is also being driven by favourable government policies and regulatory clearances. European countries like Finland, Hungary, France, Norway, UK, and Ireland have implemented taxes on sugary beverages. France has also implemented taxes on drinks containing artificial sweeteners, thus, pushing the Europe stevia market further forward. Romania, too, is looking to introduce taxes for sugary foods and beverages. In the EU, steviol glycosides are authorised to be used as food additives under the European Union under Annex II of Regulation (EC) 1333/2008. The regulation controls the amount of stevia that can be added to food and beverage products like tea, instant coffee and cappuccino, fruit drinks, flavoured beverages, beer, and other alcoholic drinks.

The report provides a detailed insight into the following key players in the Europe stevia market, covering their competitive landscape, capacity, and latest developments like mergers and acquisitions, expansions of capacity, and plant turnarounds:

The EMR report gives an in-depth look into the Europe stevia market by providing an assessment based on the Porter’s Five Forces model along with a SWOT analysis. It also looks into the other global markets like North America, Asia Pacific, Latin America, and the Middle East and Africa.

What was the Europe stevia market size in 2021?

The Europe stevia market attained a value of nearly USD 95.23 million in 2021.

The major drivers of the industry include the rising disposable incomes, increasing population, rising demand for natural sweeteners, increased applications in the sports and energy sector, and the rising food and beverage industry.

The rising consumer interest and increase in investments and innovations by the companies involved in the industry are expected to be the key trends guiding the growth of the industry.

Germany, France, the United Kingdom, and Italy, among others, are the leading regions in the market.

What are the leading extract types of stevia in the industry?

The leading extract types of stevia in the industry include leaf, liquid, and powder.

What are the major application sectors of the product?

The major application sectors of the product include food and beverages, dairy, oral care, and pharmaceutical, among others.

EMR’s meticulous research methodology delves deep into the industry, covering the macro and micro aspects of the industry. Based on extract types, the Europe market for stevia can be segmented into leaf, liquid, and powder. On the basis of application, the industry can be divided into food and beverages, dairy, oral care, and pharmaceutical, among others. The major regional markets for stevia in Europe are Germany, the United Kingdom, France, and Italy, among others. The key players in the above industry include HSWT France SAS, Cargill, Incorporated,  Tate & Lyle PLC, Archer Daniels Midland Company, Ingredion Incorporated, Stévial, Others.