The global field programmable gate array market is expected to grow at a CAGR of 7.7% in the forecast period of 2023-2028, in terms of value. 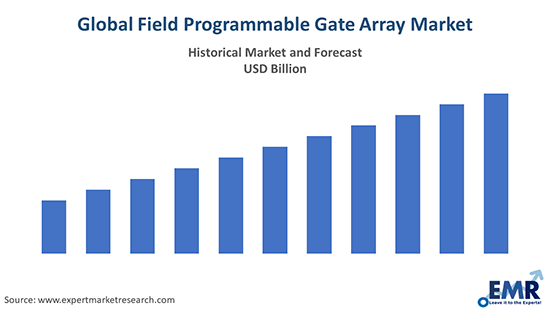 By architecture, the market is segmented into SRAM, anti-fuse, and flash, among others. In the past years, the static random-access memory (SRAM) segment produced the most revenue, owing to its greater versatility, re-programmability, high integration, and high performance for a variety of applications. The widespread use of SRAM-based field programmable gate arrays in military and aerospace, telecommunications and wireless communication networks, and consumer products has been propelling the segment forward. However, anti-fuse FPGAs are more reliable than SRAM-based arrays, particularly in radiation-prone environments. Because of their quicker boot time and better reliability, the anti-fuse segment is projected to expand significantly over the forecast era.

As SRAM-based field programmable gate arrays are extremely volatile and require a dedicated power source to store data, the industry leaders are constantly working to produce innovative SRAM memory technology to simplify FPGA-based products and address this challenge. Meanwhile, flash-based FPGAs are expected to be the most widely deployed architecture-type over the projected timeframe.

The Asia Pacific is projected to be one of the most attractive regions for the players operating in the field programmable gate array industry. Within the Asia Pacific, many nations including China, Taiwan, South Korea, and others have seen a massive increase in the consumer electronics industry in the past few years. As a result, the FPGA market in the area is seen as a leverage point. Furthermore, rapid industrialisation and urbanisation across the region open up new opportunities for area FPGA industry players. China had the highest revenue share in the country, owing to the government's ongoing investments and initiatives to boost the industry's growth. For example, in March 2018, China established a USD 28.9 billion government-backed semiconductor fund to support the country's chip industry. This effort focuses on creating new commercial prospects by manufacturing FPGAs, central processing units, and memory chips.

North America is another significant region for the product. Because of its thriving car industry, the region is projected to expand significantly. In November 2018, the Semiconductor Industry Association (SIA) announced the signing of the United States-Mexico-Canada Agreement (USMCA). The agreement is expected to promote open trade, which means that more engineering goods will be manufactured in America, such as semiconductors, and will be exported to clients all around the world. In the coming years, such contracts are likely to fuel business demand.

A field-programmable gate array (FPGA) is an integrated circuit that can be programmed by a customer or a manufacturer after it has been manufactured, hence the name. A hardware description language (HDL), equivalent to that used with application-specific integrated circuits, is used to specify the FPGA setup (ASIC). Previously, circuit diagrams were used to define the structure, but with the advent of electronic design automation methods, this is becoming less common. FPGAs have an assortment of programmable logic blocks and a hierarchy of "reconfigurable interconnects" that allow blocks to be "wired together," similar to how many logic gates can be inter-wired in various configurations. Complex combinational functions can be performed using logic blocks, or basic logic gates like AND and XOR can be used. 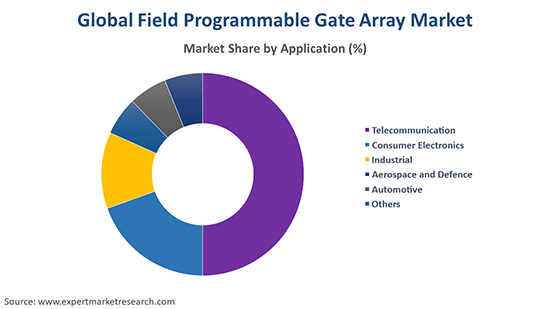 By architecture, the market is divided into:

Based on configuration, the market is segmented into:

On the basis of application, the market is categorised into: 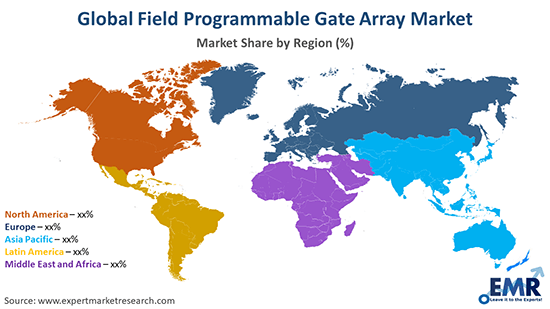 The industry is being fuelled by the increasing penetration of AI and deep learning technology, coupled with the rising demand for high-performance computing around the world. After manufacturing, a field programmable gate array, that is, is a semiconductor system can be programmed and reprogramed to meet the desired functionality and application requirements. Because of these characteristics, it is more adaptable than competing technologies, such as application-specific standard products (ASSPs) and complex programmable logic devices (CPLDs). FPGA devices have gained popularity in AI workstations, edge AI devices, and high-performance computing (HPC) applications due to their high performance, cost efficiency, and energy efficiency.

The FPGA market is seeing rapid growth due to rising network traffic and the need for high data processing across datacentres. FPGA systems are used in a variety of data centre hardware, including disc and server cabinets, as well as networking equipment. These systems assist data centre hardware in lowering network latency and optimising storage and processing applications. The increased investments by data centre operators in the construction of new facilities would further expand business opportunities in the forecast period.

The report gives a detailed analysis of the following key players in the global field programmable gate array market, covering their competitive landscape, capacity, and latest developments like mergers, acquisitions, and investments, expansions of capacity, and plant turnarounds:

What are the key industry trends of the global field programmable gate array market?

The increasing penetration of artificial intelligence (AI) and deep learning technology, coupled with the rising demand for high-performance computing are the key industry trends propelling the market's growth.

What are the major regional markets of field programmable gate array, according to the EMR report?

What are the segments based on the architecture in the market?

By architecture, the market is divided into SRAM, anti-fuse, and flash, among others.

What are the configurations in the market?

Field programmable gate array find their major application in telecommunication, consumer electronics, industrial, aerospace and defence, and automotive, among others.

The major players in the industry are Xilinx, Inc., QuickLogic Corporation, Achronix Semiconductor Corporation, Efinix Inc, and Intel Corporation, among others.

The global field programmable gate array market has been driven by the increasing penetration of artificial intelligence (AI) and deep learning technology in the historical period. Aided by rising network traffic and rising demand for high-performance computing, the market is expected to witness further growth in the forecast period of 2023-2028, growing at a CAGR of 7.7%.

EMR's meticulous research methodology delves deep into the market, covering the macro and micro aspects of the industry. By architecture, the market is divided into SRAM, anti-fuse, and flash, among others. Based on configuration, the market is segmented into low-range FPGA, mid-range FPGA, and high-range FPGA. Field programmable gate array find their major application in telecommunication, consumer electronics, industrial, aerospace and defence, and automotive, among others. The major regional markets for field programmable gate array market are North America, Europe, the Asia Pacific, Latin America, and the Middle East and Africa. The major players in the industry are Xilinx, Inc., QuickLogic Corporation, Achronix Semiconductor Corporation, Efinix Inc, and Intel Corporation, among others.