Global Fortified Wine Market to grow at a CAGR of 3.8% During 2021-2026, Driven by the Robust Economic Growth in the Developing Countries 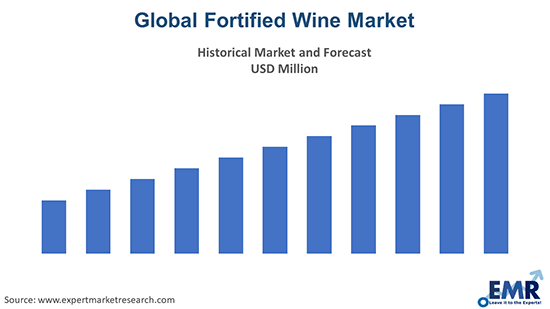 Region-wise, the Asia Pacific is expected to witness a steady growth in the forecast period owing to the robust economic growth in the developing countries and growing acceptance of alcoholic beverages in the region. The presence of a large population and the growing popularity of the product, particularly among the millennials, are significantly aiding the regional industry growth. This is further supported by the expanding retail outlets and growing internet penetration in the region, which is allowing consumers to make independent choices. In Latin America, sherry is often used in cooking and also paired with food, which is expected to act as a major driver for the market. In developed regions like North America and Europe, the increased adoption of fortified wines as an end-of-meal drink is aiding the industry growth. In Europe, the fortified wine industry is already in the maturity phase, thereby the region is expected to register a stagnant growth in the forecast period. 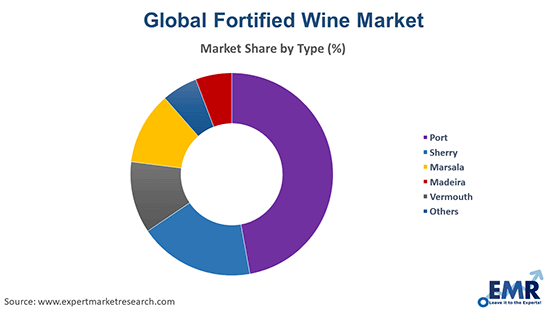 Fortified wine refers to the wine that has been fortified with distilled spirits, usually brandy, to delay fermentation and prevent it from spoilage. These hefty wines are produced via the addition of a neutral grape spirit to a base wine to enhance the booze content and give it a longer shelf life. Apart from higher alcohol content, fortified wines are known for their unique flavour and aroma that sets it apart from regular varieties.

Based on nature, the market is bifurcated into:

The various types of fortified wine available in the market include:

On the basis of body, the industry can be segmented into:

Based on distribution channel, the industry can be categorised into: 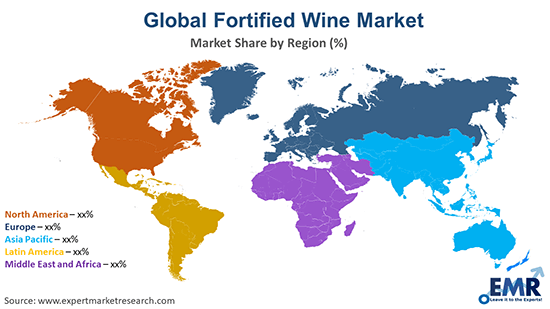 The growing acceptance of alcohol and the rising preference for wine among consumers, particularly in developing nations, are driving the growth of the fortified wine industry. This is supported by the expanding distribution channels and growing popularity of online retailing. The other factors like escalating consumer disposable incomes, rising living standards, growing demand for alcoholic beverages, and advancing food and beverages sector are further propelling the fortified wine industry growth.

The growing investments by the key players in product marketing and promotion to raise consumer awareness are expected to significantly contribute to the industry growth over the forecast period. In various countries, particularly the ones outside Europe, the image and knowledge about fortified wines are unclear and their taste is also regarded as poor and unacceptable. Thus, the growing educational marketing about fortified wine is expected to have a positive effect on the expansion of the global fortified wine industry.

The report gives a detailed analysis of the following key players in the global fortified wine market, covering their competitive landscape, capacity, and latest developments like mergers, acquisitions, and investments, expansions of capacity, and plant turnarounds:

What is the growth rate of the global fortified wine market?

The major drivers of the industry, such as rising disposable incomes, increasing awareness, rising demand from the developing regions, increasing popularity among millennials, growing internet penetration, and expanding retail industry, are expected to aid the market growth.

What are the key industry trends of the global fortified wine market?

The key market trend guiding the growth of the market includes the growing focus on product marketing by the key payers.

What are the major regional markets of fortified wine, according to the EMR report?

What are the leading nature segments in the market?

The leading nature segments in the market are dry wine and sweet wine.

What are the major types of fortified wine in the industry?

The major types of fortified wine in the industry are port, sherry, marsala, madeira, and vermouth, among others.

What are the significant body types in the market?

The significant body types in the market are light bodied, medium bodied, and full bodied.

The leading distribution channels in the industry are online and offline.

The major players in the industry are Mazuran's Vineyards Limited, Curatolo Arini, Taylor's Port, Albina & Hanna, and Sogevinus Fine Wines SL, among others.

The global fortified wine market is being aided by the growing demand from the developing regions . Aided by the rising product marketing, the market is expected to witness a moderate growth in the forecast period of 2022-2027, growing at a CAGR of 3.8%.

EMR’s meticulous research methodology delves deep into the market, covering the macro and micro aspects of the industry. By nature, the market is divided into dry wine and sweet wine. Based on type, the industry is divided into port, sherry, marsala, madeira, and vermouth, among others. On the basis of body, the market is segmented into light bodied, medium bodied, and full bodied. By distribution channel, the industry is bifurcated into online and offline. The major regional markets for fortified wine are North America, Europe, the Asia Pacific, Latin America, and the Middle East and Africa. The key players in the above market include Mazuran's Vineyards Limited, Curatolo Arini, Taylor's Port, Albina & Hanna, and Sogevinus Fine Wines SL, among others.

The global food grade alcohol market attained a value of about USD 7.35 billion in 2020, driven by the extensive use of the product in the pharmaceutical and nutraceutical industry. Aided by the new p...
Read More

The global dark spirits market attained a value of about USD 81.7 billion in 2020, driven by the rising e-commerce sites and delivery services, facilitating the availability of liquor. Aided by the gr...
Read More

The global snus market is driven by the increasing popularity of smokeless tobacco products, increased use of snus as a substitute for cigarettes around the world, increased introduction of new innova...
Read More

The India whiskey market attained a volume of 135. billion litres in 2020, driven by the changing lifestyle of people. Aided by the rapid urbanisation and the growing preference for premium alcoholic ...
Read More

The global rhum agricole market was driven by the overall rise in modern trade, business-to-business  trade, and e-commerce in the historical period. Aided by increasing demand among consumers and ri...
Read More