Global Fresh Milk Market to be Aided by the Rising Milk Production, Estimated to Attain 948 Million Tonnes in 2026

The fresh milk market is aided by the growing milk production globally. The global output in 2020 stood at over 837 million tonnes, rising by 2.1% from 2018. Production is expected to grow further in the forecast period of 2023-2028, to reach approximately 948 million tonnes in 2026. 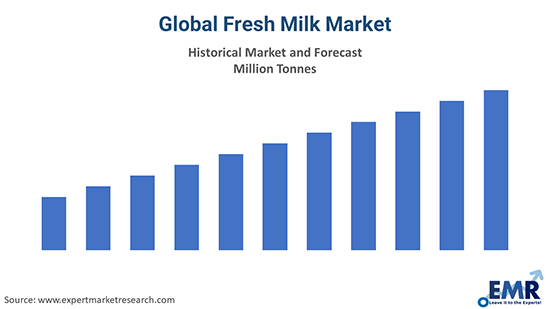 In the coming decade, the milk production is expected to witness an average annual increase of 1.8%. Majority of the milk and dairy products are consumed as fresh dairy products accounting for almost 50% of the total global production.

Europe and North America will be the other major milk producing regions in the forecast period. The growth in milk production is expected to be slow in the forecast period at less than 1% annually. Even though the herd size has been declining, the milk yields have been growing in these regions. The yield in the European Union is projected to grow by 1.2% per annum in the next five years. While the market share of European Union countries in terms of production is similar to that of India, India is expected to surpass the European Union in the coming years in terms of its total output. 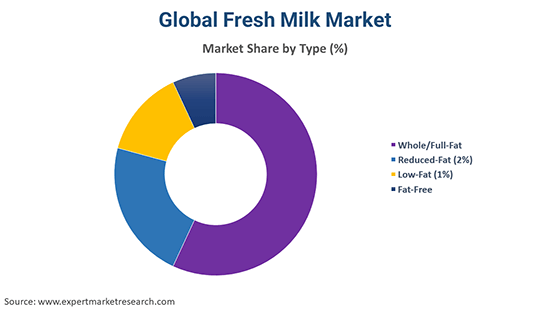 The market in this EMR report is bifurcated into:

The fresh milk market is being driven by the continuous expansion in the exports of fluid milk, which saw a 4% increase in 2017 after witnessing a robust growth of 16% in 2016. With rising health awareness among the consumers globally, its demand has been witnessing a growth in recent years. Retailers are coming up with innovative packaging solutions aimed at increasing the shelf life, which will, in turn, boost the sales in the forecast period. With a rising number of dairies transitioning into organic milk production, the fresh milk market is projected to grow further. In the US, organic milk accounted for 18% of the total sales. Currently, flavoured milk is the leading segment in the fresh milk market.

The report gives a detailed analysis of the following key players in the global fresh milk market, looking into their capacity, market share, and latest developments like mergers and acquisitions, capacity additions, and plant turnarounds:

What was the global fresh milk market size in 2020?

The global fresh milk market reached a production volume of about 837 million tonnes in 2020.

What is the forecast outlook of the global fresh milk market for 2023-2028?

The production volume of fresh milk is expected to reach approximately 948 million tonnes by 2026.

The major drivers of the industry such as rising disposable incomes, increasing population, and the rising dairy industry.

What are the key industry trends of the global fresh milk market?

The rising health consciousness among the consumers is expected to be a key trend guiding the growth of the industry.

What are the major regions of global fresh milk market, according to the market report?

What are the leading types of fresh milk in the industry?

The leading types of fresh milk in the industry include whole/full-fat, reduced-fat (2%), low-fat (1%), and fat-free.

What are the significant application segments of the industry?

The significant application segments of the industry include household and commercial.

EMR’s meticulous research methodology delves deep into the industry, covering the macro and micro aspects of the industry. Based on types, the market can be segmented into organic whole/full-fat, reduced-fat (2%), and low-fat (1%), fat-free. On the basis of application, the market can be divided between household and commercial. The major regional markets are North America, Europe, the Asia Pacific, Latin America, and the Middle East and Africa. The key players in the above industry include Nestle SA, China Mengniu Dairy Company Limited, Arla Food Group, Cooperativa Central Dos Produtores Rurais De Minas Gerais Ltda. (Itambe),
Gujarat Cooperative Milk Marketing Federation Ltd. (Amul), DMK Deutsches Milchkontor GmbH, Dairy Farmers of America, Inc., Others.