Global Fuel Oil Market to Grow at a Rapid Pace in the Forecast Period, Aided by the Rising Industrialisation

The global fuel oil market reached a volume of 4.8 MBPD in 2020, driven by the increased demand for crude oil across the world. 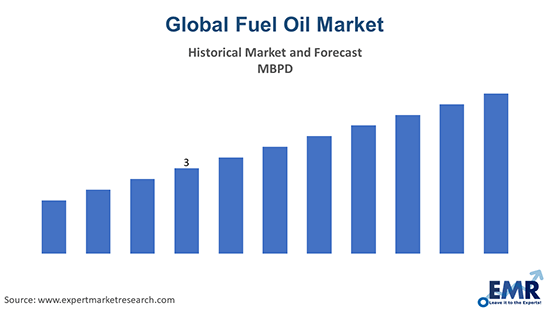 The global fuel oil market is primarily driven by the crude market oil, which is majorly being driven by the Middle East region, which tops the list in terms of oil production. The region has booming demand for crude oil for exports to other nations. This is further driving the fuel oil market. The high maturity markets of the product include the United States, Australia, Canada, and Europe. The United States is dependent on imports from Canada and East Coast Russia. The regions which have a high scope of growth are Brazil, Chile, and South Africa. Within the Asia Pacific region, India, Korea, and Singapore are the major exporting regions, exporting heavy volumes to the other countries in the region. Similarly, within Latin America, Brazil is the net exporter of the product to the other countries in the region.

Fuel oil (also known as heavy oil, marine fuel, or furnace oil) is a fraction of the oil produced by distillation, either as a distillate or as a residue. Fuel oil refers to any liquid fuel that is usually burned in the boiler or furnace for heat generation. It is also used in the engine for the purpose of power generation, excluding oils with a flashpoint of approximately 42°C (108°F) and oils burned in wool wick burners or cotton. Fuel oil comprises long chains of hydrocarbons, alkanes, cycloalkanes, and aromatics. Fuel oil is applicable in a stricter sense to refer to the heaviest and the hardest commercial fuel that is obtained as the derivative of crude oil, i.e., heavier than petrol and naphtha. Fuel oil finds plenty of end-uses in electricity generation, road and domestic waterways, marine bunkers, petrochemicals, agriculture, commercial, as well as residential purposes. These oils could be delivered through pipelines, trucks, bunker ships, or retail fuel outlets. 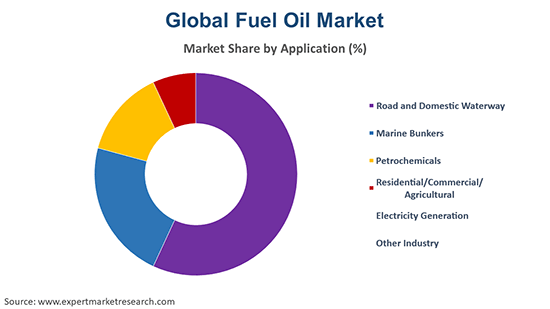 On the basis of application, the market can be segmented into the following:

The market for fuel oil is being driven by the increasing application of heating oil, especially in the United States of America. The oil is widely used in boilers as well as furnaces, both in commercial as well as residential buildings. The demand for fuel oil is also being aided by the rising demand for electricity in power plants, which is generated with the help of fuel oil. Some constraints to the market like lower outputs during the Covid-19 lockdowns and increasing government regulations on crude oil extraction.

The major driving factor for the fuel oil market is the growing demand for crude oil among its consumers. Fuel oil is a residue of crude oil received after the distillation process. The increasing output of crude oil, thus, results in an increased output of fuel oil. The rising demand for crude oil, especially in North America, owing to the abundant of shale oil reserves and superior technologies, is driving the growth of fuel oil further.

The demand is also boosting in emerging regions like China and India. The economic growth of these countries is leading to more industries, leading to increased demand for fuel oil. The growth is also being aided by the rapidly rising population as well as urbanisation.

The report gives a detailed analysis of the following key players in the global fuel oil market, covering their competitive landscape, capacity, and latest developments like mergers, acquisitions, and investments, expansions of capacity, and plant turnarounds:

What was the global fuel oil market size in 2020?

What are the major market drivers for the global fuel oil market?

The major drivers of the industry include growing demand for crude oil across the world due to rapid industrialisation and growing populations, and more oil exploration projects.

What are the key industry trends of the global fuel oil market?

The overall trend in the global fuel oil market appears to be a constant growth with a consistent growth rate due to increasing population, improving industrial infrastructure and increasing oil exploration projects.

Which are the applications for the global fuel oil industry?

The major applications for the global fuel oil industry are marine and industrial, among others.

How can the industry be segmented according to regions?

The global fuel oil market reached a volume of 4.8 MBPD in 2020, primarily driven by the rising demand of fuel oil worldwide. Aided by growing industrialisation, the industry is expected to witness a further growth in the forecast period of 2022-2027.

EMR’s meticulous research methodology delves deep into the industry, covering the macro and micro aspects of the industry. Based on the applications, the global fuel oil market can be segmented into marine and industrial, amongst others. The different regions considered for the fuel oil market are North America, Europe, Asia Pacific, Latin America, and Middle East & Africa. The key players in the above industry include Alicid Organic Industries Ltd., Chevron Corporation (NYSE: CVX), Public Joint Stock Company Gazprom (MCX: GAZP), Qatar Petroleum, and Royal Dutch Shell plc (AMS: RDSA), amongst others.

The global crude oil improvers market is predicted to grow at a CAGR rate of 4.90% in the forecast period of 2022-2027. Where North America has a strong base in the market, the Asia Pacific shows rapi...
Read More

The global gasoline market was driven by the rise in the number of automobiles in the historical period. Aided by the rising population and rapid industrialisation, the market is expected to grow at a...
Read More

The global charcoal briquette market is driven by the surging demand for energy and technological advancement. Aided by growing environmental concerns among consumers, the market is expected to witnes...
Read More

The global aviation gasoline (Avgas) market attained a value of USD 1.8 billion in 2021, driven by the increased need for small piston aircraft for sporting activities. Aided by the growing number of ...
Read More

The global carbon capture and sequestration market attained a value of nearly USD 6.3 billion in 2021, driven by the emerging need to reduce carbon dioxide concentrations in the atmosphere. Aided by t...
Read More