The global green roof market is being driven by the rising demand for manufacturing sustainable products and adopting a greener approach to tackle climate change. The overall green roof and wall market attained a value of nearly USD 8 billion in 2020. The green roof and wall market is further expected to witness a healthy growth in the forecast period of 2021-2026, growing at a CAGR of 9.7% to reach USD 13.7 billion by 2026.

Europe is the largest regional green roof market globally. Within Europe, Germany is the major contributor to the industry. In Germany, more than 90 million metre square of the product have been installed. Also, in London, the product has been widely adopted due to the major influence of the London Plan and accounts for about 42% of all UK green roofs. Several private companies have brought some of Europe’s newest green roof designs across the Atlantic to North America, thus, making North America a major emerging market for the industry.

In North America, the gradual acceptance of the product has taken place along with their use as a sustainable design practice for the environmental benefit. In the U.S., the U.S. Green Building Council (USGBC) adopted the product as a measure to reduce stormwater runoff and fight urban heat islands. Also, San Francisco became the first U.S. city where the product became mandatory on new construction from 2017.

The Asia Pacific is the fastest-growing market in the industry. Within the Asia Pacific, China decided to create sponge cities, where green roofing would be one of the key elements to tackle the environmental problems brought about by rapid urbanisation. In Shenzhen city of China, subsidies are being provided for green roofing so that the area under the product can be increased by 200,000 ? from 2014 to 2021. 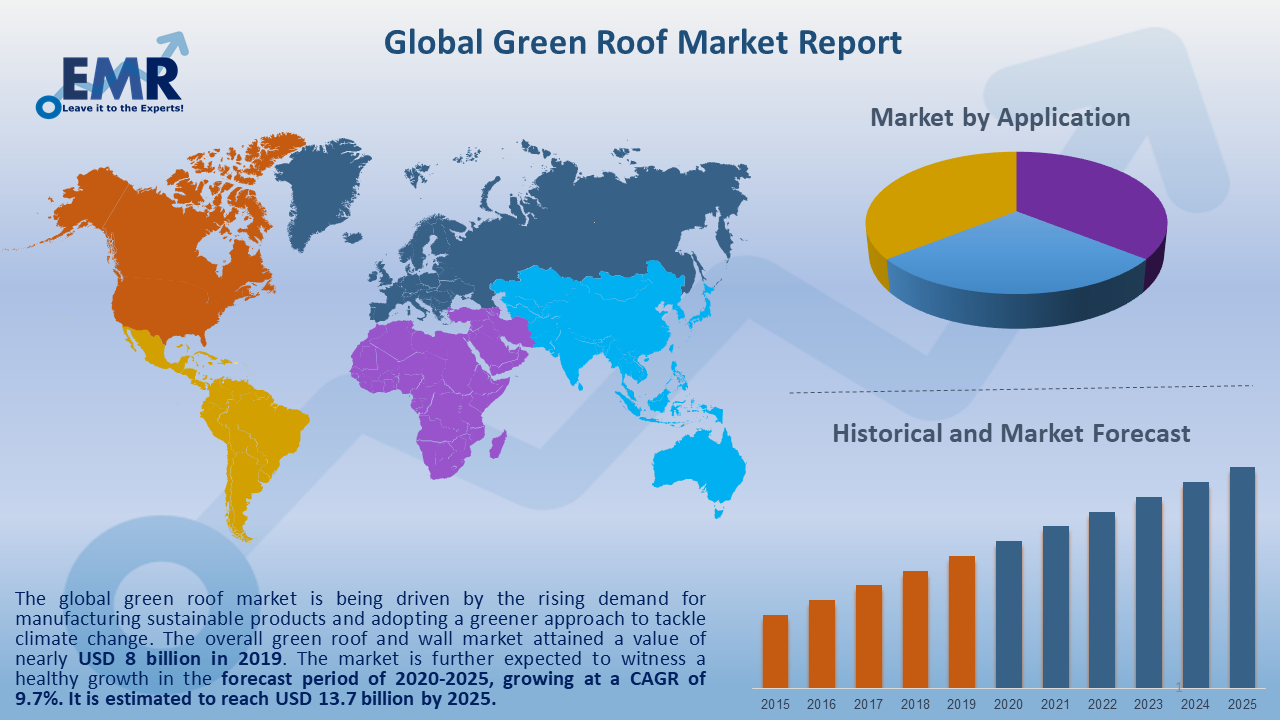 A green roof refers to a continuous layer of vegetation and soil, covering the surface of a roof. The major components required to construct the product are waterproofing, soil, and plants. They have proved to be instrumental in increasing the energy performance of buildings and in improving the health of urban watersheds and air quality. On the basis of type, the industry can be categorised as

The extensive types can be installed at a lower cost in comparison to the intensive types, and, thus, they dominate the market share. Based on application, the industry can be categorised as:

The EMR report also covers the regional markets of the product like North America, Europe, the Asia Pacific, Latin America, and the Middle East and Africa.

The global green roof market is driven by the surged demand to adapt to greener methods and resources for the sustainable development of our environment. The rapid urbanisation accompanied with a massive increase in carbon emission and urban waterlogging has led to the growth of many environmental-related problems. The deteriorating air quality and an increased greenhouse effect are creating a rising demand for environmentally friendly technologies like green roof, further aiding the green roof market.

The construction of green roofs allows for modern social development as well as sustainable development in comparison to the conventional gravel-ballasted roof, which contributes to the problem of the urban heat island and water scarcity. The new technology, using natural processes, helps in conserving water and reduce solar heat gain. They help to reduce the carbon load of buildings, especially in the summertime, which results in a cooler environment and less consumption of electricity. They also help in controlling greenhouse gas emissions. Thus, its use makes a construction eco-friendly and energy-efficient. These favourable factors are driving the healthy expansion of the green roof market.

Globally, several initiatives have been taken by the government to attract individuals or organisations for using the product, like, in some European and US cities, councils now offer significant financial incentives to developers installing green roofs. In Hamburg, those installing green roofs can receive a subsidy of 30-60% on its installation cost. Thus, the lump-sum grants provided by the government help in the implementation of the product on a large scale and give a further impetus to the industry growth.

The report gives a detailed analysis of the following key players in the global green roof market, covering their competitive landscape, capacity, and recent developments like mergers, acquisitions, and investments, expansions of capacity, and plant turnarounds:

The EMR report provides an in-depth analysis of the market by giving a SWOT and Porter’s five forces analysis.

What was the global green roof and wall market size in 2020?

In 2020, the global green roof and wall market attained a value of nearly USD 8 billion.

What is the forecast outlook of the global green roof and wall market for 2021-2026?

The global green roof and wall market is estimated to witness a healthy growth in the forecast period of 2021-2026 to reach about USD 13.7 billion by 2026.

The major drivers of the industry, such as rising disposable incomes, rapid urbanisation, rising demand for environmentally friendly technologies, rising demand from the developing regions, and several initiatives have been taken by the government, are expected to aid the market growth.

What are the key industry trends of the global green roof market?

The key market trends guiding the growth of the green roof market include the rising demand for manufacturing sustainable products and adopting a greener approach to tackle climate change.

What are the major regional markets of green roof, according to the EMR report?

The major regions in the global green roof market are North America, Latin America, the Middle East and Africa, Europe, and the Asia Pacific, with Europe accounting for the largest share in the market.

What is the leading type of the product in the industry?

The extensive segment is the leading type of the product in the industry.

What are significant application sectors of the product?

Residential, commercial, and industrial are the significant application sectors of the product.

Who are the key players of green roof market, according to the report?

EMR’s meticulous research methodology delves deep into the market, covering the macro and micro aspects of the industry. Based on its types, the global green roof market can be segmented into extensive, semi-intensive, and intensive, with the extensive segment accounting for the largest share in the market. On the basis of application segments, the industry is divided into residential, commercial, and industrial. The major regional markets for the product are North America, Europe, the Asia Pacific, Latin America, and the Middle East and Africa, with Europe accounting for the largest share of the market. The key players in the above market include Axter Limited, American Hydrotech, Inc., Barrett Company, Bauder Ltd, Columbia Green Technologies, ArchiGreen, ZinCo Canada Inc., and others.

The electroluminescent (EL) panels market is expected to grow at a CAGR of about 7% in the forecast period of 2021-2026.
Read More

The North America steel roofing market stood at a value of almost USD 2.7 billion in 2020. The industry is further expected to grow at a CAGR of almost 5% in the forecast period of 2021-2026 to reach ...
Read More

The Asia Pacific is the largest regional insulation market, driven by the rising industrialisation, urbanisation, and infrastructural sector in countries like India, China, Malaysia, Indonesia, and th...
Read More

The roofing market in the US alone attained a value of about USD 26 billion in 2020. Due to rapid urbanization, technological innovations and a rise in construction activities, the global construction...
Read More