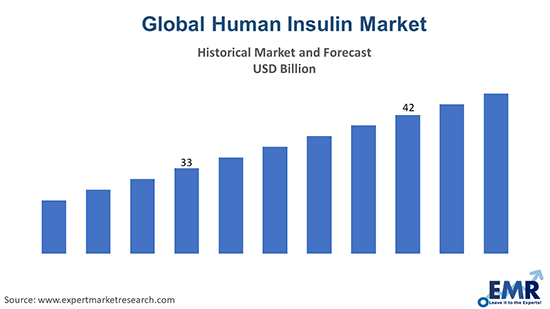 Human insulin is referred to the synthetic insulin, which is grown in the laboratory and simulates the insulin in humans. The function of insulin is to regulate fat and carbohydrate metabolism in the body. It was developed through the 1960s and 1970s and finally approved for pharmaceutical use in 1982. 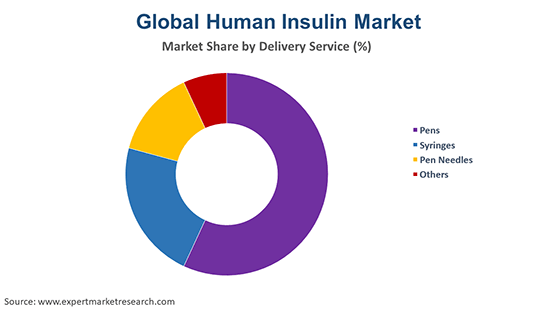 On the basis of product type, the market is divided into:

Based on type, the industry can be segmented into:

Insulin analogs and biosimilars is further divided on the basis of types into long acting, rapid acting, and pre-mixed, whereas delivery device is divided into intermediate-acting, short-acting, pre-mixed.

By brand, the industry is categorised into:

On the basis of delivery service, the industry is segregated into:

Based on applications, the industry is divided into: 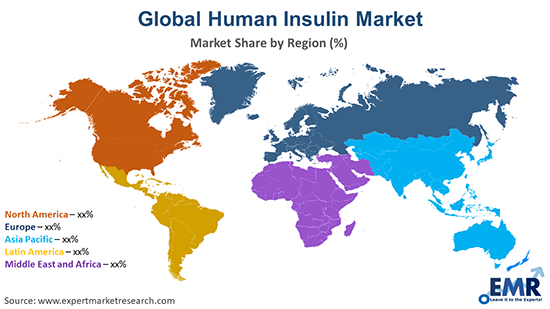 The market for human insulin is driven by the rising cases of diabetes and obesity across the globe, which are the resultants of changing lifestyles and unhealthy consumption of sugar in various food and beverages. In addition, the rising investments in research and development activities by several organisations have led to an advanced and easier way of injecting insulin, which is also boosting the market growth of human insulin. Moreover, the introduction of the safety pen devices and pen needles for effective delivery of insulin is propelling the global market forward. Further, growing awareness of diabetes is expected to bolster the demand in the human insulin industry.

The report gives a detailed analysis of the following key players in the global human insulin market, covering their competitive landscape, capacity, and latest developments like mergers, acquisitions, and investments, expansions of capacity, and plant turnarounds:

What was the global human insulin market size in 2020?

In 2020, the global human insulin market attained a value of nearly USD 36 billion.

The industry is primarily being driven by the growing incidences of health issues such as obesity, changing consumer lifestyles, increased investments in research and development of advanced insulin injection mechanisms, and the availability of safety pen devices and pen needles for optimal insulin delivery.

What are the key industry trends of the global human insulin market?

The key trends boosting the market growth are the rising incidences of diabetes and the increasing geriatric population.

What are the major regional markets of human insulin, according to the EMR report?

What are significant product types considered within the market report?

The significant product types include drugs and delivery device.

The major types of the product include insulin analogs and biosimilars, and delivery device.

What are significant brands considered within the market report?

What are the different delivery devices considered within the market report?

The different delivery devices include pens, syringes, pen needles, and others.

The major applications of the product include Type 1 and Type 2.

The major players in the industry are Nova Nordisk A/S, Biocon Limited, Sanofi S.A., Pfizer Inc., Eli Lilly and Company, and others.

The global human insulin market attained a value of USD 36 billion in 2020, driven by the rising incidence of diabetes and the increasing geriatric population. Aided by the growing medical and biotechnology industries, the market is expected to witness a further growth in the forecast period of 2023-2028, growing at a CAGR of 4.7%.

EMR’s meticulous research methodology delves deep into the market, covering the macro and micro aspects of the industry. Based on product type, the global human insulin industry can be segmented into drugs and delivery device. By type, the industry can be divided into insulin analogs and biosimilars, and delivery device. Based on brand, the market can be divided into NovoRapid/Novolog, Humalog, Insuman, Humulin, Lantus, Actrapid, Insulatard, and Mixtard, and others. By delivery device, the market can be classified into pens, syringes, pen needles, and others. On the basis of application, the market can be categorised into type 1 and type 2. The major regional markets for human insulin are North America, Latin America, Europe, the Middle East and Africa, and the Asia Pacific. The key players in the above market include Nova Nordisk A/S, Biocon Limited, Sanofi S.A., Pfizer Inc., Eli Lilly and Company, and others.