Owing to various supporting factors, conventional light bulbs in India are easily being replaced by LED lights. Furthermore, as LEDs are progressively used in automotive headlamps, aviation, general lighting, advertising, lighted wallpapers, medical devices, camera flashes as well as traffic signals, the LED lighting market is expanding throughout the country. In addition, the entry of Chinese LED light producers in India has enabled Indian manufacturers to offer innovative products. The Northern Region has the highest proportion of sales in India's overall market, followed by the Southern Region. Supported by various upcoming infrastructural projects throughout residential, industrial, and commercial areas across the country, the market for LED lighting is likely to see strong growth in the forecast years.

The Indian LED lighting market has seen an increase due to population growth and subsequent urbanisation in the historical period. With a growing rate of electricity use, demand for an environmentally sustainable and cost-effective lighting solution is also gaining momentum. Thus, LED lighting has begun to dominate the general lighting market of India tremendously in recent years. Several government schemes, like Unnat Jyoti by Affordable LEDs for All (UJALA) as well as Street Lighting National Program (SLNP), has remained India's largest demand generator for LED lighting. The goal of these initiatives is to raise consumer awareness of the adoption of LED bulbs over traditional lighting sources like incandescent bulbs, CFL, and halogen lights. For example, under the SLNP, the Government plans to replace more than 1.34 crore traditional street lights in India, of which approximately 1.04 crore street lights have already been replaced as of November 2020.

Light-emitting diode (LED) refers to a semiconductor that emits light as the electrical current passes through it. Often known as solid-state lighting, LED lights have potential advantages over halogen, fluorescent, and incandescent lights like energy efficiency, longer lifetime, and exceptionally low power consumption.

The market on the basis of product is segmented into:

On the basis of region, the market is divided into: 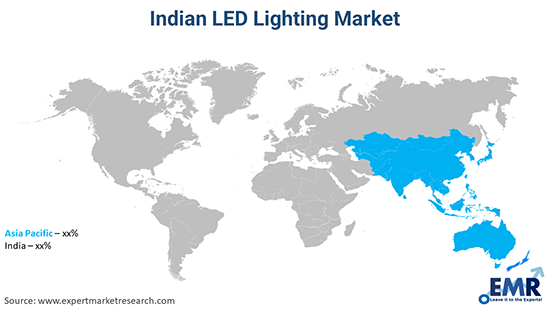 Various advantages offered by LED lights, such as improved physical strength, smaller size, faster switching, high durability, and lower heat production, contribute significantly to the development of the LED lighting industry in India. In addition, increasing customer perception of cost-effectiveness, improved life, improved performance, and the inherent eco-friendly value of LED lighting will continue to drive the sales in the retail, residential, and commercial sectors. Moreover, the Indian Government is supporting LED street lighting initiatives and providing LED lights at discounted rates. For example, over 2.1 million traditional street lights have been replaced by LED street lights throughout the region under the Street Lighting National Program (SLNP). In addition, the 'Make in India' initiative introduced by the Government has established electronics as a key sector and emphasises on attracting capital and technical investment in India.

The report gives a detailed analysis of the following key players in the Indian LED lighting market, covering their competitive landscape, capacity, and latest developments like mergers and acquisitions, investments, expansions of capacity, and plant turnarounds:

The major drivers of the industry, such as rapid urbanisation, growing awareness regarding the environment, increased adoption of energy efficient and devices, and increased government initiatives, are expected to aid the market growth.

What are the key trends of the Indian LED lighting market?

The key trend guiding the growth of the market include the launch of a sustainable and cost-effective lighting solution with improved performance.

What are the major regional markets of LED lighting in India, according to the EMR report?

What are the significant products of LED lighting in the market?

Panel lights, down lights, street lights, tube lights, and bulbs, among others, are the significant LED lighting products in the market.

What are the major applications of LED lighting in India?

The Indian LED lighting market is further expected to grow at a CAGR of more than 23.4% in the forecast period of 2023-2028.

EMR's meticulous research methodology delves deep into the market, covering the macro and micro aspects of the market. Based on its products, the LED lighting market can be segmented into panel lights, down lights, street lights, tube lights, and bulbs, among others. On the basis of applications, the market is categorised into commercial applications, residential applications, institutional applications, and industrial applications. The major regional markets for LED lighting in India are North Region, East and Central Region, West Region, and South Region. The key players in the above market include Bajaj Electricals Limited, Havells India Ltd, Wipro Limited, Goldmedal Electricals Pvt. Ltd, Syska LED Lights Pvt Ltd, Signify Holding, Crompton Lamps Ltd, Finolex Cables Ltd, Corvi LED Pvt Ltd, and Halonix Technologies Private Limited, among others.