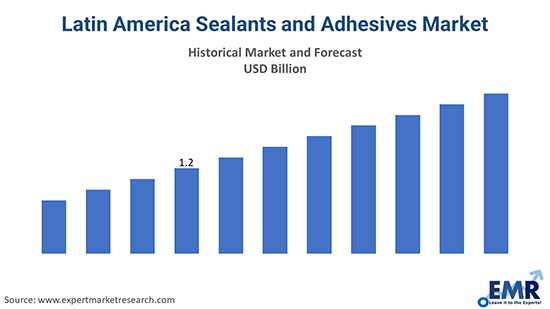 The global sealants and adhesives industry is expected to witness a steady increase in the forecast period of 2022-2027, growing at a CAGR of 3.7%. By 2026, it is projected to reach USD 74.6 billion.

Globally, packaging, construction, and automotive industries are some of the major end-use sectors for both sealants and adhesives. The rising global population and various government-funded infrastructure projects to meet the needs of the growing urban population are propelling the industry forward. The global construction output is projected to witness a growth of almost 85% from the current production in 2030. By 2030, it is expected to be worth USD 15.5 trillion. This robust rise in the construction industry will aid the growth of the sealants and adhesives industry in the forecast period. The packaging industry, meanwhile, is also witnessing a healthy growth globally due to the rise of e-marketing portals and the increasing consumption of packaged foods. The global adhesives and sealants industries are also finding impetus in the rising demand for lightweight vehicle amidst increasing environmental concerns. The rising preference for lightweight vehicles is especially driving segments like silicone sealants and water-based adhesives as they contribute to lower vehicle weight and the reduction of greenhouse gases production.

Brazil dominates the Latin America sealants and adhesives market. It accounts for over half the regional industry. The country is followed by Colombia and Argentina who also account for significant shares in the regional industry. The industry in Latin America is being aided by the healthy growth of its automobile industry. Brazil is a leading car market in Latin America, accounting for nearly half the vehicle sales in the region. In 2017, the vehicle registrations in the country witnessed an increase of 9.2% as compared to the previous year, with nearly 2.17 million new vehicles being registered in the year. Its emerging electric vehicles industry might act as a catalyst for the sealants and adhesives industry in the country in the coming five years.

Sealants protect structures from environmental damage by preventing water, dirt, and dust from entering by sealing the gaps between joints and the substrates. They usually have a paste-like consistency and have superior elongation properties. Sealants are usually made of silicones, acrylic, butyls, polysulphides, and polyurethanes, among others. They find their applications in the following sectors: 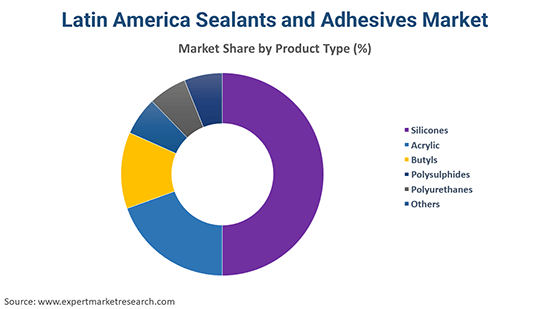 Adhesives are usually available in liquid forms, which solidify upon application and are used to join two surfaces together. They have superior strength, rigidity, and durability as compared to sealants. They can be broadly be divided into:

The major regional markets in the Latin America region are Brazil, Colombia, Mexico, and Argentina. 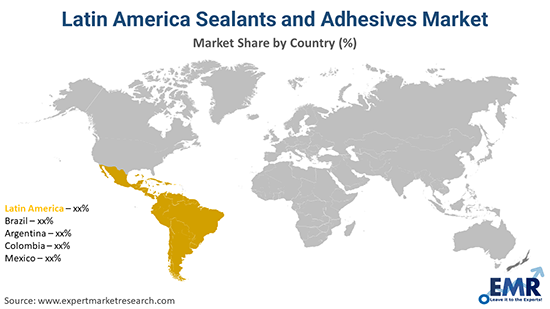 The Latin America sealants and adhesives market is being aided by the rising packaging industry in the region. The emerging middle class has led to increasing investment by consumer goods companies in the region, which is furthering the packaging industry in the country. The cosmetics industry, especially, is a major driving factor for the growth of the packaging industry. The Latin America region accounted for 11% of the global cosmetics industry in 2017. Brazil, the leading sealants and adhesives market in Latin America, is also a major cosmetics market in the region. The industry accounts for almost 1.8% of Brazil’s GDP. The region is also witnessing an increased consumption of packaged and frozen foods, further aiding the packaging as well as sealants and adhesives industry.

The report gives a detailed analysis of the key players in the Latin America sealants and adhesives market, covering their capacity, market share, and latest developments like mergers, acquisitions, and investments, expansions in capacity, and plant turnarounds:

The comprehensive report by EMR gives an in-depth look into the manufacturing processes and the costs involved. It provides an overview of the other regional markets like North America, Asia Pacific, Europe, and the Middle East and Africa. The report also assesses the Latin America sealants and adhesives market based on the Porter’s Five Forces model as well as providing a SWOT analysis.

What is the growth rate of the Latin America sealants and adhesives market?

The major drivers of the industry include the rising end-use sectors such as the automotive and building industries, expansion of urban housing, increasing investment, and increased consumption of packaged and frozen foods.

What are the key industry trends of the Latin America sealants and adhesives market?

The growing middle-class demographic and increasing urbanisation further boost the industry by pushing the development of the sealants and adhesives end-use industries.

What are the major regions of sealants and adhesives in Latin America, according to the EMR report?

The major regions in the industry are Brazil, Argentina, Colombia, and Mexico, among others.

What are the major product types of sealants in the industry?

The major product types in the industry are silicones, acrylic, butyls, polysulphides, and polyurethanes, among others.

What are the significant end use industries of sealants?

The significant end use industries of sealants are construction, consumer/DIY, assembly, and transportation, among others.

What are the major product types of adhesives in the industry?

The major product types of adhesives are reactive systems, solvent based, pressure sensitive, water based, and hot melt.

What are the various end use industries of adhesives?

The various end use industries of adhesives are paper, board and related products, building, construction, civil engineering, craftsmen, woodworking and joinery, transportation, footwear and leather, consumer/DIY, and assembly operations, among others.

The global spray adhesives market attained a value of about USD 6.52 billion in 2021, driven by growing applications in the automotive sector. Aided by the favourable properties of spray adhesives, th...
Read More

The India industrial gaskets market was driven by the robust growth of the refineries segment in the historical period. Aided by the flourishing automotive industry, growing product utilisation in the...
Read More

The global adhesive films market is being driven by the rapid industrialisation, particularly in developing economies, and the growing manufacturing sector. Aided by the increasing demand for consumer...
Read More