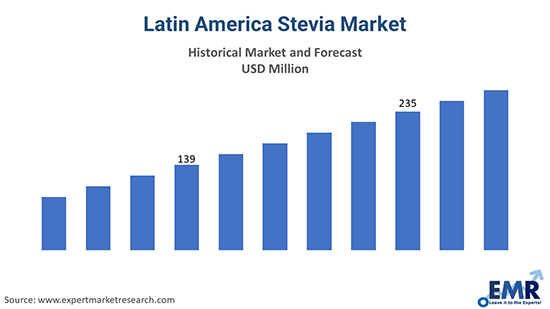 In Latin America, stevia finds the majority of its application in the soft drinks segment followed by the sports nutrition segment. The soft drinks and sports nutrition segments together account for over half the stevia applications in the Latin America and North America regions. Dairy is also emerging as a major application segment for the natural sweetener in the regions, accounting for over 12% of the stevia application. The Latin America stevia market is being aided by the abundance of raw material easily available for processing. The stevia plant is native to Brazil and Paraguay. Paraguay is the region’s largest producer of the natural sweetener. It accounts for over three-fourths of the total stevia production in Latin America. Paraguay is followed by Argentina and Brazil as the leading producers in the region.

The Latin America stevia market is being driven by the growing trend towards sugar reduction in foods and beverages due to increasing rates of type-2 diabetes and obesity occurrence. The growing consumer preference towards healthier food and beverages containing low or no sugar is aiding the industry for sugar-substitutes like stevia. The industry is gaining further impetus from the rising number of government regulations attempting to restrict the intake of sugar. These measures include a front-of-pack warning about high sugar, salt, and fat content on products in Latin America countries like Chile, Peru, and Uruguay. Other countries in the region are also expected to implement similar strategies to combat the growing number of sugar consumption-related diseases.

Stevia, a natural sweetener, produced by processing the leaves of Stevia rebaudiana, finds extensive application as a zero-calorie natural sweetener. It derives its sweetness from its active compounds called steviol glycosides. Stevia sweetener can be extracted as leaves, powder, or liquid. It is commonly used in the following sectors: 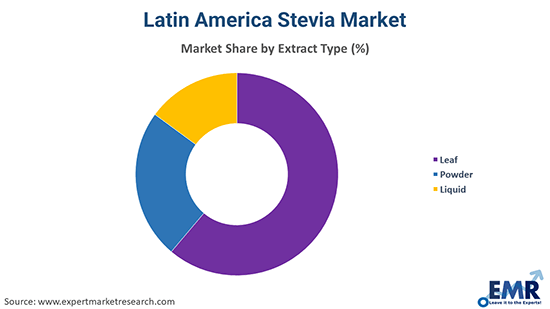 The report also covers the regional markets for stevia in the Latin America region like Brazil, Mexico, Argentina, Colombia, Chile, and Peru, among others.

Globally, the stevia industry is driven by the growing health awareness about the adverse health impact of sugar consumption. The rising consumption of sugar-substitutes for dietary and health reasons is aiding the global industry growth of the natural sweeteners. The industry is also finding impetus in the rising preference of consumers for natural products as they are demanding natural sweeteners over artificial products.

The expanding application sectors for stevia is also driving the growth of the Latin America stevia market. It is finding extensive use in non-food sectors like the personal care and cosmetics section. Stevia is added to cosmetic products like lip balm and lipstick as a natural sweetener. The natural sweetener is also finding increasing use in the oral care sector in items like toothpaste and mouthwash.

The report provides a detailed insight into the following key players in the Latin America stevia market, covering their competitive landsacpe, capacity, and latest developments like plant turnarounds, capacity expansions, and mergers and acquisitions:

The EMR report looks into the manufacturing process and analyses the costs involved. The comprehensive report offers an overview of the other regional markets like North America, Europe, the Middle East and Africa, and the Asia Pacific. It also assesses the Latin America stevia market based on the Porter’s Five Forces Model. A SWOT analysis has been provided, as well.

What is the growth rate of the Latin America stevia market?

The Latin America stevia market is projected to reach USD 261.64 million by 2027

The major drivers of the industry include rising disposable incomes, increasing population, the rising trend towards sugar reduction in foods and beverages, rising middle-class population, and the increasing demand from the personal care and cosmetics sectors.

What are the key industry trends of the Latin America stevia market?

The increase in consumer and manufacturer awareness is expected to be a key trend guiding the growth of the industry.

What are the major regional markets of stevia in Latin America, according to the EMR report?

Brazil, Mexico, Argentina, Colombia, Chile, and Peru, among others, are the leading regions in the market.

What are the leading extract types of stevia in the market?

The leading extract types of stevia in the market are leaf, powder, and liquid.

What are the significant application segments of the product in the industry?

The significant application segments of the product in the industry are food and beverages, oral care, pharmaceutical, and tabletop sweetener, among others.

The Latin America stevia market attained a value of about USD 147.11 million in 2021 driven by rising health concern and consumer awareness about drinks with high sugar content and growing demand for dietary food. The market is expected to witness a further growth in the forecast period of 2023-2028, growing at a CAGR of 9.9%. The stevia market is projected to reach nearly USD 261.64 million by 2027.

EMR’s meticulous research methodology delves deep into the industry, covering the macro and micro aspects of the industry. Based on extract types, the Latin America market for stevia can be segmented into include leaf, powder, or liquid. On the basis of application, the industry can be divided into food and beverages, oral care, pharmaceutical, and tabletop sweetener, among others. The major regional markets for stevia are Brazil, Mexico, Argentina, Colombia, Chile, and Peru,, among others. The key players in the above industry include PureCircle Limited, Cargill, Incorporated, Archer Daniels Midland Company, Ingredion Incorporated, Tate & Lyle PLC, Others.