The global LED street light market is being driven by the rising environmental concern and the growing demand for eco-friendly products. The rapid technological advancement is further supporting the LED street light industry growth globally. As LED street lights are energy-efficient and cost-effective, they are increasingly being adopted for several outdoor lighting applications. As compared to the conventional lights such as fluorescent and incandescent lights, these lighting options consume almost 50-70% less electricity. Thus, their use in places like urban areas, small-town main streets, commercial districts, interstate highway interchanges, and rural intersections is witnessing a healthy growth.

Their use in developed as well as developing nations are experiencing a significant growth owing to the rising awareness regarding climate change. In India, a developing region, the government has taken various initiatives for the promotion and distribution of LED bulb under domestic efficient lighting programme, while in the United States, the New York State Energy Research and Development Authority (NYSERDA) project aims to create a more affordable pathway to LED street light conversion in the country. Such trends are expected to have a positive impact on the global LED street light market in the coming years. 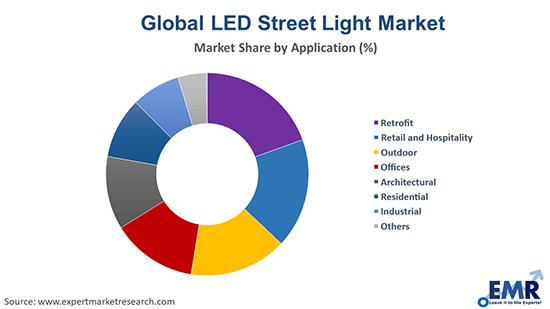 With the evolution of LED technology, the production cost of LED lighting has reduced, offering simultaneous improvements in their efficiency and performance. These enhancements are leading to the incorporation of streetlights with energy-efficient, modern LED systems, thus utilising this technology for lighting roadways and exterior areas. This has further resulted in the development of connected city lighting networks. LED streetlights, being cost-effective and environmentally friendly, are considered as one of the best lighting alternatives for traditional streetlights.

On the basis of applications, the LED street light industry is divided into:

The report also covers the major regional markets in the global LED street light market, which include North America, Europe, Asia Pacific, Latin America, and the Middle East and Africa. 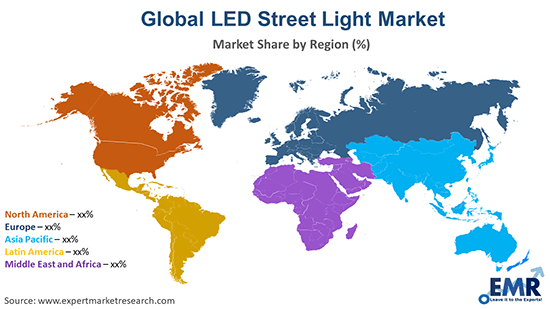 The global LED street light market is being supported by the rising environmental concern and growing awareness regarding the benefits of LED lights over traditional lights, such as compact fluorescent and incandescent lamps. Further, the growing industrialisation and rapid urbanisation, particularly in the emerging economies, is leading to the development of the smart cities. The development of the smart cities is one of the major trends driving the growth of the global LED street light industry.

Moreover, stringent government regulations pertaining to the use of sustainable products, are providing a boost to the industry. For instance, as of September 2020, the Government of Malaysia has announced that it will replace all the streetlights in the region from incandescent/fluorescent bulbs to LED lights. Such initiatives are expected to further aid the global LED street light industry over the forecast period.

The report gives a detailed analysis of the following key players in the global LED street light market, covering their competitive landscape, capacity, and latest developments like mergers, acquisitions, and investments, expansions of capacity, and plant turnarounds:

The global LED street light market reached a value of USD 8 billion in 2020.

The strict government regulations pertaining to the use of sustainable products like LED lighting is expected to be a key trend guiding the growth of the industry.

What are the leading application segments in the industry?

The leading application segments in the industry are retrofit, retail and hospitality, outdoor, offices, architectural, residential, and industrial, among others.

The leading players in the market are XtraLight, Niland, Pemco Lighting Products, LLC, Pkk Lighting, Inc, Eaton, NIPSCO Inc, and Wendel, among others.

The global LED street light market attained a value of USD 8 billion in 2020 driven by the rapid advancement in technology. Aided by the growing demand for eco-friendly products, the industry is expected to witness a further growth in the forecast period of 2023-2028, growing at a CAGR of 26.3%.

EMR’s meticulous research methodology delves deep into the industry, covering the macro and micro aspects of the industry. On the basis of application, the industry can be divided into retrofit, retail and hospitality, outdoor, offices, architectural, residential, and industrial, among others. The major regional markets for LED street light are North America, Europe, the Asia Pacific, Latin America, and the Middle East and Africa. The key players in the above industry include XtraLight, Niland, Pemco Lighting Products, LLC, Pkk Lighting, Inc, Eaton, NIPSCO Inc, and Wendel, among others.