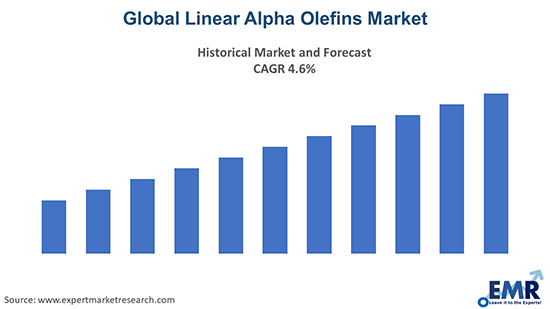 The main uses of linear alpha olefins are as co-monomers in polyethylene production, in the manufacture of poly alpha olefins (used in synthetic lubricants) and in the production of oxo alcohols (used largely in detergents and plasticizers). A recent application of C14 is as an on-land drilling fluid base stock as it is biodegradable and has a significant environmental advantage over other drilling fluids.

Linear alpha olefins, also known as normal alpha olefins, are alkenes with a terminal double bond between the first and the second carbon atom and a chemical formula CXH2X. In 1960s, they were produced by the thermal cracking of waxy paraffin found in crude oils. Nowadays, they are produced on an industrial level by a process of oligomerization of ethylene. 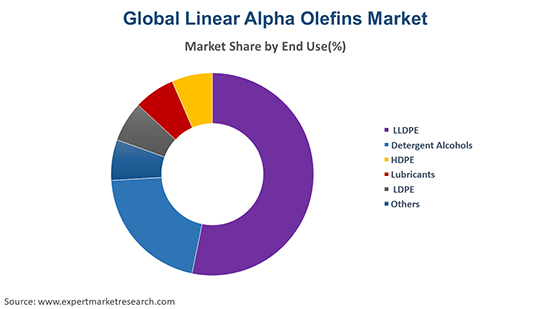 Based on type, the industry is divided into:

Based on end-uses, the industry is segmented into: 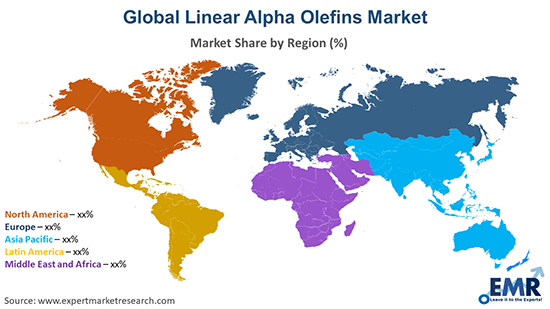 Linear alpha olefins are versatile organic compounds. They are used in a number of industries such as cosmetics and pharmaceuticals, chemical, coatings and paper, automotive and consumer goods. They are used in the manufacture of polymers like polyethylene and polyalphaolefin, synthetic lubricants, detergents alcohols, plasticizer alcohol, etc.

This report provides an exhaustive insight into the manufacturing of linear alpha olefins. Factors such as chemical reactions involved, process flow, raw material requirements, mass balance and various manufacturing steps have been thoroughly discussed in the report. The report also provides a comprehensive market evaluation of the major feedstocks required for manufacturing linear alpha olefin viz. ethylene. For feedstock, the report provides price trends, market breakup by end-use, market breakup by region and its key manufacturers.

The report gives a detailed analysis of the following key players in the global linear alpha olefins market, covering their competitive landscape, capacity, and latest developments like mergers, acquisitions, and investments, expansions of capacity, and plant turnarounds:

What was the global market size in 2020?

The major drivers of the industry, such as the thriving polyethylene industry, rising environmental concern, rising demand from the developing regions, utilisation in diverse applications ranging from waxes and plastic packaging to the high-performing engine and industrial oils, and growing research and development activities, are expected to aid the market growth.

What are the key industry trends of the global linear alpha olefins market?

The key trends guiding the growth of the market include the growing demand for C14 as an on-land drilling fluid base stock owing to its biodegradable nature and rapid technological advancements.

What are the major regional markets of linear alpha olefins, according to the EMR report?

The major regions in the industry are North America, Latin America, the Middle East and Africa, Europe, and the Asia Pacific, with North America accounting for the largest market share.

What is the leading end use sector of linear alpha olefins?

The end use segment in the industry is led by LLDPE.

The major players in the industry are Shell International B.V., Ineos AG, and Exxon Mobil Corporation, among others.

The global linear alpha olefins market attained a value of USD 9.2 billion in 2020, driven by the growing demand for polyethylene, particularly LLDPE. Aided by technological advancements and the growing demand for biodegradable on-land drilling fluid base stock, the market is expected to witness a further growth in the forecast period of 2022-2027, growing at a CAGR of 4.6%. The linear alpha olefins market is projected to reach USD 12 billion by 2026.

EMR’s meticulous research methodology delves deep into the market, covering the macro and micro aspects of the industry. Based on its types, the industry can be segmented into butene, hexene, octene, decene, dodecene, tetradecene, hexadecene, octadecene, and eicosane, among others. On the basis of end use, the LLDPE sector accounts for the leading share in the industry. The major regional markets for the product are North America, Europe, the Asia Pacific, Latin America, and the Middle East and Africa, with North America accounting for the largest share of the market. The key players in the above market include Shell International B.V., Ineos AG, and Exxon Mobil Corporation, among others.