Global Liquid Nitrogen Market to Grow at a CAGR of 4% During 2021-2026, Aided by the Rising Demand in Chemical and Pharmaceutical Industries

The global liquid nitrogen market is expected to grow at a CAGR of 4% in the forecast period of 2023-2028. 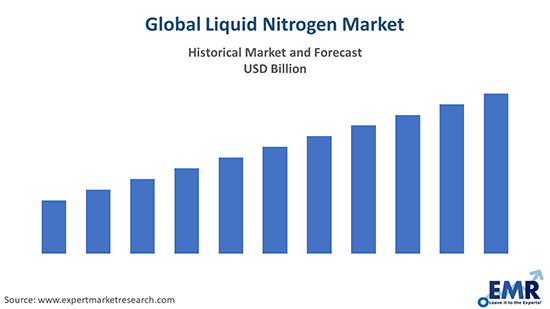 Another important end use sector of liquid nitrogen was rubber and plastics, as liquid nitrogen in rubber production is used as a refrigerant in deflashing systems. Because of its ultracool temperature, it reduces the need for pre-cooling and can rapidly lower the flash temperature, thus, lowering cycle times and improving transportability. In addition, ultracold, inert nitrogen can help minimise the generation of heat during the grinding process, resulting in high-quality, very thin, uniformly shaped particles. This is expected to further propel the industry forward.

Nitrogen in a liquid state is referred to as liquid nitrogen. Liquid nitrogen is used for cryopreservation, cryosurgery, and cryo medicine since it allows supercooling down to approximately -200°C. Due to its favourable properties, liquid nitrogen is invaluable for storing blood and bone marrow cells, sperm, ova, early embryos, and a host of microorganisms in the microbiology laboratory (bacteria, fungi, and others). A super-chilled scalpel can be used to cut cancer tissue during cryosurgery. Liquid nitrogen is widely used in dermatology to freeze healthy growths, precancers, and skin cancers. 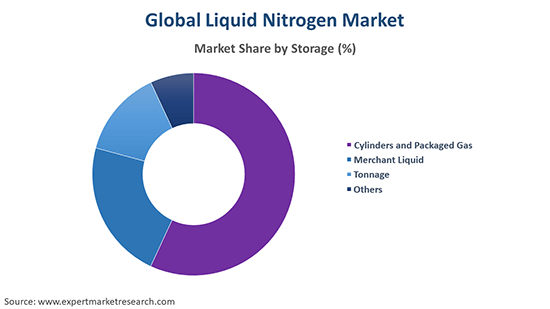 By function, the market is bifurcated into:

Based on technology, the market is bifurcated into:

On the basis of storage, the market is divided into:

The market is divided based on end use into:

The regional markets for liquid nitrogen can be divided into North America, Europe, the Asia Pacific, Latin America, and the Middle East and Africa. 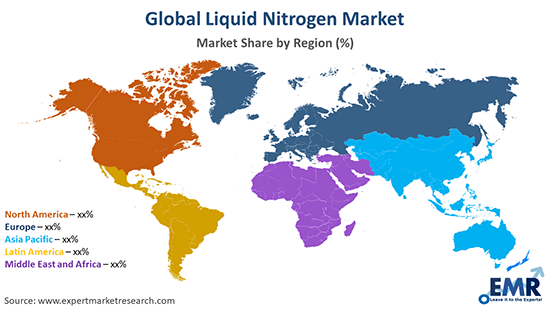 The increasing demand for liquid nitrogen to function as a coolant in a variety of end-use industries, including metal processing and construction, chemical and pharmaceuticals, and healthcare, among others is driving the growth of the market. The rising demand for cylinders and packaged gas has further contributed to the growth of the market. During the forecast period, tonnage delivery and merchant liquid distribution verticals of the storage segment are expected to be the major distribution modes of the product.

Over the projected era, the healthcare industry is expected to witness a robust growth and rapid technological advancements. The increasing use of mobile technologies in the healthcare sector is expected to further propel the market growth. Furthermore, the steady growth of the automotive industry and the increased car production around the world are anticipated to further boost the liquid nitrogen industry expansion.

The report gives a detailed analysis of the following key players in the global liquid nitrogen market, covering their competitive landscape, capacity, and latest developments like mergers, acquisitions, and investments, expansions of capacity, and plant turnarounds:

What is the growth rate of the liquid nitrogen market?

The major drivers of the market include rising industrialisation, technological advances, growth in automotive industry, and rise in disposable income.

What are the key industry trends of the global liquid nitrogen market?

The increasing demand for coolant in healthcare industryis a key industry trend aiding the market growth.

What are the major regional markets of liquid nitrogen, according to the EMR report?

What are the leading functions of liquid nitrogen in the industry?

Coolant and refrigerant are the leading functions in the industry.

What are the leading technologies of liquid nitrogen in the industry?

Cryogenic distillation and pressure swing adsorption are the leading technologies in the industry.

What are the leading storages of liquid nitrogen in the industry?

Cylinders and packaged gas, merchant liquid, and tonnage, among others are the leading end uses in the industry.

What are the leading end-uses of liquid nitrogen in the industry?

Chemical and pharmaceutical, healthcare, food and beverage, metal manufacturing, construction, and rubber and plastic, among others are the leading end-uses in the industry.

The global liquid nitrogen market is driven by increasing demand for coolant in healthcare industry.  The market is expected to witness further growth in the forecast period of 2023-2028, growing at a CAGR of 4%.

EMR’s meticulous research methodology delves deep into the market, covering the macro and micro aspects of the industry. Based on its functions, the liquid nitrogen industry can be segmented into coolant and refrigerant. Based on technologies, the liquid nitrogen industry can be segmented into cryogenic distillation and pressure swing adsorption. Based on its storages, the liquid nitrogen industry can be segmented into cylinders and packaged gas, merchant liquid, and tonnage, among others. On the basis of end-uses, the market is divided into chemical and pharmaceutical, healthcare, food and beverage, metal manufacturing, construction, rubber and plastic, among others. The major regional markets for liquid nitrogen are North America, Europe, the Asia Pacific, Latin America, and the Middle East and Africa. The key players in the above market include Linde plc, Air Products Inc., Praxair Technology, Inc, Taiyo Nippon Sanso Corporation, and Southern Industrial Gas Sdn Bhd, among others.