Global Methyl Isobutyl Ketone Market to Grow at a CAGR of 3% During the Forecast Period of 2021-2026. 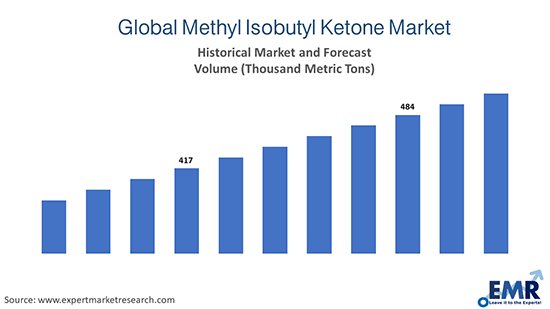 The demand for methyl isobutyl ketone is being driven by the growing paints and coating sector and the automobile industry, especially in countries like Brazil, Eastern Europe, and some Asian countries. The major supply markets for the product include the Asia Pacific, accounting for almost 55% of the market share. The developing economies of the region are also propelling the industry growth. The market in the Asia Pacific is being supported by the healthy growth of the construction and automobile industries. Western Europe and North America are also significant supply markets. The demand from the surfactant, as well as the solvent extraction market, is also likely to grow in the coming years. Kumho P&B Chemicals., Inc., one of the key players, is the leading producer of methyl isobutyl ketone in Asia and the largest manufacturer of the organic compound in the world.

South Africa is a major exporting region, exporting large volumes of the product to countries like the United States, Singapore, and Europe, among others. The dominant producer in South Africa is Sasol Limited, accounting for a significant share of the output. The Asia Pacific region is also among the major producers with enough production to meet its regional demand. The region is still compelled to import the product to meet more than 10% of the regional demand due to changing preferences of the producers to produce alternative products to gain higher profit. North America is also an importing region, which relies on imports from South Africa to meet nearly 20% of its regional demand.

Methyl isobutyl ketone, which is abbreviated as MIBK, refers to an organic compound, which is a colourless fluid. It is a ketone, having the chemical formula (CH3)2CHCH2C(O)CH3, which is often used as a solvent for resins, oils, varnishes, gums, lacquers, and nitrocellulose. 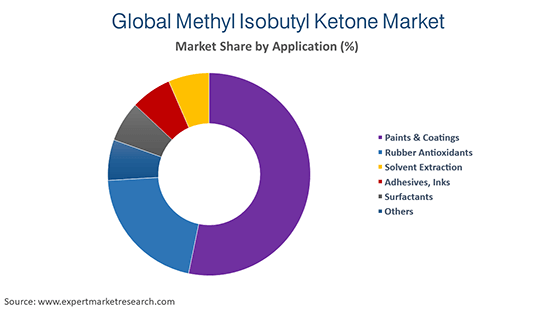 The EMR report also covers the regional markets like North America, Europe, the Asia Pacific, Latin America, and the Middle East and Africa. The report also explores the feedstock market, namely, acetone, covering the price trends and applications of acetone for the historical (2017-2021) and forecast (2022-2027) periods. 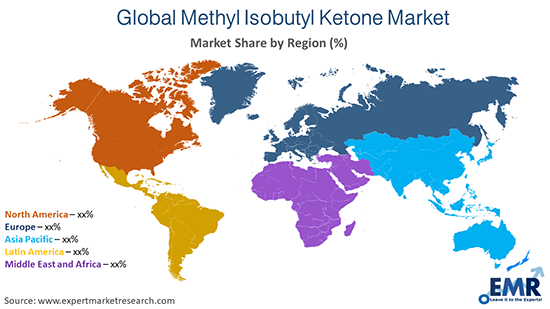 The global methyl isobutyl ketone market is being driven by the growing demand from the paints and coatings industry, which is propelled forward by the recovering construction industry. The demand for the product is particularly increasing faster in developing regions like India and China. The rising demand for paints and coatings in the developing regions is fuelled by the rapidly growing construction sector in the area. The construction sector is the end-use industry for the product and is supported by the growing population in the Asia Pacific region. The increasing population, especially the middle-class population, is demanding more housing facilities, thus, propelling the growth of the construction and methyl isobutyl ketone industries. The rising disposable income of the consumers is also driving the market growth for the product. The growing infrastructure and construction industries in the other regions are also supporting the industry growth of the product. The market is also being aided by the automobile industry, which is booming in nearly all regions. The application of methyl isobutyl ketone in automobiles coating is also providing a push to the overall market growth.

The market demand is also being aided by the growing rubber antioxidant market, which is also growing due to the increasing demand. The increasing demand for cheaper solvents in the solvent extraction and surfactants market is providing further impetus to the methyl isobutyl ketone market growth. Methyl isobutyl ketone is majorly manufactured with the help of acetone, which aids in producing nearly 60% of the total output.

In the coming years, restrictive regulations in regions like Europe might hinder the growth of the market. The industry might also be affected by the moderate demand growth from major regional markets.

The report gives a detailed analysis of the following key players in the global methyl isobutyl ketone market, covering their competitive landscape, capacity, and latest developments like mergers, acquisitions, and investments, expansions of capacity, and plant turnarounds:

The comprehensive EMR report provides an in-depth assessment of the industry based on Porter’s five forces model, along with giving a SWOT analysis. The report also provides the price and trade data analysis of the market.

EMR’s meticulous research methodology delves deep into the market, covering the macro and micro aspects of the industry. Based on application, the market can be divided into paints and coatings, rubber antioxidants, solvent extraction, adhesives and inks, and surfactants, among others. North America, Latin America, Europe, the Middle East and Africa, Europe, and the Asia Pacific are the major regions in the market, with the Asia Pacific accounting for the largest market share of nearly 55%. The major players in the above industry include Kumho P&B Chemicals., Inc., Royal Dutch Shell plc, Celanese Corporation, LCY Group, Mitsui Chemicals, Inc., Solvay S.A., and Sasol Limited, among others.

The major drivers of the industry such as rising disposable incomes, increasing population, rising urbanisation, growing construction and automobile industries, and rising rubber antioxidant industry are driving the growth of the market globally. EMR’s research methodology uses a combination of cutting-edge analytical tools and the expertise of their highly accomplished team, thus, providing their customers with industry insights that are accurate, actionable, and help them remain ahead of their competition.