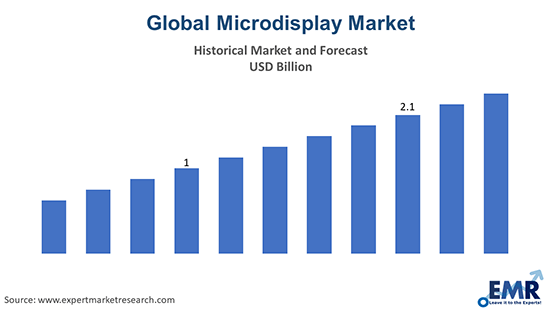 North America is the leading region in the global microdisplay market. The growing use of ICT technology in the education industry is changing conventional classroom teaching, which, in effect, is boosting the regional market growth. High spending on the military by the United States government is contributing to increased spending on microdisplay technologies, like night vision HUDs and thermal imaging.

The Asia Pacific is projected to see the highest growth rate in the forecast period. The involvement of leading market players including Sony Corporation, LG Electronics Inc., and Toshiba Corporation is expected to fuel the market development in the Asia Pacific in the coming years.

Microdisplays are small screen having micro-level resolution as well as a horizontal panel size of less than two inches. These displays achieve lower production costs and power dissipation, produce large images from a compact and lightweight device and can also incorporate display chip drivers. OLED-on-silicon technology has been introduced by manufacturers in recent years, offering enhanced image quality through high-resolution, bi-directional, and ultra-low-power microdisplays. OLED microdisplays have also attracted enormous popularity with the growing use of technology in augmented reality (AR) and virtual reality (VR) applications. 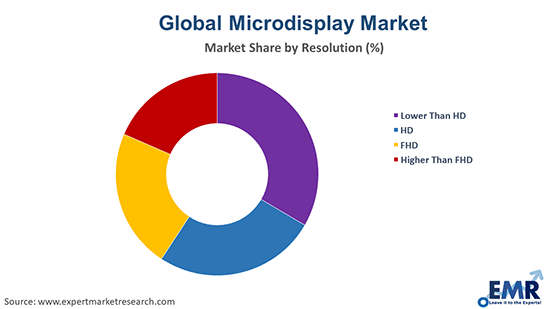 Based on product, the market can be divided into following:

The market breakup on the basis of technology can be as follows:

The resolution of the microdisplay can be categorised as follows:

On the basis of brightness, the industry can be segmented into:

Based on end-uses, the market is divided into the following:

The regional markets for microdisplay include North America, Europe, the Asia Pacific, Latin America, and the Middle East and Africa. 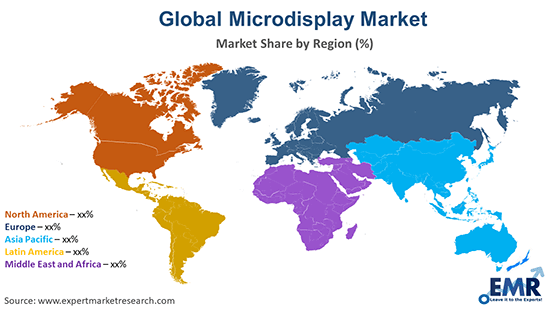 Microdisplay provides various features over direct-view screens, like CRTs and flat-panel LCDs. As a result, they are integrated into a wide variety of consumer products, including modern 3G wireless networking devices, digital camera systems, wireless DVD players, and wearable PCs. In addition, microdisplay is used in a variety of industries, ranging from military and defence to industrial to medical and educational. In military applications, for example, aircraft OEMs and military aviation regulators are proposing the implementation of head-up displays (HUDs) in military aircraft to avoid crash accidents. In addition, major companies are investing in research and development (R&D) in the production of next generation microdisplays with advanced technologies including optical waveguides as well as micro-electromechanical laser scanning (MEMS) systems.

The report gives a detailed analysis of the following key players in the microdisplay market, covering their competitive landscape, capacity, and latest developments like mergers, acquisitions, and investments, expansions of capacity, and plant turnarounds:

What was the global microdisplay market size in 2020?

In 2020, the global microdisplay market attained a value of nearly USD 1.12 billion.

The major drivers of the industry, such as the increased adoption of ICT technology in the educational sector, growing government investment in the defence and military sector, growing demand for consumer products such as digital camera systems, wireless DVD players and others, and growing technological advancements, are expected to aid the market growth.

What are the key industry trends of the global microdisplay market?

The key market trends guiding the growth of the microdisplay market include the launch of next generation microdisplays with technologies like optical waveguides and micro-electromechanical laser scanning (MEMS) systems and increased investments by the key players in the R&D activities.

What are the major regional markets of microdisplay, according to the EMR report?

What are the major product types of microdisplay in the industry?

Near-to-eye (NTE) devices, head-up display (HUD), and projector, among others are the major product types in the industry.

What are the major technologies in the industry?

What are the significant resolutions of the product?

Lower than HD, HD, FHD, and higher than FHD are the significant resolution types of the product.

What are the major segments based on brightness of the product?

What are the significant end use sectors of the product?

Consumer, industrial and enterprise, automotive, military, defence and aerospace, sports and entertainment, retail and hospitality, medical, and education are the significant end use sectors of the product.

The global microdisplay market attained a value of USD 1.12 billion in 2020, driven by the growing integration of these displays into consumer products and rapid technological advancements. Aided by the development of next generation microdisplays, the market is expected to witness a further growth in the forecast period of 2023-2028, growing at a CAGR of 20%. The microdisplay market is projected to reach USD 3.3 billion by 2026.

EMR’s meticulous research methodology delves deep into the market, covering the macro and micro aspects of the industry. Based on its product types, the microdisplay industry can be segmented into near-to-eye (NTE) devices, head-up display (HUD), and projector, among others. On the basis of technologies, the industry is divided into liquid crystal display (LCD), liquid crystal on silicon (LCOS), organic light-emitting diode (OLED), and digital light processing (DLP). On the basis of resolution, the industry is segmented into lower than HD, HD, FHD, and higher than FHD. Based on brightness, the industry is categorised into less than 500 nits, 500–1,000 nits, and more than 1,000 nits.    Based on end use sectors, the industry is divided into consumer, industrial and enterprise, automotive, military, defence and aerospace, sports and entertainment, retail and hospitality, medical, and education, among others. The major regional markets for microdisplay are North America, Europe, the Asia Pacific, Latin America, and the Middle East and Africa, with North America accounting for the largest share of the market. The key players in the above market include Kopin Corporation, Himax Technologies, Inc., eMagin, Inc., Sony Semiconductor Solutions Corporation, Jasper Display Corp., and Seiko Epson Corporation, among others.