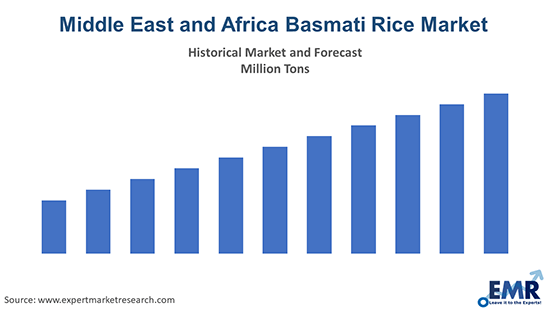 The Middle East is a leading consumer of basmati rice, globally. The region accounts for 37.8% of the total rice consumption. Since the production in the region far exceeds the demand for the basmati variety of the paddy crop, the Middle East is a net importer of the grain. It primarily imports the grain from India and Pakistan. Iran was the leading importer of basmati rice from India. The country accounted for over a fifth of India’s imports of the paddy crop in 2018. The GCC countries are the major importers of basmati rice in the Middle East. In 2018, Saudi Arabi and the United Arab Emirates, together, accounted for 30% of the exports of the rice variety from India.

Globally, basmati rice represents 2.1% of the total rice output. The global rice production attained nearly 500 million metric tons. Developing countries are the largest consumers of rice. The Asia Pacific, particularly, is a major producer and consumer of the paddy crop. Asia accounted for 84% of the total rice consumption, globally. However, the Sub-Saharan African countries are projected to witness the fastest growth in rice consumption in the coming years. The consumption in the region is expected to grow by 22% by 2026. While the rice production in Africa has increased by nearly 38% over the last decade, the domestic demand for the grain far exceeds the current production levels. The region depends on imports, primarily from Asia, to meet its rising demand. While China is the largest rice producer, India is the leading producer of basmati rice, representing 70% of its global output. In Africa, Algeria, Somalia, and Kenya are the major importers of basmati rice.

Rice is a cereal grain derived from the seed of Oryza sativa or Oryza glaberrima grass species. It is one of the major staple food, globally. It can be broadly bifurcated into basmati and non-basmati types. The basmati type is aromatic and has a slender, long grain. It originated from the Indian subcontinent and is widely consumed in India and other South Asian countries. It can be cooked plain or as a savoury dish. It can also be served with other accompaniments. It can be divided into: 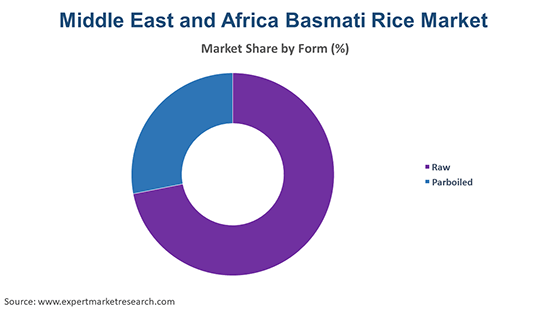 The report looks into the various regional markets in the Middle East like Iran, Saudi Arabia, UAE, Iraq, and Kuwait, among others. 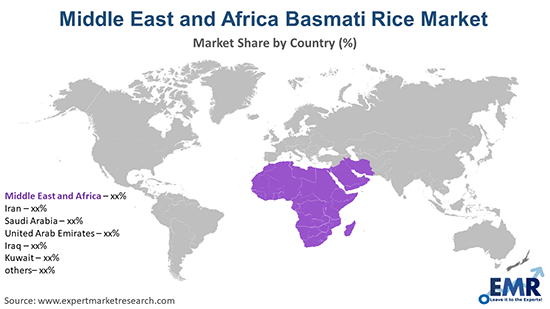 The Middle East and Africa basmati rice market is being driven by the rising consumption of basmati rise. The increasing imports of the rice variety in the region are providing further impetus for the growth of the overall global market. The industry is also aided by the superior taste and quality of the grain variety. It is also being further propelled forward due to the rising demand for basmati rice as it is an integral part of various Middle Eastern cuisines. The rice variety is used to prepare rich dishes made of multiple layers of dried fruits, meats, and rice. It forms a part of the staple diet of the population in the Middle East and Africa. Rice, overall, is one of the most essential food crops in Africa.

The rapid growth in the population of the region is acting as a catalyst for the industry growth. Iran, one of the leading import markets for basmati rice, is also one of the most populous countries in the region. The country is also witnessing a steady rise in its urban population, which grew at an annual rate of 1.83% in 2017. The urban population has also been growing in other significant markets in the Middle East, like Saudi Arabia and the United Arab Emirates. Almost 93% of the population in the UAE live in urban areas. The rising urban population and rise in disposable income in the area will drive the basmati rice industry in the coming years. Being low in fat content and with additional nutritional value, the rice variety is being preferred in the region due to the increasing cases of obesity and a rise in health consciousness.

The report provides a detailed analysis of the key players in the Middle East and Africa basmati rice market, looking into their capacity, market share, and latest developments like expansions of capacity, plant turnarounds, and mergers, investments, and acquisitions:

The comprehensive report looks in-depth into the micro and macro aspects of the industry. The report by EMR assesses the market based on Porter’s Five Forces model along with providing a SWOT analysis. It also gives an overview of the other regional markets like the Asia Pacific, North America, Latin America, and Europe.

What are the major regional markets of the Middle East and Africa basmati rice, according to the EMR report?

The major regions in the industry are Iran, Saudi Arabia, UAE, Iraq, and Kuwait, among others.

What are the major industry drivers in the Middle East and Africa basmati rice market?

The major drivers of the market include the global increase in the number of rice consumers, thriving food industry, rising disposable incomes, and growing awareness about high nutritional value of rice.

What are the key industry trends of the Middle East and Africa basmati rice market?

The emerging e-commerce industry in the region owing to the growing expansion of major online-retail giants and increasing imports of the rice variety are the  key trends guiding the growth of the industry.

What are the major forms of product included in the market?

Raw and parboiled are the major forms of product included in the market.

The Middle East and Africa basmati rice market is driven by the thriving food and beverage industry. Aided by the growing trend of veganism and increasing imports of the rice variety, the market is expected to witness a healthy growth in the forecast period of 2023-2028.

EMR’s meticulous research methodology delves deep into the market, covering the macro and micro aspects of the industry. Based on form, the market is divided into raw and parboiled. The major regional markets for Middle East and Africa basmati rice market are Iran, Saudi Arabia, UAE, Iraq, and Kuwait, among others. The key players in the above market include Adani Group, Supple Tek industries Pvt ltd., L.T. Food Limited, Kohinoor foods Ltd, Saif International Limited, among others.