The global mono ammonium phosphate market reached a volume of 25.50 million metric tons in 2020. The market is further expected to grow in the forecast period of 2021-2026, growing at a CAGR of 2%. The industry is projected to reach 28.72 million metric tons by 2026. 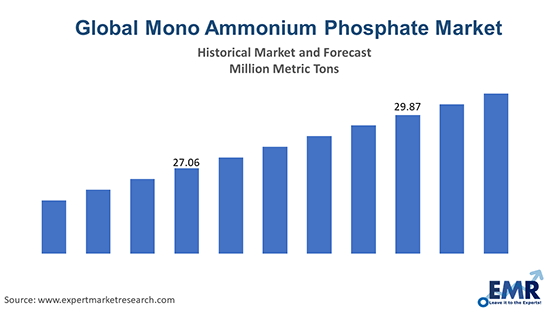 Mono ammonium phosphate (MAP) is derived by the reaction of ammonia (NH3) and phosphoric acid (H3PO4) and finds extensive use as a source of nitrogen (N) and phosphorus (P). It finds its applications in the following sectors: 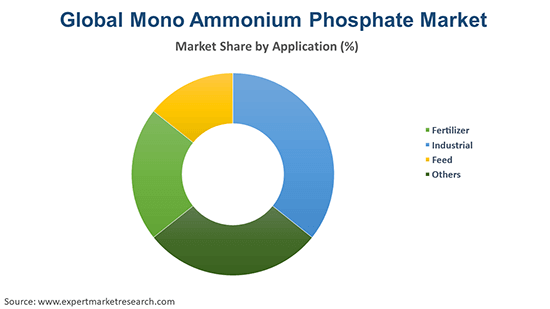 While its feedstock, ammonia, finds its applications in fertilizers, refrigerants, pharmaceuticals, and textiles, among others, phosphoric acid is used in fertilizer, industrial, and feed sectors, among others. The report looks into the regional market for MAP like the Asia Pacific, Europe, the Middle East and Africa, Latin America, and North America. 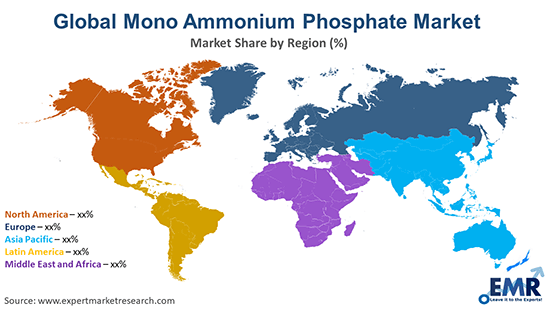 The rising global population combined with the growing urbanisation is expected to support the growth of the global mono ammonium phosphate market. MAP is also finding growing application in the food sector where it is used as an emulsifier and in fermentation applications. Thus, the rising use of MAP in cheese starter cultures, beer and wine, distilled spirits, yeast, and bread is further aiding the industry growth. The Asia Pacific regions like India, China, and South East Asian countries are expected to drive the demand for mono ammonium phosphate in the coming years. China is also one of the leading exporters of MAP, along with Russia, the United States of America, and Morocco, with Brazil being a significant importer of the substance.

The report gives a detailed analysis of the following key players in the global mono ammonium phosphate market, covering their competitive landscape, capacity, and latest developments like mergers, acquisitions, and investments, expansions of capacity, and plant turnarounds:

What was the global mono ammonium phosphate market size in 2020?

The market is estimated to reach a volume of about 28.72 million metric tons by 2026.

The increasing use of MAP in cheese starter cultures, beer and wine, distilled spirits, yeast, and bread is expected to be a key trend guiding the growth of the industry.

What are the major regional markets of mono ammonium phosphate, according to the EMR report?

What are the major application sectors for the product?

The product finds application in fertilizer, industrial, and feed, among others.

The global mono ammonium phosphate market attained a volume of 25.50 million metric tons in 2020, driven by the growing practice of precision farming. Aided by the rising demand from the animal feed sectors, the industry is expected to witness a further growth in the forecast period of 2021-2026, growing at a CAGR of 2%. The industry is projected to reach 28.72 million metric tons by 2026.

EMR’s meticulous research methodology delves deep into the industry, covering the macro and micro aspects of the industry. Based on its applications, the market can be segmented into fertilizer, industrial, and feed, among others. The major regional markets for mono ammonium phosphate are North America, Europe, the Asia Pacific, Latin America, and the Middle East and Africa. The key players in the above industry include Haifa Group, CL Group, Nutrien’s Crop., Prayon S.A., Sichuan Blue Sword Chemical (Group) Co.,Ltd, and Wuhan Waking Lion Chemicals Co., Ltd, among others.

The global chelate fertiliser market is expected to grow at a CAGR of about 6.5% in the forecast period of 2021-2026.
Read More

The global acaricides market is driven by the rising global population and the demand for higher agricultural yield. Aided by the increasing demand for organic products and sustainable agriculture, th...
Read More