Global Native Starch Market to be aided by the Expected Growth in the Global Starch Market at a CAGR of 4.4% in the forecast period of 2022-2027 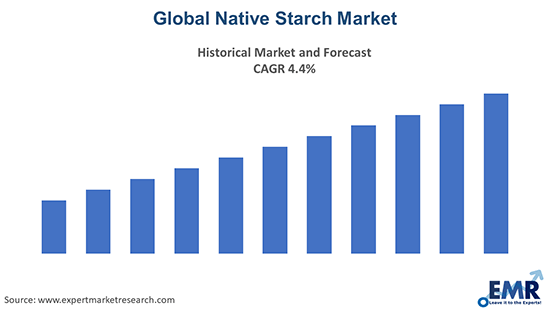 Native starch accounts for over 35% of starch production while over half of the starch output is used as sweeteners, and more than 10% goes into the production of modified starch. Native starch is produced on a large scale and finds widespread applications. The common feedstock of the substance are maize, cassava, wheat, and potato, and the industry is dependent on the climate of these feedstock. Maize, a major feedstock, is constituted of nearly 72% starch. In 2017, almost 1044.6 million tonnes of corn was produced globally. The US is the leading corn-producing nation accounting for more than 35% of the global corn output. Globally, almost 745 million tonnes of wheat was produced with the EU, the Russian Federation, China, and Australia accounting for most of its production. China and India, on the other hand, were the major producers of potato. The global potato production in 2017 was estimated to be 389 million tonnes. The production of cassava, another major feedstock, was mainly concentrated within the continent of Africa where it is primarily consumed as a food. In 2017, the total cassava output, globally, stood at 275 million tons.

The United States is the leading market for native starch, with the majority of its production occurring within the country. The US is followed by the Asia Pacific and Europe as significant markets in the industry. EU’s starch output saw a hike from 8.7 million tonnes in 2004 to 11 million tonnes in 2017. Nearly 9.4 million tonnes of starch and its derivatives are consumed within the EU with its native type accounting for over a quarter of the consumption followed by modified starches.

Native starch is a carbohydrate ingredient derived from sources like wheat, cassava, potato, maize, high amylose maize, and waxy maize. It is used extensively as a texturizing and thickening agent in food and feed industries. Its application sectors can be broadly categorised as: 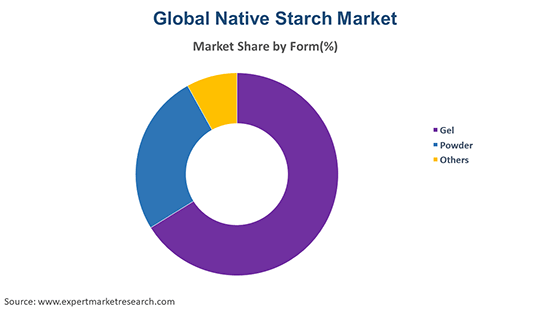 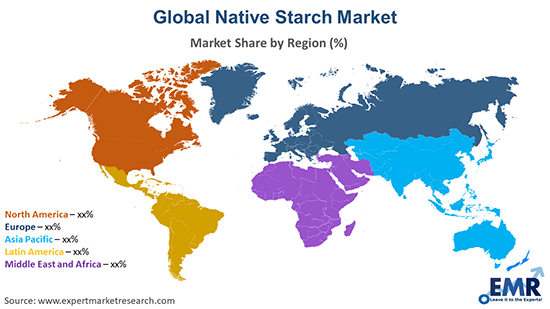 The global native starch market is being aided by its extensive application in both food and non-food sectors. In the food sector, it is used as a thickening agent, texture enhancer, dough binding agent, stabiliser, and as a moisture controller, among other properties.  The growing population and a rising middle class are also expected to drive the global native starch growth.  Due to busier lifestyles and an increase in disposable incomes, people are increasingly seeking out instant and convenient food products. This is providing further impetus to the native starch industry as it is used in processed products such as dry mix soups, salad dressings, processed meats, spreads, and pudding powders, among others.

The industry is being driven by native starch’s expanding application in the textile industry. It is used as finishing agents, colour thickeners, and sizing agents. Paper and adhesive industry are the growing application sectors aiding the native starch market.  With the consumers and manufacturers becoming more environmentally conscious, corn and potato starch are finding application as substitutes to traditional plastics, and are known as organic bioplastics. These organic bioplastics are used to manufacture disposable plates and cutlery and can be fully decomposed in three months.

March 2020- Ingredion has expanded its capacity for higher-value speciality ingredients through its acquisition of Western Polymer.

February 2020- Cargill, the US-based food to retail company, will invest USD 22.7 million in its Sas Van Gent starch production facility in the Netherlands.

The report provides a detailed analysis of the following key players in the global native starch market, covering their market share, capacity, and latest developments like mergers, acquisitions, and investments, plant turnarounds, and expansions of capacity:

The EMR report provides an in-depth insight into the manufacturing process as well as analysing the value chain of the global native starch market. The report also gives a SWOT analysis along with an analysis of Porter’s Five Forces.

The global native starch market is majorly being driven by the growing starch market, which attained a volume of nearly 92.91 million metric tons in 2020.

The market is projected to be driven by the global starch market, which is likely to grow at a CAGR of 4.4% in the forecast period of 2023-2028.

The major drivers of the industry include rising disposable incomes, increasing population, rising starch market, growing use in both food and non-food sectors, and the rising application in textile, paper, and adhesive industry.

The rising consciousness among the consumers regarding the environment is expected to be a key trend guiding the growth of the industry.

What are the leading sources of native starch in the market?

The leading sources of native starch in the market are corn, wheat, potato, cassava, and rice, among others.

What are the major types of native starch in the industry?

The major types of native starch in the industry are corn starch, wheat starch, potato starch, cassava starch, and rice starch, among others.

What are the significant forms of native starch in the market?

The significant forms of native starch in the market are gel and powder, among others.

What are the major application sectors for the industry?

EMR’s meticulous research methodology delves deep into the industry, covering the macro and micro aspects of the industry. Based on source, the market is segmented into corn, wheat, potato, cassava, and rice, among others. By type, the industry is divided into corn starch, wheat starch, potato starch, cassava starch, and rice starch, among others. On the basis of form, the market is segmented into gel and powder, among others. Based on application, the industry is divided into food industry, paper industry, textile industry, pharmaceuticals, and personal care, among others. The major regional markets for native starch are North America, Europe, the Asia Pacific, Latin America, and the Middle East and Africa, with North America accounting for the largest share of the market. The key players in the above industry include Cargill, Incorporated, Tate & Lyle PLC, Ingredion Incorporated, Tereos Starch & Sweeteners s.a.s., Roquette Frères S.A., Royal Avebe, AGRANA Beteiligungs AG, Others.