The United States of America represents an emerging market for the industry, which is currently exhibiting a significant growth. The country's growth is aided by the growing popularity of the Internet of Things (IoT). The United States of America is among the leading markets for IoT technologies, such as IoT endpoints, IoT security, IoT data and analytics, IoT communication, and IoT artificial intelligence. The country is witnessing an increase in the usage of cloud computing services and applications, thereby resulting in the establishment of large hyperscale cloud-based data centres. The rising demand for cloud services in the US is expected to increase the construction of cloud-based data centres. Major companies, such as Amazon Web Services (AWS), Google, and Microsoft, are expanding their investments in data centre construction, which is aiding the growth of the overall industry in North America.

The data centre server refers to devices, physical or virtual, that are used for collecting, storing, processing, organising, and distributing an enormous amount of important data. These servers are used for the mobilisation of data over multiple computer systems and, thus, are called the backbones of data centres, i.e., a centralised location where these servers are generally found. These servers are extensively used across several industries and sectors like banking, financial institutions, healthcare, IT and telecommunication, retail, and government. 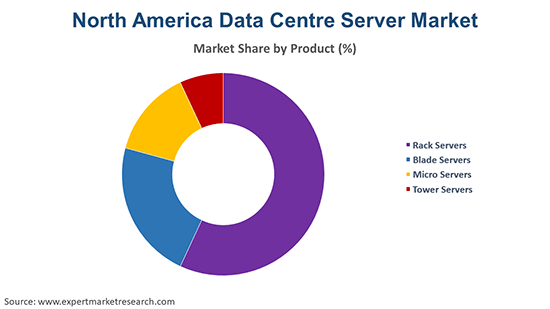 The data centre server industry in North America is divided on the basis of product type into:

Amongst these, rack servers exhibit the leading product type in the market.

On the basis of application, the industry has been bifurcated into:

The report also covers the regional markets of the product in North America like the United States of America and Canada. 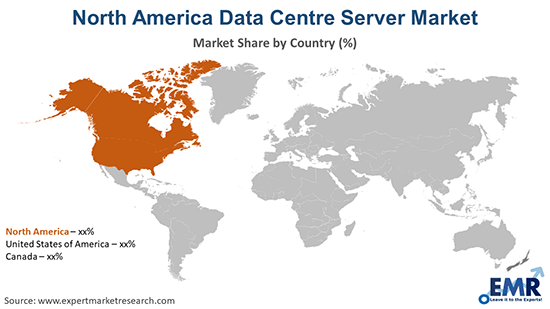 The North America data centre server market is driven by the rapid transfer of huge data sets and the consequent generation of reliable information. Therefore, numerous commercial and industrial enterprises are employing these servers to streamline their operations, further contributing to the industry growth within North America. An increasing number of users are looking forward to the public and private cloud-based solutions, like Amazon's Cloud Drive, Google Drive, and Apple's iCloud, due to the convenience and security extended by these services. Additionally, the rising adoption rate of the Internet of Things (IoT) in varied industries has led to an increase in demand for data centres for analysis and storage at several locations. Another emerging trend in the market is the introduction of energy- and cost-effective micro-servers which small- and medium-sized organization prefers for work with relatively lower computing power.

The report gives a detailed analysis of the following key players in the data centre server market in North America, covering their competitive landscape, capacity, and latest developments like mergers, acquisitions, and investments, expansions of capacity, and plant turnarounds:

What was the North America data centre server market size in 2020?

In 2020, the North America market for data centre server attained a value of USD 16.5 billion.

What are the key industry trends of the North America data centre server market?

The growing adoption of the Internet of Things (IoT) across diverse industries and the introduction energy- and cost-effective micro-servers for small- and medium-sized organizations are the major trends driving the market growth.

What are the major regions of data centre server according to the market report?

What is the dominant product in the industry?

The leading product type in the industry is rack servers.

The most significant application segments in the market are industrial servers and commercial servers.

The major players in the industry are Maysteel Industries LLC., Dell Inc., Fujitsu, and Super Micro Computer, Inc., among others.

The North America data centre server market attained a value of USD 16.5 billion in 2020 driven by the rising adoption of these servers by various enterprise for smooth and secure functioning. Aided by the rising penetration of Internet of Things in the region, the is expected to witness a further growth in the forecast period of 2022-2027, growing at a CAGR of 4.5%. The market is projected to reach USD 21.5 billion by 2026.

EMR’s meticulous research methodology delves deep into the market, covering the macro and micro aspects of the industry. Based on its application segments, the market can be segmented into industrial servers and commercial servers. On the basis of product, rack servers accounted for the largest market share. The major regional markets for data centre server are the United States of America and Canada, with the United States of America accounting for the largest share of the market. The key players in the above market include Maysteel Industries, LLC., Dell Inc., Fujitsu, and Super Micro Computer, Inc., among others.

The global network forensics market attained a value of about USD 2.68 billion in 2021, driven by the digitisation of business operations. Aided by the booming e-commerce industry, the market is expec...
Read More

The global video streaming software market attained a value of more than USD 6.2 billion in 2021, driven by emergence of leading market players. Aided by the growing applications in the education sect...
Read More