North America Holds One of the Largest Market Shares for Polyglycitol

The North American region is emerging as one of the dominating regional markets for polyglycitol. The growth of the regional market can be attributed to the high population base of people suffering from obesity in the United States. The growing awareness about health and fitness in the young generation and increasing fitness training services are contributing to the market growth in North America.

The Asia Pacific is also expected to be one of the largest markets for polyglycitol owing to the large population and increasing economic development, especially in the emerging nations, such as China and India. The growing usage of social media in the region has aroused health consciousness among the population, which is further boosting the market growth.

Polyglycitol is commonly used as a sugar-free sweetener, bulking agent, or a stabiliser. It is produced from maltose syrups, having a composition of 50% maltitol and around 20% sorbitol on dry basis. The calories contained in polyglycitol are estimated to be about three kilocalories in a gram. According to the World Health Organization, polyglycitol is safe for usage as additives. 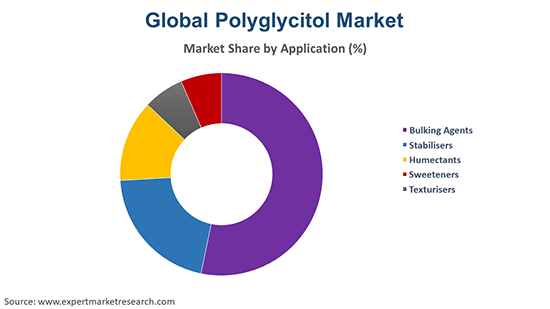 On the basis of product type, the market is segmented into the following segments:

Based on applications, the market is divided into:

The regional markets for polyglycitol can be divided into North America, Europe, the Asia Pacific, Latin America, and the Middle East and Africa. 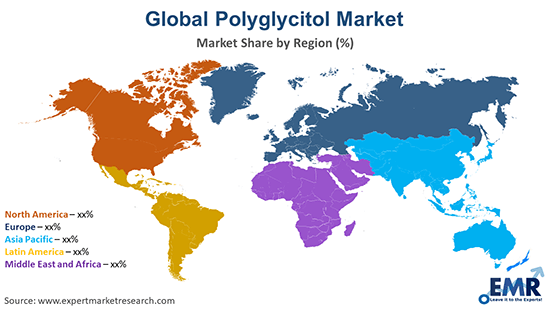 The increasing demand for the sugar-free products worldwide is providing impetus to the growth of the polyglycitol industry. The growing awareness for a healthy lifestyle and a fit body has led to the surge in demand for sugar substitutes like polyglycitol. The widespread awareness via social media has furthered the growth of health consciousness among the younger consumers. This has also catalysed the growth of the polyglycitol industry. The imposition of sugar taxes in some regions and the rising government policies discouraging the high consumption of sugar are expected to propel the growth of the market in the coming years. The market is also expected to be propelled forward by the rising popularity of keto diets as polyglycitol is widely recognised as a keto-sweetener. In the coming years, the growing sugar avoidance among consumers is expected to continue to propel the market growth.

The report gives a detailed analysis of the following key players in the global polyglycitol market, covering their competitive landscape, capacity, and latest developments like mergers, acquisitions, and investments, expansions of capacity, and plant turnarounds:

What was the global polyglycitol market size in 2020?

In 2020, the global polyglycitol market attained a value of nearly USD 16.5 billion.

The major drivers of the market include the widespread awareness via social media, imposition of sugar taxes in some regions, rising government policies discouraging the high consumption of sugar, rising popularity of keto diets, growing sugar avoidance among consumers, high population base of people suffering from obesity, and increasing economic development.

What are the key industry trends of the global polyglycitol market?

The growth of the sugar substitute market and growing awareness for a healthy lifestyle are the key industry trends propelling the market growth.

What are the major regional markets of polyglycitol, according to the EMR report?

What are the several forms of polyglycitol in the market?

On the basis of form, the market is segmented into lumps, powder and syrup.

Based on applications, the market is divided into bulking agents, stabilisers, humectants, sweeteners, and texturisers.

The major players in the industry are Ingredion Incorporated  and Samyang Corporation, among others.

The global polyglycitol market attained a value of nearly USD 16.5 billion in 2020, driven by the growth of the sugar substitute market. Aided by rising government policies discouraging the high consumption of sugar and growing awareness for a healthy lifestyle, the market is expected to witness further growth in the forecast period of 2023-2028, growing at a CAGR of 4.5%.

EMR's meticulous research methodology delves deep into the market, covering the macro and micro aspects of the industry. On the basis of form, the market is segmented into lumps, powder and syrup. Based on applications, the market is divided into bulking agents, stabilisers, humectants, sweeteners, and texturisers. The major regional markets for polyglycitol are North America, Europe, the Asia Pacific, Latin America, and the Middle East and Africa. The major players in the industry are Ingredion Incorporated and Samyang Corporation, among others.