The global red algae market is being aided by the growth of the overall algae products market, which is expected to grow at a CAGR of 4.5% in the forecast period of 2023-2028. 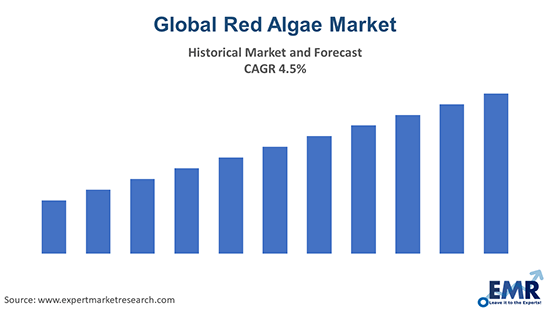 The global red algae industry is being aided by the market growth in Europe and North America. Europe has one of the highest productions and consumptions of red algae, followed by the United States, Japan, Korea, and China. North America, meanwhile, accounts for one of the largest market shares of algae products due to the rise in health-conscious consumers owing to the rising incidences of diseases and conditions, including diabetes and high blood pressure. The high demand for plant-derived protein has also boosted the market for algae products in North America. The Asia Pacific, on the other hand, is projected to have one of the fastest growths in the global demand for algae products in the coming years. The region is expected to see growth due to an increase in population, an increase in the demand for food cultivation, an increase in health awareness, and an increase in disposable incomes.

Red algae or Rhodophyta is a unique type of species that is mainly found in the freshwater lakes, which are the oldest type of eukaryotic algae. It is red due to the presence of a pigment called phycoerythrin, which reflects red light and absorbs blue light. Red algae are high in vitamins, minerals, and antioxidants that are easily used by the human body. The advantages of red algae are that it encourages good circulation in the body, regulates blood sugar levels, and reduces cholesterol levels because it has a high concentration of dietary fibre. It is also a rich source of magnesium and calcium that contributes to bone health. It is also filled with antioxidants that help strengthen the immune system and nourish the skin.

The type of the product can be divided as follows:

The forms of the product include the following:

The regional markets for red algae can be divided into North America, Europe, the Asia Pacific, Latin America, and the Middle East and Africa. 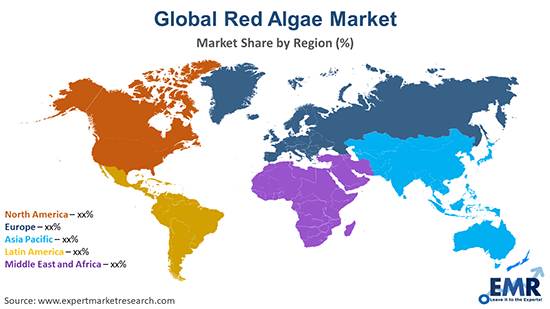 The demand for red algae is rising steadily due to its nutritional and health benefits. Red algae are the most preferred dietary supplement for consumers pursuing weight loss diets, which is, thus, driving the demand, which is also expected to increase in the forecast period. Red algae contain a high amount of protein, fibre, and minerals due to which producers towards the product to be added as an ingredient in a variety of products. In addition, several researchers have established red algae as the largest source of vitamins in the world. It helps to strengthen the immune system by enhancing the role of the leukocytes. It also activates interferon, a protein that protects the body from viruses. Red algae have also been shown to treat urinary tract infections, asthma, skin conditions, digestive disorders, obesity, and high cholesterol levels. Due to all these health benefits, the demand for red algae is projected to rise at a higher level in the forecast period.

The report gives a detailed analysis of the following key players in the global red algae market, covering their competitive landscape, capacity, and latest developments like mergers, acquisitions, and investments, expansions of capacity, and plant turnarounds:

What is the growth rate of the global red algae market?

The global red algae market is being aided by the growing algae products market, which projected to grow at a CAGR of 4.5% between 2021 and 2026.

The growth of the market is being driven by the rising population, growing disposable income, and the rising demand from the healthcare industry.

What are the key industry trends of the global red algae market?

The rising awareness among consumers about the nutritional benefits of the product acts as an important industry trend.

What are the major regional markets of red algae, according to the EMR report?

What are the leading types of red algae in the market?

The leading types of red algae in the market are freshwater red algae, marine red algae, and calcified red algae.

What are the major forms of red algae in the industry?

The major forms of red algae in the industry are powdered and liquid.

The significant application segments in the market are food and beverages, animal feed, pharmaceuticals, and cosmetics and personal care, among others.

The major players in the industry are Cargill, Incorporated, SIMRIS ALG AB, AlgaeCan Biotech Ltd., and Cyanotech Corporation, among others.

EMR’s meticulous research methodology delves deep into the market, covering the macro and micro aspects of the industry. Based on type, the market is segmented into freshwater red algae, marine red algae, and calcified red algae. By form, the industry is bifurcated into powdered and liquid. On the basis of application, the market is divided into food and beverages, animal feed, pharmaceuticals, and cosmetics and personal care, among others. The major regional markets for red algae are North America, Europe, the Asia Pacific, Latin America, and the Middle East and Africa. The key players in the above market include Cargill, Incorporated, SIMRIS ALG AB, AlgaeCan Biotech Ltd., and Cyanotech Corporation, among others.