The global redundant array of independent disks (RAID) market is expected to grow at a CAGR of about 3.5% in the forecast period of 2022-2027. 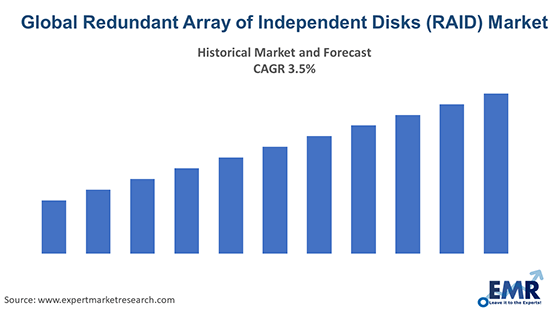 North America is the leading region for RAID owing to the successful management of a wide range of end-user companies and the competitive climate between them. RAID market in the Asia Pacific region is also anticipated to witness substantial growth rate in the future due to the growing demand for data storage by companies in the region. In Europe, the RAID market is rising at a substantial pace due to an increase in business demand and IT needs. The RAID market in Latin America and the Middle East are at a developing level.

RAID (redundant collection of independent discs) is a data storage virtualization technology that incorporates multiple physical disc drive components into a single logical data redundancy, performance enhancement, or often both. RAID uses a disc mirroring or disc stripping technique that involves partitioning the storage space of the drive into units ranging from sector (512 bytes) to several megabytes. RAID provides a gateway to store the same data at different locations on several hard discs, resulting in data mirroring on one or more discs in the same series, so that if one disc fails, the data is stored. By putting data on multiple discs, input/output (I/O) operations provide the ability to read or write to more than one disc at the same time in a balanced way to boost performance. 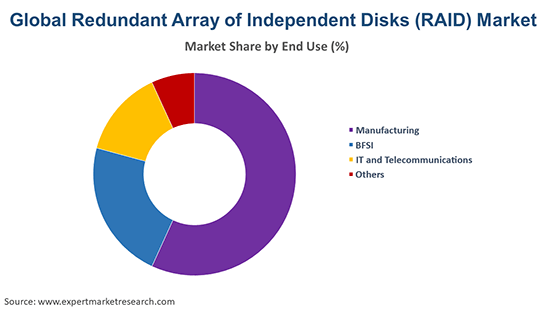 Based on level, the market can be divided as follows:

The types of the product include the following:

It finds end-use in the following sectors:

The regional markets for redundant array of independent disks (RAID) can be divided into North America, Europe, the Asia Pacific, Latin America, and the Middle East and Africa. 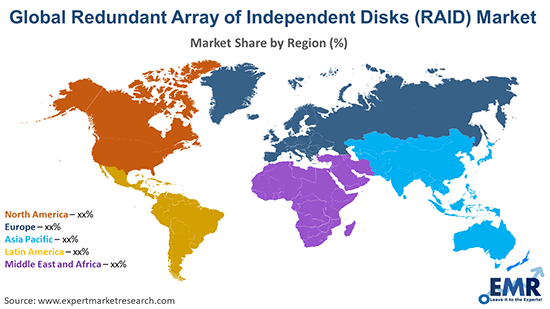 Increasing demand for the storage capacity of digital content and ease of deployment of data storage operations are major factors propelling the growth of the RAID industry. In addition, factors including the availability of data backup in the event of device failure in businesses, low costs involved in data-containing disc mirroring, ensured data reliability are aiding the market growth.

The report gives a detailed analysis of the following key players in the global redundant array of independent disks (RAID) market, covering their competitive landscape, capacity, and latest developments like mergers, acquisitions, and investments, expansions of capacity, and plant turnarounds:

The growth of the market is being driven by factors like rising population, growing urbanisation, the availability of data backup in the case of device failure in businesses, low costs involved in data-containing disc mirroring, ensured data reliability, and the rising demand from the end-use sectors.

What are the key industry trends of the global redundant array of independent disks (RAID) market?

Rise in business and IT demands is an industry trend likely to boost the market growth.

What are the major regional markets of redundant array of independent disks (RAID), according to the EMR report?

What are the various levels for the industry?

What are the types of RAID in the industry?

The types of the product can be divided into hardware and software.

What are the end-use sectors for the industry?

It finds end-uses in manufacturing, BFSI, and IT and telecommunications, among others.

The leading players in the market are Intel Corporation, Lenovo Group Limited, Fujitsu Limited, and Hewlett Packard Enterprise Development LP, among others.

The global redundant array of independent disks (RAID) market attained is expected to grow at a CAGR of 3.5% in the forecast period of 2022-2027 aided by the rapid urbanisation.

EMR’s meticulous research methodology delves deep into the industry, covering the macro and micro aspects of the industry. Based on its levels, the global market for redundant array of independent disks (RAID) can be segmented into RAID 0, RAID 1, RAID 5, RAID 6, and RAID 10, among others. Its type can be divided into hardware and software. On the basis of end-use, the global industry can be divided into manufacturing, BFSI, and IT and telecommunications, among others. The major regional markets for redundant array of independent disks (RAID) are North America, Europe, the Asia Pacific, Latin America, and the Middle East and Africa, with North America accounting for the largest share of the market. The key players in the above industry include Intel Corporation, Lenovo Group Limited, Fujitsu Limited, and Hewlett Packard Enterprise Development LP, among others.

The global drone data services market was driven by the growing applications of drone technology in various sectors in the historical period. Aided by the rising usage of data collected by drones in o...
Read More

The global artificial intelligence in life sciences market was driven by the high demand for AI solutions in the historical period. Aided by the growing investment in technologies and an increase in t...
Read More