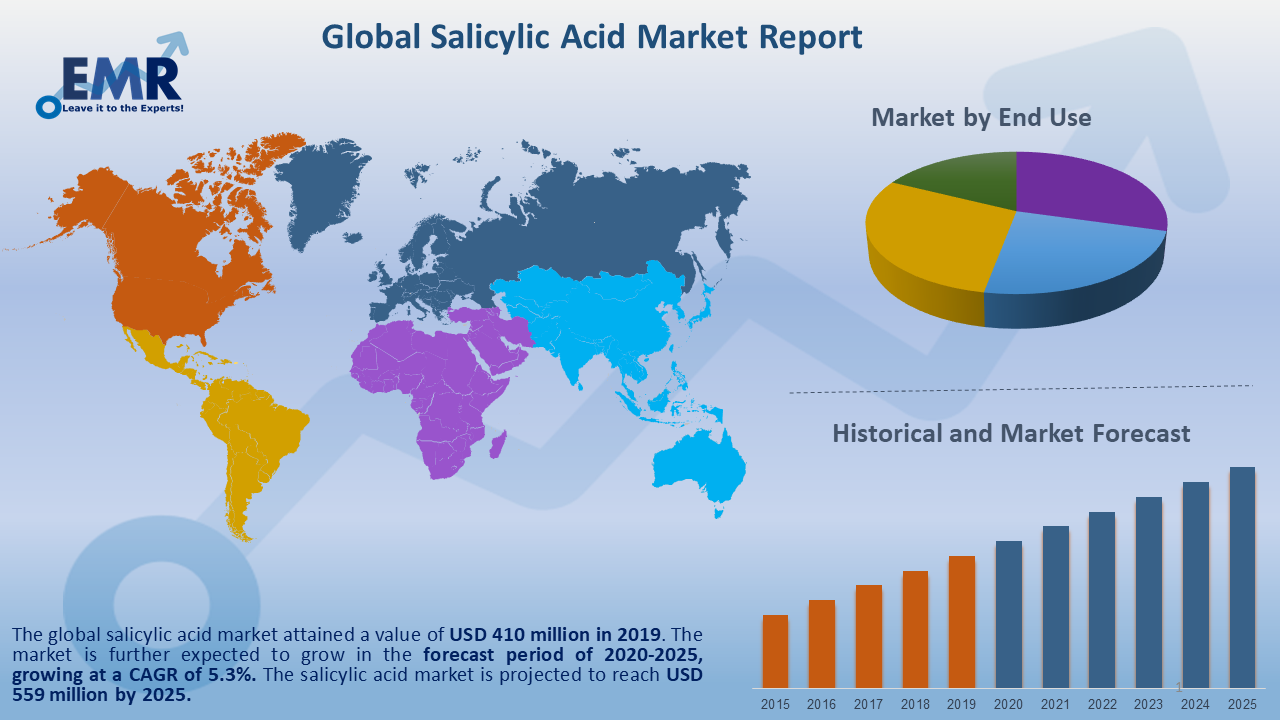 The industry is being driven by the continuous and rising demand from the pharmaceutical sector. Salicylic acid is used as an anti-microbial and anti-inflammatory agent. It also finds uses as a fungicidal. Thus, salicylic acid finds extensive use in the treatment of common skin ailments like acne, blemishes, and psoriasis. Being anti-microbial it also finds applications as an antiseptic and disinfectant. Its anti-inflammatory properties make it an effective pain reliever. With increasing incidences of skin infections and conditions like arthritis, spondylitis, and migraine, the salicylic acid market is expected to witness a healthy growth in the coming years due to the product’s various pharmaceutical properties. The industry is also being aided by the product’s use in the manufacturing of aspirin, one of the most popular drugs in the world. Aspirin, which is used to treat pain, swelling, fever, and other inflammations, is produced by the esterification of salicylic acid and acetic anhydride, with sulphuric acid acting as a catalyst in the process.

North America and Europe are some of the leading salicylic acid markets. The industry in the two regions are being aided by the growth of their pharmaceutical industries. The pharmaceutical market in these regions are being aided by the rising consumer awareness of drugs and increasing consumerization of health due to the increased availability of data. The pharmaceutical industry and, therefore, the salicylic market, in the two regions are also being aided by the growing ageing population in North America and Europe. Europe is expected to be the most aged region globally, with nearly 34% of the population being 60 years or over by 2050. North America, too, is projected to have a large ageing population, with 28% of its population expected to reach 60 years or over by 2050. The growing consumer health care market in North America and Europe is also aiding the salicylic industry in the two regions. The United States of America and Europe are the leading markets for consumer healthcare products due to the two regions’ extensive healthcare apparatus and better access to public and private health insurance.

Salicylic acid can be either obtained naturally from sources like wintergreen leaves and white willow or can be artificially synthesized. Its fungicidal, bacteriostatic, and keratolytic properties find wide application in end-use sectors like:

The report also looks into the regional market of the product like North America, the Asia Pacific, the Middle East and Africa, Europe, and Latin America.

The report gives an in-depth analysis of the following key players in the global salicylic acid market, covering their competitive landscape, capacity, and latest developments like mergers and acquisitions, capacity expansions, and plant turnarounds:

The comprehensive report also gives a SWOT analysis along with an analysis of the Porter’s Five Forces model.

EMR’s meticulous research methodology delves deep into the market, covering the macro and micro aspects of the industry. On the basis of end-use, the industry can be segmented into pharmaceuticals, personal care, and food and preservative, among others. The major regional salicylic acid markets are North America, the Asia Pacific, the Middle East and Africa, Europe, and Latin America, with North America and Europe accounting for the largest shares of the industry. The key players in the above market include Seqens (Novacap), Sigma-Aldrich, Inc, Alta Laboratories Ltd, JM Loveridge Limited, Zhenjiang Gaopeng Pharmaceutical Co., Ltd., Hebei Jingye Group, Siddharth Carbochem Products Ltd, and others.

The major drivers of the market such as rising disposable incomes, increasing population, and growing demand from end use sectors like pharmaceutical, food, and personal care industries are expected to aid the market growth. EMR’s research methodology uses a combination of cutting-edge analytical tools and the expertise of their highly accomplished team, thus, providing their customers with industry insights that are accurate, actionable, and help them remain ahead of their competition.

Hydrogen electrolysers are devices that make use of electric current to offer energy, which splits the water molecule (H2O) and oxygen (O2). Hydrogen gas is produced on the negative side, whereas oxyg...

Flow chemistry is the creation and research of chemical reactions in which the reagents are mixed by pumping fluids, including reagent solutions, through tubes at known rates. The relative proportions...