The global saxagliptin market is expected to grow at a CAGR of 4% in the forecast period of 2023-2028. 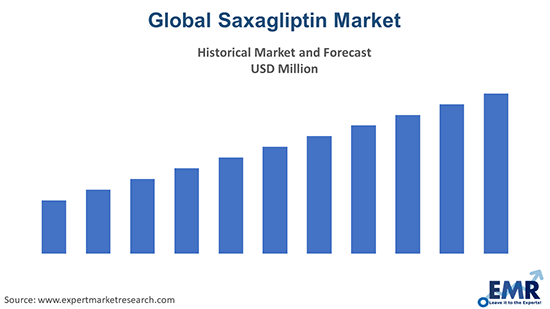 The Asia Pacific Region to Witness a Robust Growth in the Saxagliptin Industry, Owing to Rising Government Funding

The market for saxagliptin is being driven by the rising cases of diabetes across the globe. North America and Europe are the significant markets for saxagliptin globally. This is attributed to a large number of ageing population and the rising prevalence of type II diabetes. The Asia Pacific region is expected to witness a robust growth rate in the forecast period. Countries, especially China and India, are predicted to exhibit a high growth rate of the saxagliptin industry in the Asia Pacific region. Factors such as increasing healthcare expenditure, a large pool of patients, and rising government funding are contributing to the market growth of saxagliptin in the Asia Pacific. 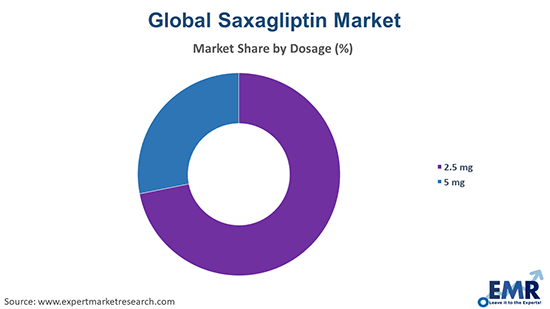 Saxagliptin is the medicine used to treat diabetes. It works by boosting the level of insulin in the body produced after the meal. The product is marketed under the brand name called Onglyza. Saxagliptin acts on a natural hormone in the body, which is called incretins. The product has various side effects such as urinary tract infection, headache, upper respiratory tract infection, and nasopharyngitis. Saxagliptin can also cause complications like stroke and heart attack.

On the basis of dosage, the market is divided into:

Based on distribution channel, the industry can be segmented into:

The market for saxagliptin is being driven by the rising incidences of type II diabetes across the globe. The market drivers, such as increased sedentary lifestyle, rising prevalence of obesity, increased government funding, and junk food habits, are contributing to the market growth of saxagliptin. Further, the rising healthcare awareness is expected to fuel the market growth over the forecast period. The market is expanding due to further innovations taking place in the saxagliptin industry. This is further expected to aid the market growth over the forecast period. However, the market is expected to witness a setback owing to the factors, such as stringent regulations for the approval of drugs and the availability of substitutes for the treatment of diabetes.

The report gives a detailed analysis of the following key players in the global saxagliptin market, covering their competitive landscape, capacity, and latest developments like mergers, acquisitions, and investments, expansions of capacity, and plant turnarounds:

What is the growth rate of the global saxagliptin market?

What are the key industry trends of the global saxagliptin market?

The key trends guiding the growth of the market include the rising innovations and increasing government funding.

What are the major regional markets of saxagliptin, according to the EMR report?

What are the leading dosages of saxagliptin in the market?

The leading dosages of saxagliptin in the market are 2.5 mg and 5 mg, among others.

The major distribution channels in the industry are hospital pharmacy and retail pharmacy, among others.

The major players in the industry are AstraZeneca plc. and Wellona Pharma, among others.

The global saxagliptin market is being driven by the rising prevalence of diabetes. Aided by the rising innovations in the industry, the market is expected to witness a moderate growth in the forecast period of 2023-2028, growing at a CAGR of 4%.

EMR’s meticulous research methodology delves deep into the market, covering the macro and micro aspects of the industry. Based on dosage, the market is segmented into 2.5 mg and 5 mg, among others. On the basis of distribution channel, the industry is divided into hospital pharmacy and retail pharmacy, among others. The major regional markets for saxagliptin are North America, Europe, the Asia Pacific, Latin America, and the Middle East and Africa. The key players in the above market include AstraZeneca plc. and Wellona Pharma, among others.