Sodium chloride represents a white crystalline solid with the chemical formula NaCl. It is commonly referred to as salt, table salt or common salt. It is white in colour, crystalline in appearance, saline in taste and soluble in water. Sodium chloride finds various end-uses in various sectors such as food, medical, industrial and chemical. Some of its applications include de-icing, water softening and manufacturing of various chemicals (like caustic soda, sodium chlorite, ammonium chlorite and sodium bicarbonate). During 2015-2019, the global sodium chloride market grew at a CAGR of around 6%. The consumption of sodium chloride is primarily driven by the agriculture (particularly fungicides) and the animal husbandry sector which account for the majority of its consumption. This report by Expert Market Research entitled “Sodium Chloride Market Report and Forecast 2020-2025” provides a comprehensive analysis for anyone who plans to foray into the sodium chloride market. 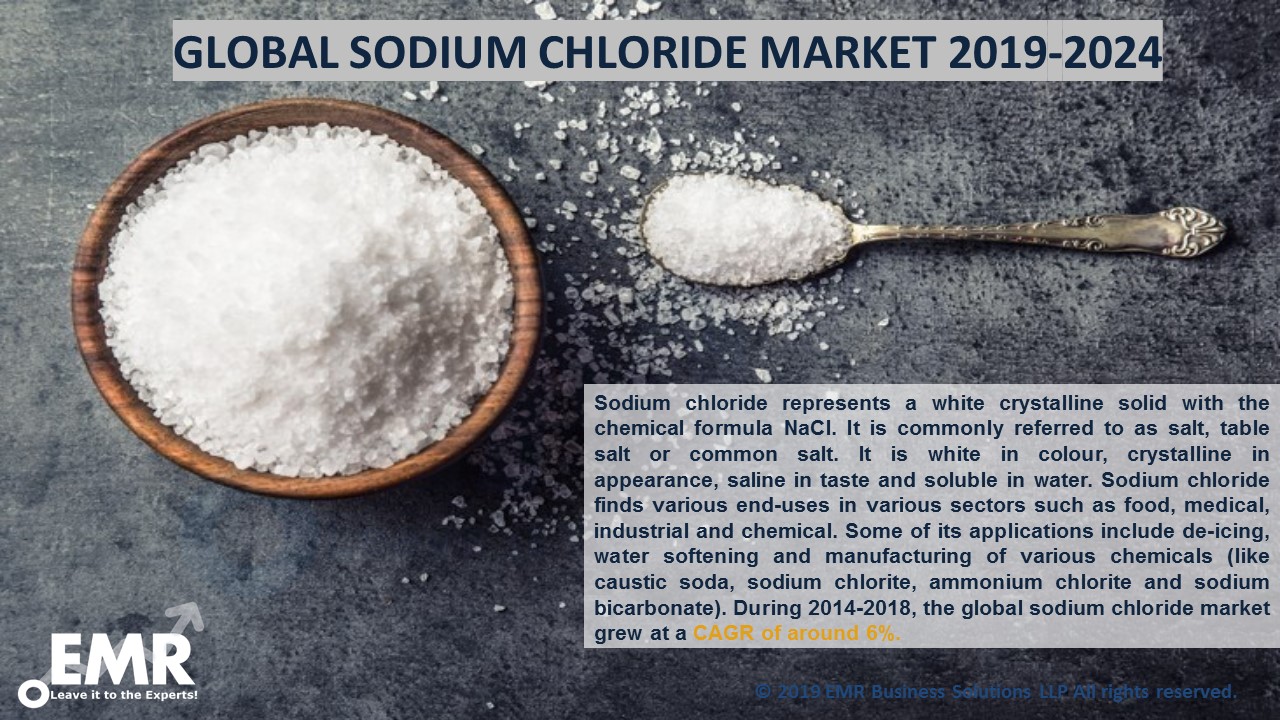 Get a Free Sample Report - https://www.expertmarketresearch.com/request?type=report&id=90&flag=B

The value chain analysis of sodium chloride has also been covered in this report encompassing all the activities in the value chain such as exploration, mining and extraction, production, logistics, sales and marketing and application. Furthermore, the study assesses the market based on Porter’s five forces model, which evaluates the level of competition in the market by analysing factors such as bargaining power of buyers and suppliers, threat from substitutes and new entrants. A thorough evaluation of the competitive landscape of the sodium chloride industry has also been provided. The report also covers the global import and export trends of sodium chloride with the United States of America being the largest importer and Chile being the largest exporter.

This report provides an exhaustive insight into the manufacturing of sodium chloride. Factors such as chemical reactions involved, process flow, raw material requirements, mass balance and various manufacturing steps have been thoroughly discussed in the report. The report also provides a comprehensive market evaluation of the major feedstocks required for manufacturing sodium chloride viz. sodium and chlorine. For each feedstock, the report provides market trends, price trends, market by application, market by region and its key manufacturers.

The Asia Pacific is the leading region in terms of production. The region is expected to continue having a healthy growth rate in the coming years as well. It is among the fastest-growing lime market....

The Asia Pacific, having an 80% of the capacity of ethyl acetate, has a surplus of ethyl-acetate output, which it exports to regions like North America and Europe. The Asia Pacific is witnessing a ris...

The supply market is led by the Asia Pacific region, accounting for more than half of the total share, that is, around 55% of the total market share. The region is witnessing an increased demand for c...

The global sulphuric acid market is driven by the increase in the fertilizers and chemicals industry. The market is expected to be driven by the end-use sectors like the agriculture segment. The acid ...