The global demand for sodium cyanide reached a volume of 1153 thousand metric tons in 2020. The market demand is expected to grow at a CAGR of 6.4% in the forecast period of 2022-2027, owing to the growing mining activities. 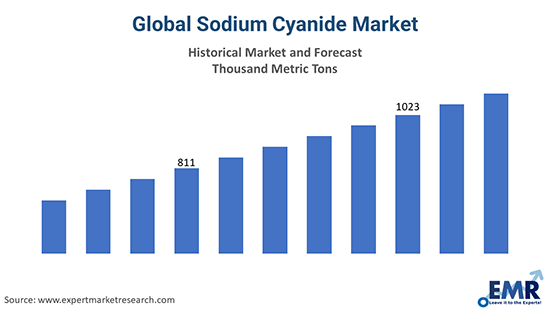 North America follows Asia Pacific as the leading supplier and exporter of the substance. North America is one of the major exporting regions due to its surplus capacity. The region majorly exports to Latin America and Mexico and is a net exporter of sodium cyanide. The region also imports the substance, although in a lower amount, due to the preferences of consumers for overseas producers and specifications of the product grade. The market in the region is being propelled forward by the easy availability of feedstock, as well as the close access to the mining sites. In the forecast period, the industry is expected to be driven within the region by the anticipated increase in capacity for sodium cyanide in the coming years.

Sodium cyanide refers to an inorganic compound with the chemical formula, NaCN. It is a white, clean, and water-soluble solid. Cyanide has a greater affinity to metals, which results in high toxicity of this salt. The primary application sector for the product is in gold mining, which also exploits the high metal reactivity of the product. It is an extremely toxic substance that blocks many metabolic processes and is often used as a test reagent for the role of chemoreceptors. 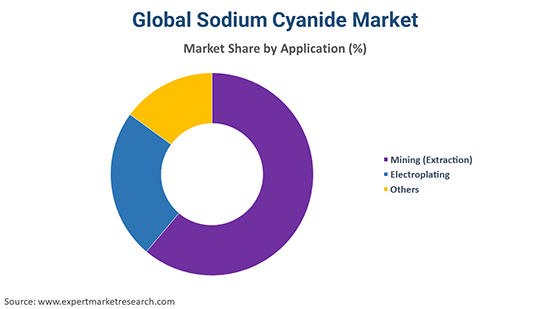 The major applications of the market are:

The regional markets for the sodium cyanide can be divided into North America, Europe, the Asia Pacific, Latin America, the Middle East and Africa. 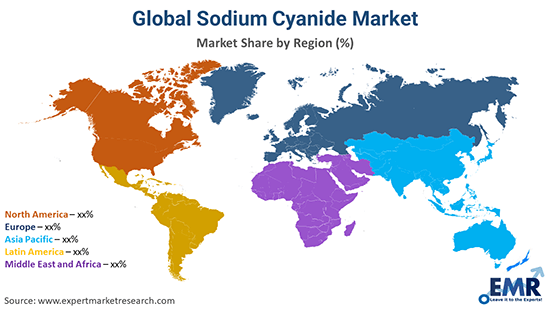 The global sodium cyanide market is being driven by the growing mining activities, especially in the Asia Pacific region. The ever-increasing demand for precious metals like gold is encouraging increased mining in the region, by both national and international mining companies. The easy availability of feedstock, hydrogen cyanide, is further aiding the market growth. The demand for precious metals is aiding the growth of precious metals mining industries, especially in regions like Africa and Oceania, where the demand for sodium cyanide is growing. The mining industry is also witnessing healthy growth in the United States due to favourable changes in the policies; thus, propelling the sodium cyanide market forward. The market is also driven by the growing demand from the application sectors like chemical intermediates and other materials. The use of sodium cyanide in the electroplating industry is also supporting the market growth. Its excellent blending property makes it a useful intermediate in the electroplating industry. Other applications, such as fumigation, silver refinement, steel hardness, and dye manufacturing are expected to drive demand for sodium cyanide during the forecast period.

Key Players in the Global Market for Sodium Cyanide

The report gives a detailed analysis of the following key players in the global sodium cyanide market, covering their competitive landscape, capacity, and latest developments like mergers, acquisitions, and investments, expansions of capacity, and plant turnarounds:

What was the global sodium cyanide market size in 2020?

The market is driven by rising industrialisation, growing mining, and rise in extracting activities.

What are the key industry trends of the global sodium cyanide market?

The key trends in the market are rising demand for precious metals like gold.

What are the major regional markets of sodium cyanide, according to the EMR report?

The major regions in the industry are North America, Latin America, the Middle East and Africa, Europe, and the Asia Pacific, with Asia Pacific being the leading supplier in the market.

What are the leading applications of sodium cyanide?

The application segments include mining (extraction) and electroplating, among others.

EMR’s meticulous research methodology delves deep into the market, covering the macro and micro aspects of the industry. Based on its applications, the sodium cyanide industry can be segmented into mining and electroplating, among others, with mining accounting for the largest market share. The major regional markets for sodium cyanide are North America, Europe, the Asia Pacific, Latin America, and the Middle East and Africa, with Asia Pacific being the leading supplier in the market. The key players in the above market include Anhui Shuguang Chemical Group, Cyanco Corporation, Chemours Company, Orica Limited, Taekwang Industrial Co., Ltd., CyPlus GmbH, Tongsuh Petrochemical Corp., Ltd, Sasol Limited, Unique Chemical Limited, and Australian Gold Reagents Pty Ltd., among others.