Global Sodium Diacetate Market to Grow at a CAGR of 6%, Aided by the Rising Application in the Food Industry

The global sodium diacetate market is expected to grow at a CAGR of about 6% in the forecast period of 2023-2028. 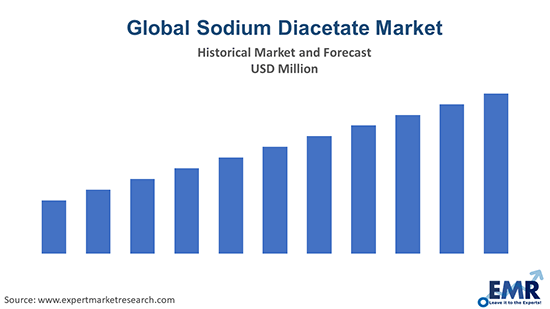 The Asia Pacific is one of the leading regions for the sodium diacetate market. The market in the region is significantly being driven by the rising production capacities in the region, especially in countries such as China. In comparison to Europe and North America, the manufacturing market for the product in China is expected to rise rapidly. In the coming years, the industry is expected to witness a further growth in the coming years due to targeted capacity expansions by players in China. In order to meet the rising demand for sodium diacetate in the overall Asia Pacific region, India, along with other countries in Southeast Asia, are also expected to witness capacity expansions in the coming years, thus, further adding to the market growth. 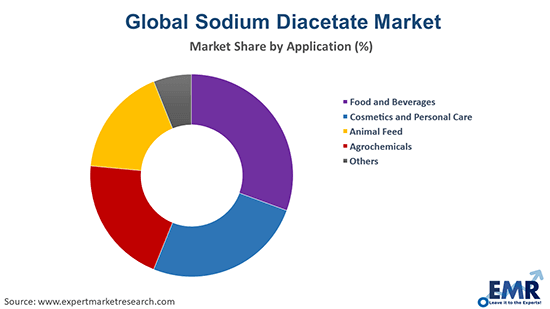 Sodium diacetate refers to the sodium salt of acetic acid. It is extensively used as an antimicrobial agent and as a seasoning in a wide variety of food products, such as bakery goods, pastas, cookies, sauces, dressings, and pet foods. It is also used as an acidity controller in meat and animal products and is further used in food preservation as it inhibits microbial development. It also prevents spoilage of grains by its antimicrobial influence.

Based on form, the industry can be divided into:

On the basis of applications, the industry is segmented into:

The regional markets for the product can be divided into North America, Europe, the Asia Pacific, Latin America, and the Middle East and Africa. 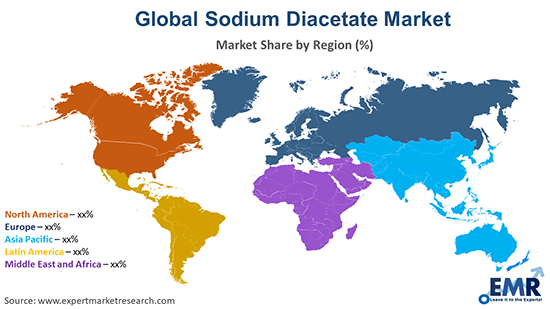 Sodium diacetate is widely used as a bread preservative globally. The rising application of the product in the bakery segment is expected to drive the growth of the market. In Europe and the United States, the industry is gaining traction in the bakery segment. The sodium acetate market is, thus, propelled by the growth of the bakery industry in Europe and the United States. The bakery industry in these regions is witnessing heightened growth due to the rising innovations in the industry and the increase in the introduction of new products like functional and value-added baked goods.

The demand for antimicrobials like sodium diacetate has increased exponentially in the prevention of meat spoilage due to the rise in meat consumption and meat products. This is expected to favourably influence the global sodium diacetate industry. The United States and the United Kingdom are some of the major meat consuming regions, which are supporting the growth of the industry. New products are being increasingly introduced in the market by the meat product suppliers, which are further supplementing the demand for antimicrobials and preservatives, including sodium diacetate.

The report gives a detailed analysis of the following key players in the global sodium diacetate market, covering their competitive landscape, capacity, and latest developments like mergers, acquisitions, and investments, expansions of capacity, and plant turnarounds:

What is the growth rate of the global sodium diacetate market?

The major drivers of the industry, such as rising disposable incomes, growing demand from baked goods, rising capacity expansions, and growing demand for antimicrobials, are expected to aid the market growth.

What are the key industry trends of the global sodium diacetate market?

The key trends guiding the growth of the market include the launch of new meat products and rising demand for functional bakery products.

What are the major regional markets of sodium diacetate, according to the EMR report?

The leading forms of the product in the market are food and non-food grades.

The significant application segments in the industry are food and beverages, cosmetics and personal care, animal feed, and agrochemicals, among others.

The major players in the industry are Macco Organiques Inc., Niacet Corporation, Spectrum Chemical Manufacturing Corp., and Aakash Manthan Industries, among others.

The global sodium diacetate market is being driven by the rising demand for baked goods and meat. Aided by the growing innovations in the industry, it is expected to witness a further growth in the forecast period of 2023-2028, growing at a CAGR of about 6%.

EMR’s meticulous research methodology delves deep into the market, covering the macro and micro aspects of the industry. By form, the market can be segmented into food and non-food grades. Based on application, the industry is divided into food and beverages, cosmetics and personal care, animal feed, and agrochemicals, among others. The major regional markets for the product are North America, Europe, the Asia Pacific, Latin America, and the Middle East and Africa. The key players in the above market include Macco Organiques Inc., Niacet Corporation, Spectrum Chemical Manufacturing Corp., and Aakash Manthan Industries, among others.